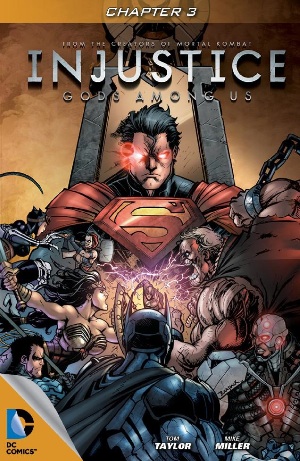 Injustice: Gods Among Us - Chapter #3

"Injustice: Gods Among Us" - Chapter Three

Click to enlarge
Superman won't let Doomsday anywhere near Lois and the baby. He charges the monster and flies off with him into space, leaving the Joker and Harley Quinn behind to make their escape, despite Harley's objections now that she's named their hijacked submarine "Gunter."

Green Lantern, however, stops them with a giant hand construct as he and the other Justice League members that Batman alerted to Lois's kidnapping arrive on the scene. Batman investigates the submarine to find it empty except for Scarecrow's fear toxin. A quick interrogation of the Joker soon reveals that the fear toxin was tainted by Kryptonite and that Superman isn't fighting Doomsday at all. Doomsday is simply a hallucination. And as Batman gets through to him over their communications system and being in space helps to clear his head of the gas, Superman comes to a tragic realization:

He's just flown a pregnant Lois Lane into space without any kind of environmental protection or breathing apparatus, killing her and their unborn child.

Then, as if that wasn't bad enough, it turns out that the operation the Joker was performing on Lois involved connecting her heart to the missile in the submarine: her death activates it.

And Metropolis goes up in a mushroom cloud.

Story - 4: I'd like to think you didn't see that coming. Because I didn't. I was too distracted last week by the green of the gas and the Kryptonite theft to connect Scarecrow's otherwise anomalous appearance (however dead) with his fear toxin being the gas and Kryptonite being just an additive (and, hey, let's blame Smallville for this, too, what the hell?), thus that Doomsday was a hallucination and that it would in fact end up being Superman who kills Lois and their unborn child.

Now, I ask you: Is that, combined with the evident nuclear destruction of Metropolis (or part of it) that he might otherwise have prevented if he had maintained his grip after finding Jimmy, not a sufficiently extreme catalyst to pervert Superman's character? Assuming you don't outright reject such a premise to begin with?

I say "Yea." I'm also incredibly surprised that they got to this point so quickly. Surprised and delighted, no matter how scarred I probably am. We'll do thinking and analysis next week, after this sets in.

Art - 4: New talent, crisper and generally more precise than Raapack but nevertheless replacing, not entirely to the better, Raapack's dark and theme-appropriate roughness with a rather more cartoonish overall vibe. Technically excellent, however, to be sure.