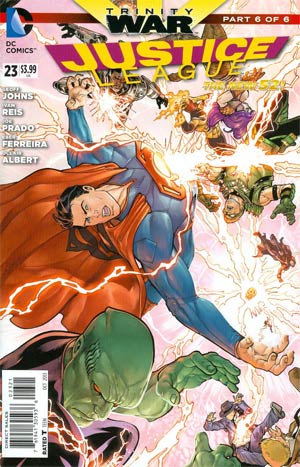 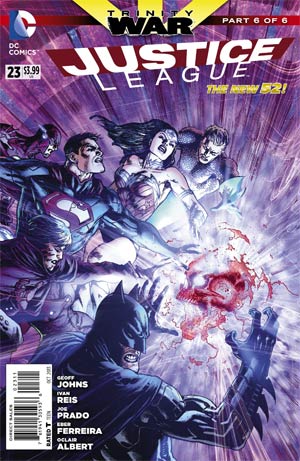 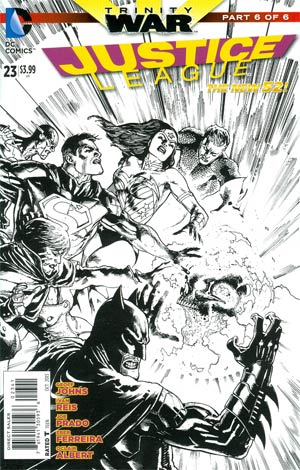 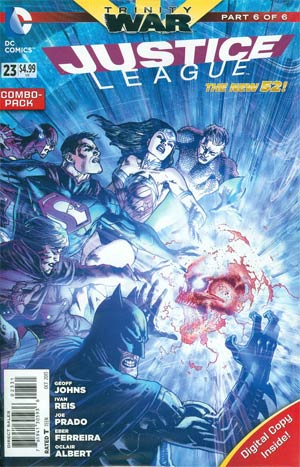 When the Justice League first battled Darkseid, energies were unleashed that weakened the barriers between universes. Two individuals escaped from another parallel universe; a man and a woman. I will have more on their identities later.

This mystery man performed extensive research and uncovered Pandora's Box. He knew where it came from and what it could do. He recruited many Justice League enemies to help with his plan; forming the Secret Society. He planted an agent within the Justice League, to act surreptitiously on his behalf. He began to take the name Outsider. He was serving a master. The true identity of this master will be revealed soon as well.

The Outsider indicates to himself that his plan involves world domination.

Madame Xanadu reveals that the box is a doorway, not a prison, as previously suggested. After several battles in chapter five for control of the box, John Constantine currently has it. The box corrupts whoever is holding it; but does not affect Constantine because he is already corrupted.

Everybody wants the box, and a battle begins for control of that box. Evil is being spread around due to the influence of the box; and all personalities are being affected. Superman says he won't stop until Batman is dead; although Wonder Woman prevents him from carrying out this threat. Steve Trevor says that Superman can "rot" because he took Diana away. And so on.

Wonder Woman wonders why Superman is the only one being made physically sick by the box's influence.

And then answers start to come.

So who put Kryptonite in Superman's brain? Atom confesses to this crime, looking rather pleased with herself. She also reveals that she was the one who triggered Superman's heat vision, killing Dr. Light.

Suddenly, it is revealed that Vic's robotic parts have an evil intelligence; and they separate from his body. This leaves Vic crumpled in a very helpless state; and Green Lantern (Simon Baz) protects him with ring energy.

The Outsider grabs Pandora's Box. He reveals that the nature of the box is not magic; it is science. Pandora did not know this; and the Gods who originally owned the box did not know this either. The box was originally created in the universe where the Outsider is from; but was left on our world. Only someone from the Outsider's universe can open the box. This box is really like a Mother Box; a device that can open a gateway to another universe; in this case, the birthplace of evil, which is where the Outsider is from.

As he explains this, the Outsider opens up a gateway to Earth Three, the home of the Crime Syndicate, an evil version of the Justice League. Wonder Woman reveals that this (Earth Three) is the real, but previously secret, meaning of the Trinity War. Trinity refers to Earth Three.

Suddenly, the Crime Syndicate passes through the gateway, and announces that they are taking over our Earth.

The Trinity War was designed and executed as a grand mystery. Everything that happened for six issues pretty much revolved around the question "What happened to Superman; and who is responsible?" A second important question was the following: "What are the secrets of Pandora's Box?"

Geoff Johns threw us a huge curveball in the final few pages. He has been planning this whopper of a surprise ending all along. And when he springs this on us after we faithfully follow the story for six issues, we can react with elation or disappointment depending on our assessment of the ending and how plausible it is.

I love a good mystery. A mystery really works if there are clues along the way that foretell the twist ending. The ending must be believable. If the story is woven such that a clever reader could reasonably deduce the ending from the clues provided, then it is an excellent story, and my grade would likely be a 5.

You can see by the grade posted which way I went.

I give Geoff Johns an "A" for creativity, but a "D-" for consistency. Too many things just don't add up. This story does not pass the "smell test".

For example, the behavior of Atom. All along, she has been an exceedingly ethical and principled character. In Chapter One, she is the voice of peace, urging others on the battlefield to stop fighting. She seems genuinely concerned about the violence. In chapter Two, she has guilt pangs about spying for the JLA, and wants to confess her sins to Batman. Her behavior seems truly contrite and authentic. And in chapter Four, she actually does admit guilt for spying, looking very sad about her betrayal. So in chapter six, when she gleefully reveals that she put Kryptonite in Superman's brain, and looks proud of her behavior, it just does not add up at all. It is not believable, because it is not consistent. All of a sudden, Atom is really a member of the Crime Syndicate from an evil universe. I just don't buy it!

Another example is Pandora's Box. Pandora opened that box centuries ago, and we are told she unleashed evil into the world through the dark magic in that box. She was punished as a result, and walks the Earth witnessing the evil she has caused.

So now we are told that the box is powered by science, not magic. This is just too much of a deviation to be believable. For five chapters, this band of heroes, including some of the greatest sorcerers and mystics in the DC universe, are fully convinced that magic played a part in Superman's malfunction. And now, at the very end, the story changes, and nobody saw this coming!? How come Zatanna does not detect that the box is devoid of any real magic? She should know! And if the box is scientific in origin, how is it able to cause such bad behavior from the Justice League heroes? None of this makes any sense.

The only member of Justice League Dark who knew the truth about the box was Madame Xanadu, a mystic and clairvoyant. But since she was captured for much of the narrative, this fact was conveniently hidden from us.

Personally I think much of what happened in the six chapters was deliberate misdirection, designed to keep the reader off the track. Geoff Johns was so eager to create the big surprise twist at the end, that he kept dropping false clues, in my opinion.

Trinity War was an intriguing story arc that had a very disappointing ending. I rarely give a score of 1, but this story is seriously flawed.

By the way, who will get the Kryptonite out of Superman's brain? And how long will it take for the effects of the "non-magic box" to wear off. It will be nice when Superman and Batman can be in the same room again without contemplating murder.

Looking ahead, the Crime Syndicate members are dangerous foes. We will see what happens next.

Art - 4: The artwork is strong. Ivan Reis does his usual good job.

Cover Art - 3: Initially I believed that the covers, when placed together, would create one giant mural. Now, at the end, I see that chapters one-three make on mural, and four-six make a separate mural. The covers are crowded, but I like the mural effect.

Cover Art (Variant Edition) - 4: Superman and Martian Manhunter are on the receiving end of some mystical energy. Nicely drawn.