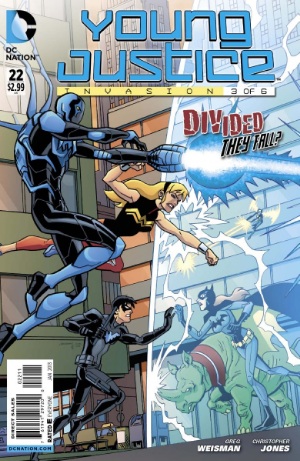 Click to enlarge
Nightwing thinks back to his birthday five years previously but his daydreaming doesn't last and he finds himself in a base in Taos with a now costumed Blue Beetle and Wonder Girl. Dick tells Jaime that his parents have given him permission to join their team provided he trains properly, and as he is inaugurated the team also pick up the transforming super vehicle Sphere and teleport into action.

Meanwhile the kidnapped teammates realize they are on the moon and though free from the prison room they are far from safe as they have no way to get home to Earth. En route, Lagoon Boy and M'Gann are traveling as fast as they can in an attempt to rescue Superboy and the others.

Back on Earth, Nightwing arrives with his small team to meet Zatanna, the Flash, Atom, Plastic Man and Martian Manhunter who are trying hard to break into the bubble surrounding the city. All attempts seem futile, no magic, no super speed, not even miniaturization can get inside. Plas drills under the barrier and reveals the strange force shield is a bubble that extends all round the city.

Inside the city, Bee and Garth have hidden Ms. Harjavti in an understated bar, owned by a friend of Superman... Bibbo! The bar is a good place to hide out from assassins and so they wait in safety till the force bubble is removed.

Otis informs his boss, Lex Luthor that their facility was literally sliced in half by the bubble and in doing released Project Match, a bizarro clone of Superboy. Back on the moon Superman admits the strange crystal surroundings are rendering his vision powers useless so Captain Marvel theorizes that Captain Atom might be able to use his skills, specifically his quantum vision to track power signatures and in turn the vehicle that brought them to the moon.

As the Captain is about to try, Kylstar arrives and teleports them into a small prison cell. Their new owner cannot speak their dialect so enlists the help of a droid orb. The orb is very 'black and white' but does let slip that they are preparing for a journey. It is then that the crystalline walls begin to shake and shudder, rising from the moon's surface to become a space cruiser. From nearby M'Gann sees this and prays that she can catch them before they enter light speed as her bio ship isn't equipped for such travel.

Back on Earth, Brainiac's ship places itself directly above the force bubble around Metropolis and fires a beam of energy at it. From the inside the people watch but the beam doesn't seem to do anything but electrocute the outside forcing back the heroes outside trying to get in. This leads to Atom realizing the force shield is being activated by tech inside the city.

Nightwing uses his wrist computer to instant message Batgirl that the probe that landed needs to be deactivated. Barbara acknowledges and Black Lightning takes up the challenge but as she now has his attention she uses her own tech to wish Dick a happy birthday. While Dick dreams of his birthday five years ago, Martian Manhunter advises that that they approach Brainiac's ship and confront him (though they are still unaware of his identity). The Flash and J'onn levitate to the ship in hopes to reason with their attacker but quietly behind them Zatanna has cast an invisibility spell in a floating bubble and inside, ready to fight are the remainder of the Beta Squad itching for a fight.

Story - 5: I've said it before and I'll say it again: this is the best book DC is publishing right now.

It reads like a brilliant series of episodes and keeps the reader's attention throughout. The only thing I would say is it would have been nice to have a last issue box as this is part of a big six issue farewell event. With all the controversy of erasing Milestone characters I had honestly forgotten some of the events since last issue especially with so much going on and flashbacks thrown in too. I am also really disappointed that a) this quality of writing is not in a DCnU book right now and b) this story will end the series forever.

Art - 4: Fantastic art in places and faint in the others... due to the massive reworking possibly? I'm not sure but in some panels the inks seem very light and almost rushed. Over all the art remains high in calibre. I will be following Christopher Jones career after this series that's for sure.

Cover Art - 3: The cover for me is the let down. It shows an event in the story which is a plus point but it seems too flat, the cover angle just doesn't seem as dynamic as it could have been... Still it does still look nice just not as eye catching as it could have.