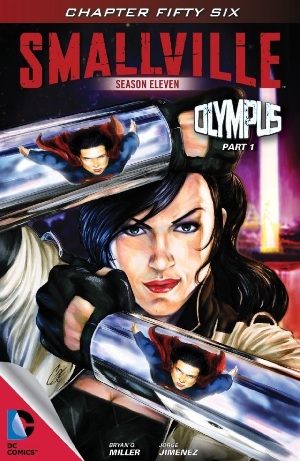 Click to enlarge
It's twenty years ago and a young boy has washed ashore on some tropical island. Face down in the surf, he is greeted by a sharp rap to the head from a spear wielded by a young girl who tells him that men - or boys, which as she understands it are just much smaller men - are not allowed on the island. The boy introduces himself as Steve Trevor but before she can tell him who she is, she is alerted to the sounds of galloping horses and urgent voices. "My name is Diana of Themyscira," she then says, taking his hand and running into the water, "and you, Steve Trevor, will be my secret boy!"

Fast forward to today. There's a familiar-looking dog barking through a Washington, D.C. residential window. He's barking at the woman on the walkway and maybe also at the limousine that has just pulled up. A voice is heard: "He's ready for you, Senator Kent." The woman, Senator Martha Kent, gets in the car, where she meets Director Bones of the D.E.O., who commends her on getting the Vigilante Registration Act overturned (Season 10) and on her clear connections with the "supers and capes" community and offers her a job on his team when her term in government is up. She makes no promises.

Just then, the car screeches to a halt because a hooded figured has appeared in its path. Gun-toting companions, at the figure's command to "Converge," emerge from the shadows and open fire on the car. Bones shouts at Martha to get herself to safety and that his team can handle this, but before Martha can even move a woman in white arrives on the scene, fells the hooded figure with a manhole cover hurled like a Frisbee, blocks the bullets from one of the figure's companions with her bracelets, and otherwise ensures Martha's safety. Bones escapes, which prompts the hooded figure and his companions to leave, via mass teleportation.

Soon after, Martha calls Clark in Metropolis, who levitates with Lois curled into him while he sleeps. Martha is clearly shaken, but she is not hurt. No, she is more surprised at having been saved by someone she does not recognize.

Story - 5: I confess that I do not know whether there is a precedent for Steve Trevor arriving on Themyscira as a child (or Paradise Island, for that matter), but nor do I much care. They could be in Kathmandu for all it matters: the scene here simply works. It's an organic fan moment, shows both Trevor and Diana to be strong of character and is... well, gosh darn it, it's cute! I'm afraid I'm going to have to insist, Smallville, on more Jorge Jimenez. His work mostly carries this scene, but the dialogue is fine, too.

I confess as well that I'm not sure whether or not I'm supposed to be familiar with the crew of teleporting villains - which is to say that I am not (familiar with them) but that I'm hoping they're just a Miller invention. Fresh is always worth a chance, and these guys are no exception.

Otherwise, this was pretty solid. Nice to see Martha back (and Shelby), though her dialogue was ever so overly expositional for my taste. "I acted as Red Queen when Checkmate went down..." Eh. Thanks for the reminder, Smallville. But I guess not such a big deal secret role for her, after all? More like the Red Hood from The Killing Joke - just another in a long line of stand-ins? Weird choice. There's a case to be made that it characterizes Bones as having especially secret clearance (which, since he's the director of the Department of Extranormal Operations, makes some kind of sense) but it reads like leaden exposition. Thus my distaste. But, in the overall, it's a minor annoyance.

The Wonder Woman appearance, meanwhile, has been public knowledge for weeks now, so there would have been no need for any kind of surprise reveal. Opening the chapter on her, as a child or not, was thus an inspired move. Good Smallville version of her outfit, too. (Frankly, one of the things that have kept me from being a reader of Wonder Woman books is that I do not like her usual outfits, with the tiaras and stars and whatnot. Same for Captain America. Say what you will about that.) I am going to be pretty bummed if Clark is tempted by her, while probably equally bummed if she isn't tempted by him. And let me be clear: that's truly not any kind of mindless sex or gender expectation on my part viz. Wonder Woman, or really either of them. It's that for most of this narrative's life, Clark has been romantically/sexually conflicted. But if he's fully matured into his commitment to Superman, then by golly he'd better be equally matured in his commitment to Lois.

I mean, don't you agree?

For her part, on the other hand, Wonder Woman will almost certainly have never before encountered a man like Clark. I would think he would compel her at least to some genuine examination of whatever edicts or values or cultural whatevers required her to make a secret out of young Steve Trevor. It doesn't have to be sexual, exactly, but if she is not attracted to Clark in some profoundly new-to-her way, I will be both surprised and underwhelmed. I expect. There are certainly good kinds of surprises, too.

Cover Art - 4: Oh, sweet jeebus, there's going to be a Superman/Wonder Woman FIGHT™, isn't there? Great freaking art, though! Point off is for the implied story circumstances, which matter. This isn't school.