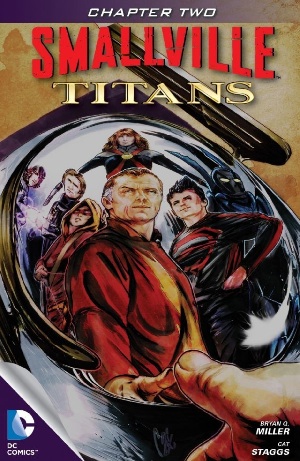 Click to enlarge
Back at base camp, former Flash Jay Garrick gives the Titans a lecture on Bart Allen aka Impulse and his sacrifice which inspired this team, he tells the kids that they are not yet ready for field work. Connor, Superboy, argues with Jay that they are ready to go and help people, but Jay disagrees and races with Connor to another part of the room where he asks Connor a serious question, will he be a Luthor or a Kent?

Later, Mia (Speedy) reveals to Jayna that the only reason she joined the team was because Chloe and Dinah (Watchtower & Black Canary) told her that she should, also revealing that Oliver (Green Arrow) hasn't really been there for her thus far in her superhero journey. Jayna tells Mia of when her father kicked her and Zan out of the house when they were young and that they have been living on their own ever since, reminding Mia that what they have here isn't so bad. Jay shows up and tells Jayna that if Bart could outrun his past, that they can too. Before Jay leaves, he makes a promise to Bart that no matter what he would not give up on this team.

Elsewhere, on the bridge, Connor catches up with Megan (Miss Martian) who talks about missing her home on Mars and reminds Connor, after a kiss, that once she's done here on Earth, she plans on rejoining Martian Manhunter on their home world. Connor confides in Megan that things weren't working out the way that he planned as he was being raised by Martha Kent, until he was given the opportunity to be a part of something bigger here.

Back in the compound, Jamie (Blue Beetle) walks into Zan's room and to his surprise finds Zan bleeding all over the floor. Then, from behind Rose Wilson uses a sound weapon on Jaime, preventing him from turning into the Blue Beetle and sending him to the ground.

Like I said last week, I'm really enjoying this arc as it ties in Young Justice with classic Teen Titans and classic Smallville. Last week's chapter was very heavy on the action and the (re)introduction of characters. This week's chapter took the story one step further and dove into the characters a bit more. We got some great origin material with the Wonder Twins (finally!) where we find out that they are NOT in fact aliens (or are they?...) as well as some backstory on what Speedy has been doing since we last saw her (not counting "Hollow") in Season 9's "Disciple". Plus, further explanation on why Superboy isn't with Ma Kent.

What I really enjoyed about this chapter was the beginning where Jay recounts Impulse's life from "Run" to "Justice" to "Haunted"! Very cool! I was also pleased by the Bart Allen statue (something that the Titans do for their dead in the comics) and by Jay's promise realizing that he had failed his sort-of "protégé" and that he won't do it again.

The Superboy/Miss Martian pairing always pleases me as I have not only always hated the Superboy/Wonder Girl pairing, but I loved how the "SuperMartian" relationship was handled on Young Justice back when that was still on. (Yes, I am still a bit bitter.)

The "tactile telekinesis" was a nice touch as well.

Now, I was disappointed that Oliver Queen/Green Arrow hasn't been living up to his mentoring duties with Speedy, as it seemed that that was going well back in "Detective". I was sad to hear about that.

Ultimately I really enjoy this story, I look forward to finding out what the beloved Ravager has planned for Zan and Blue Beetle and what her motivations are. If it's about her father, she should be going after Superman not the Titans, but either way, I'm looking forward to it!

Art - 3: Overall, solid artwork, but why does Blue Beetle always look like he's sad? I mean really, if the Scarab is so powerful, the least Jaime could figure out how to do is to slim the suit down a bit!