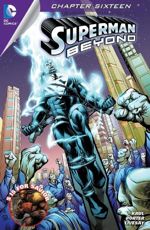 "S is for Savior"

Click to enlarge
After a brief recap of Superman's previous involvement with the inhabitants of the planet Trillia, we're brought up to speed on current events. The Mangals have invaded Superman's cell to rescue their savior from the Trillians. Free of his binds, Superman finds himself unable to control the firefight between the Mangals and Trillians. In order to stop the fighting, Superman decides to join his would-be disciples and takes off with them in one of their crafts.

In the wake of the fighting, one of the Mangals is captured by the Trillians. This POW, to the devious pleasure of the Trillian president, may prove useful in revealing the Mangals' elusive forest city. Worse still, the president aims to put into action an unfinished weapon of immense power, risking the existence of the entire planet.

Deep in the afforested habitat of the Mangals, Superman is tended to by a Mangal named Skirg. Kal-El learns just how much the feline-like people revere him. He truly is a messiah to them, and that makes the Man of Steel uneasy. Compounding the disquietude is the answer to Superman's question of why the Mangals appear so differently from his memory. It seems that when Superman saved the Mangals from their plight they were all children. The adults, Skirg reveals, were all murdered at the hands of the Trillians.

Story - 3: This is a quick entry in the story. It reveals essential details, such as the weapon and especially that all the adults in the previous Mangal generation were murdered. They're not presented matter-of-factly, which is fortunate giving how integral they are to the plot, but they don't feel as deep as they could. Honestly, I blame the art for this, but more on that below.

I'm still thrilled with the direction of this story. Things are unfolding in what is becoming a quintessential manner for this title. Superman Beyond remains one of the best superhero titles on the market; however...

Art - 1: ...the art remains among the worst these eyes choose to endure. I read a lot of comic books each month. My pull list contains about 25 titles, many of them independent comic books from part-time creators who don't have the opportunity or luck to break into the upper ranks of the industry, and all of those have better, more consistent art than Superman Beyond. Porter's art was so flat, weightless, and uninspired in this issue that it performed a rare and exceptional feat: it ruined the script. The final panel is the prime example. That reveal is so important that it demanded a griping, tense artistic presentation. Instead it just looks like a bunch people standing around a bus stop. No more excuses for Porter.