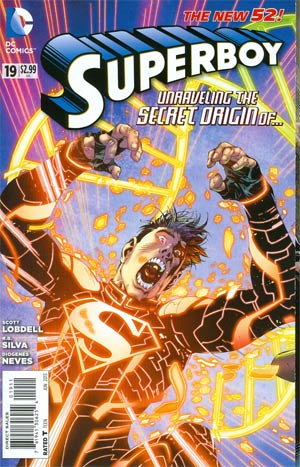 "Gone But Not Begotten"

Click to enlarge
Long ago, in the 30th Century, Colonel Harvest led the fight against metahumans.

The Echo Team had waged a war against the rising number of metas for the past twelve years. Their number were growing so much that mere mortals were dwarfed in comparison and it had all begun in 2009 when the world's first hero, Superman arrived on the scene.

Harvest and Echo agents fought valiantly and the heroic Harvest had been trying to raise his son Venn amongst the violence. One terrible night the metas kidnapped Harvest's young son and murdered him.

Vowing then to obliterate all superhuman life, Harvest broke into to the Science Police laboratory and attempted to use their time travel equipment on himself. Time bubble tech had yet to be perfected and the experimental equipment killed all the lab workers and bombarded Harvest with chronal energy.

Harvest jumps back into our future to when Lois and Clark have a child, Jon Lane Kent. The young boy was the embodiment of happiness and the perfect future for Lois and Clark however Jon's DNA was misaligned and he soon began to die. Not even the mind of Lex Luthor could help save him.

With the passing of Jon, Lois and Clark decided to never again leave the Fortress of Solitude and were never heard from again. It is at this point that Harvest intervenes. Traveling back in time to this point the Colonel had been gathering technology that he knew would be able to save Jon by realigning his DNA.

Taking Jon for himself Harvest raised and trained him as his own son and perfect soldier. As he grew older, the boy became the most powerful of them all and turned the tide in the war against metas, even killing Steel to protect his 'father'. Harvest may have hindered the misaligned DNA in the boy but he hadn't stopped its effects much to his horror as his new son fell into a coma. Worse still the chronal experiment that Harvest had absorbed had literally been rotting his own body away with each trip. With only one chance to save Jon, Harvest travelled back to collect fresh DNA to build a clone who he would use to save Jon in the future.

The Chronal energy was only enough to send Harvest back to the day of Superman's debut (DCnU Action Comics #1) and biding his time Harvest was able to extract at least some of what he needed when the government captured Superman. Rebuilding his body with all kinds of horrific armor, Harvest next formed the organization N.O.W.H.E.R.E.

With the Culling set to find the strongest of power and will to train this new raw Superboy where Harvest was now physically unable to do. The Ravagers were the result but something else happened at that time that altered Harvest's plan. He discovered at this point that the future was completely malleable when Superman chose Wonder Woman to be his lover instead of Lois Lane.

This change in history resulted in Harvest abandoning his plan to clone Superboy and focus on the Ravagers and their assault in the heroes of the first wave. Something else happened at this point that shocked Harvest, with Superboy threatened with termination he displayed power levels that were even more than Jon's in the future.

Harvest then began some masterful puppeteering of the boy, allowing him the illusion of escape and pointing him towards veiled training, allowing him entry to the Teen Titans to aid his honing of powers. Harvest maintains full surveillance of his creation to the point he knew of Luthor's implantation of a subliminal hologram and even the odd little Dr. Psycho. Psycho to Harvest is irrelevant but Luthor he notes, should be cautiously monitored.

H'el offered even more to the new time alterations and when he attacked Superboy on a genetic level he unknowingly unlocked the cure for Jon in the future. Harvest notes he is now an old weakened soldier and that he may be perceived as a villain, but deep down he is just a man doing all he can to save his son.

Story - 5: So we have some huge revelations to deal with!

A massive game changer for many and for others some fearful echoes of Spider-man's clone saga. For me it's great that the mix has had a shake up, the book has needed it and this new story that has been under the surface has been a master stroke in keeping me hooked. I am sad for Superman and Lois who seem never to ever be destined to have what they seek and the fact that their legacy will become the ultimate weapon of destruction is a sad end to his legacy but then we find that the DCnU is undergoing changes as we speak and the kiss with Wonder Woman started a chain reaction that has ultimately changed Superboy, his backstory and his future.

Like a good soap opera the truth will come out someday and I am now along for the ride for when that happens!

I still don't like Harvest and hope Lobdell will now use what Tom DeFalco built upon to give Superboy a personality and life. And this in my opinion is the one last piece the title needs for a solid series.

Art - 4: The change in art is well suited to this chapter which is not really a Superboy one but a Harvest special (maybe better suited to the Annual). The splashes and superb layouts really married well with the revelatory elements of the script. Kudos to the art team here.

Cover Art - 5: I wasn't a fan of the cover at first, thinking it was yet another 'Superboy in agony as he's torn apart' cover, which is a concept that's becoming old hat with the book. And I would have rated it as such if not for the revelation offered by the fold-out and the sharp intake of breath from it was enough for me to rate it a 5/5. It might not be true in a technical basis but hell it was enough for me to be really excited to read through the book so it was a win all round!