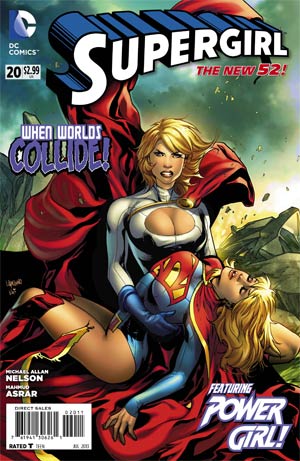 Click to enlarge
Power Girl and Supergirl have entered Sanctuary, the Kryptonian stronghold that serves as the latter's underwater hide-away. Kara believes Karen is too old for the outfit given to her by the Maid of Might's wardrobe. The artificial intelligence in Sanctuary believes that one of the Karas is a clone. However, both ladies are surprised that its chromo-scan has identified Supergirl as "Not-Kara". Worse yet, the Lost Daughter of Krypton's only haven from the recent madness believes she must be eradicated. Power Girl will have to work fast to rescue her other self.

Because Supergirl would not follow a path of blue lights to her death, giant robots and Sanctuary itself are attacking her. Power Girl has been thrown out and is currently on the ocean floor trying to return inside to save Kara. As Neural-Scions attack the Maid of Might, Sanctuary explains that a mathematical equation allowed it to believe Supergirl is the clone. More of the Kryptonian structure is bounding and trapping Kara in the meantime as Power Girl unsuccessfully tries to get the A.I. to not kill anyone. Can either heroine come up with a plan to stop Sanctuary before it exterminates them?

Supergirl asks Power Girl to freeze Sanctuary as she frees herself, and things literally heat up afterwards. The Lost Daughter of Krypton's Fortress of Solitude has been destroyed as a result of their team work. The explosion hurls Kara onto another part of the ocean floor. She awakens as Power Girl carries her out of the water. Supergirl weakly tells Karen that she still believes she's too old for her current costume. With that, the Lost Daughters of Krypton enjoy the sunrise in space as it approaches Earth. Supergirl is reminded of Krypton's sunsets when she see it. As the two Karas bond further, a giant robot from Sanctuary walks the bottom of the ocean with the only objective to eradicate what it thinks is Not-Kara.

Story - 4: This is a good start to Michael Alan Nelson's run on the series, and it does raise some interesting questions, which I hope are answered in the issues to come. Yet I have to wonder one thing. What in the samhill took Sanctuary so long to hypothesize that Kara was a clone? Surely there were some genetic traits in its database that would have told it the difference between a clone and a regular Kryptonian right away. Granted, with "H'el on Earth" going on in the past few months, there hasn't been much of a chance to deal with Sanctuary. It's possible Power Girl's presence triggered a glitch. Still, the whole clone thing feels too sudden and pulled out of the air at this point in the comic.

Normally, the transition period with a new writer takes time for me. This happened with X-Men and Marvel's Conan after Chris Claremont and Roy Thomas left their first runs on those series. Yet Nelson's style fits well with what Mike Johnson did for Supergirl. That helps a bunch to enjoy the series more in my opinion.

One of Michael Alan Nelson's strengths in this issue was the relationship between Supergirl and Power Girl. I hope we see more of that as this story progresses. It's one of the things that made this book fun to read. The overall product isn't perfect, but it's a good beginning to what I hope is a long run for this writer.

Art - 4: While good as usual, there are some images drawn by Mahmud Asrar that just don't look right to my eyes. In spite of that, this issue shows his strengths as an artist with science fiction, robots and alien environments like Sanctuary. Asrar should be used more in comic books.

Cover Art - 5: What can I say about this image? It's incredible. It really made me impatient to read the comic. Every cover should do that in my opinion.