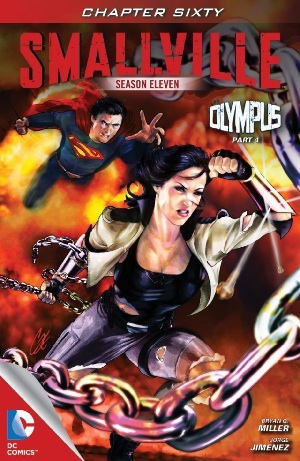 Click to enlarge
DEO Director Bones and General Same Lane discuss mutual concerns at the church where the Harpies attacked Lois and Diana. Lois and Steve Trevor discuss their past and the new "Wonder Woman" on the scene. We see the moment ten years prior when Diana first left Themyscira to find both her mother and Steve, despite the efforts of Artemis to prevent her departure. Back in the present, Clark finds Diana at the Marston Home for Wayward Girls and lets her in on the secret identity; they talk about her mission until Tess contacts Clark and directs them to the site of Faust's recent ritual, where Diana decodes a message that reveals her mother is still alive.

Story - 3: A whole lot of new plot deployed in this issue, but, except for the brief moment in the Girls Home where Diana expresses her philosophy of conflict resolution to the two quarreling mothers, not so much character. It's good to see the Luthor connection (since he's still "the villain of the piece"), but most of the rest of what's here is the mostly-necessary-but-plodding stuff between points A and B.

Art - 4: Steve Trevor looks pretty much exactly like Oliver Queen. And that sucks. Fine, they're both blonde, but surely that isn't the reason they're in this thing. Bulk Trevor up, Smallville. Or give him a different hairstyle or fashion sense or something.

Cover Art - 3: Meh. I like that both Superman's and Wonder Woman's gazes lead off-panel forces the viewer to consider what's not shown, and that the basic neutrality of the image is appropriate for a cover that will be used for three successive chapters, but otherwise I'm just kind of underwhelmed with this one.