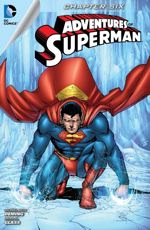 Click to enlarge
Superman is informed of the existence of a child who is bound to grow into the cosmos's most feared and notorious scourge. The Grey Guardian, a member of the Time Corps, brings Superman to a moment in time long before the child's adulthood to wrest the infant from the grips of Babul, a galactic pirate who aims to raise the child as his own and aid him in dominating the universe. Kerry Quinn, the scientist who manipulated the proper fusion of ritual and quantum technology to bring the child to Babul's stronghold, stands proud of his achievement but not of Babul's intention.

With a little help from Quinn, Superman and the Guardian take down Babul and rescue the child. It is revealed that the child is in fact the Grey Guardian, and his remorse over the wickedness he poured over galaxies forced his journey to the only one who could make sure his crimes aren't committed to the annals of history. That one is Superman, the Grey Guardian's father.

Superman is unwilling to send the infant back to Krypton where he'll simply perish in the planet's destruction. Instead, Quinn tweaks an escape capsule to carry the infant to a distant era where he'll live. The Grey Guardian, his history now rewritten, vanishes.

Elsewhere on a far away planet, a kindly couple finds a crashed capsule and a baby swaddled inside.

Story - 2: Phew. Talk about going through the motions. There is so much generic material whipping around this issue it's hard to focus on the decency of the story's idea. From your regular, garden variety villain to the misuse of time travel, I had a hard time settling comfortably with "Best Intent".

I generally like time travel stories. I like them a lot, actually, but I note that they're hard to get right. There are some mighty fragile eggshells to be cautious of, and unfortunately Glass and Oeming just smash right through them. There's simply too much convenience. For example, when Superman asks the Guardian why the time traveler doesn't travel farther back to prevent the infant's birth, he's answered with the pompous equivalent of "Ease up, dude. These things are spooky and hefty and they can blow up really big important stuff." I'm calling cop out on that. It seems it occurred to the writers that readers may ask this question, so instead of actually giving a reason, they decided to get nondescript.

Honestly, I think there's a lot of potential in this story, but it's another victim of the square-pegs of digital comic books: too little space to tell a story. Glass and Oeming had a grand idea, but were only given twenty digital pages in which to tell it. Their idea suffered as a result, and what could have been a good three-parter was instead a forgettable one-shot. And that's another thing! Why are the single-issue stories listed as "Part 1 of 1"? I'm I being picky? Ya got that right! Writing "part 1 of 1" bothers me.

On the good side, this issue has some crystal dialogue. Superman's "...you and I are going to have more than a polite discussion" rolls off the tongue. Quinn stands out though. His rhetorical question of whether or not the typical bad guy understands the complexity of what needed to be done to get the infant to the ship is brilliantly self-answered: "Of course not! You're a baboon." No exclamation point, that's the kicker. His isn't exclaiming it, he's stating it. It's made funnier by the next panel when we find out that the yawn-worthy baddie's name is Babul.

Art - 3: I like this cartoonish, sometimes goofy art. The characters are rendered with oversized hands and just a handful of facial expressions, but it underscores the entertainment the story is supposed to deliver. In that regard, 'Best Intent' can be enjoyed just a smidgen more.