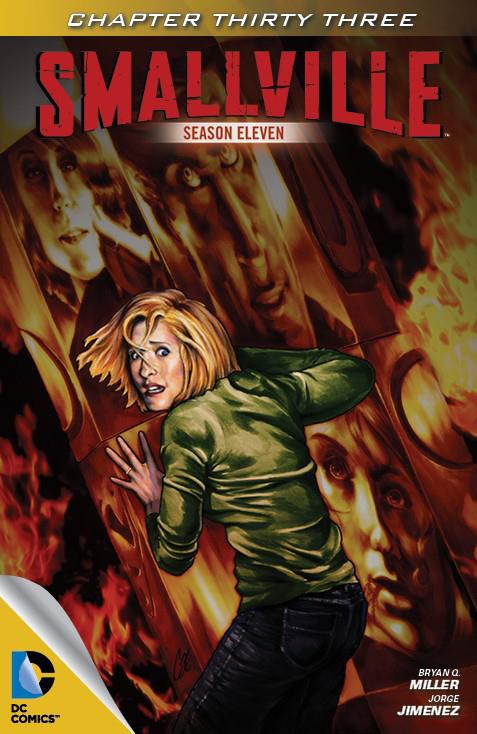 Click to enlarge
A boy in Mumbai reaches to retrieve his wayward soccer ball, which lies in the grass amid crackling speed force. In France, that same crackling finds a police car, and then the policeman leaning against it. At the Watchtower, Oliver and Chloe are monitoring these fatal "speed incidents," which are apparently increasing. Oliver gets Superman on the line to keep him posted while he and Impulse are out in the Utah desert in search of original Flash, Jay Garrick.

Meanwhile, back at the Watchtower, Chloe has a moment of confusion and slips into a kind of trance, in which she seems to relive (as opposed to simply recall) Chloe-2's six-year-old memories of Ultraman/Clark Luthor slaughtering meteor freaks in the hallways of Smallville High School before she drove him away with Kryptonite. "Why is it always me?" she mumbles, still unconscious, on Earth One.

Back in Utah, Jay Garrick gives Bart the gears over Bart having stolen Jay's identity a few years prior (see Season 4's "Run"), which Bart explains he has no memory of having done. Nor of anything from his life prior to gaining his super-speed. He explains there was "this big flash of light" and then Jay's name was in his head, along with "Wally West" and "Barry Allen."

Bart asks Jay if he knows about the "Black Racer." Jay, it turns out, has an intimate familiarity with the "monster," to the point where he stopped running (presumably by allowing a broken leg not to heal correctly) to avoid the encounters. Superman tells Jay that "speed storms" are breaking out everywhere Bart has been, killing people in the process. Jay says he survived the Racer by stopping running. When Bart says that's not an option, Jay tells them the answer is simple:

Story - 4: This was a good outing, heavy on active forward motion and full of character. My only real complaint is that most of that character isn't Superman, which is a bit of an issue I've had with this entire arc so far.

Now, let's be clear: I don't mean by that remark that Superman isn't acting like Superman. It's that he's been relegated to a supporting role and isn't himself experiencing any kind of haunting whatsoever. That irks me, just the way it irked a lot of us back when Oliver seemed to be more the main character than Clark on the show. I get it that it's called "Smallville," not "Clark" or "Superman" or "Superboyz 2 Men" or whatever, which thus leaves it free not to be 100% exclusive to Clark. And that's more than fine - Clark needs a well-developed supporting cast if his character is to matter. But that's the thing - it's also not called "DC Village" or "All-Star Luncheonette" or something fundamentally general and character non-specific: it's called Smallville and is thus implicitly first, foremost and forever about Clark/Superman.

In "Haunted," though, Superman is both (mostly) only along for the ride and not even truly in the recently added parallel stories. I'm not suggesting it be the case that everything and everyone is constantly focused exclusively on the Man of Steel, but I do think he should always be more than a helpful bystander who's own principal conflicts (e.g., the radiation and his separation from Lois) are largely on the periphery. It certainly doesn't seem to be the case, as Miller put it to TV Guide in December, that "Everyone in our story is being haunted - physically, metaphorically - by some element of their past" (emphasis mine).

That said, I do allow that Clark has been an active influence on Bart's progression through this trial and, as such, we are getting to see him develop his leadership role. That definitely counts for something. And, I mean, I guess you could say that Bart is haunting Clark, since technically haunt as a verb can be removed from the supernatural sense (of ghosts and whatnot) in which it's clearly otherwise being used here.

But that would still be the main character getting the much more boring end of this stick.

Art - 5: Another supremely strong effort from Jimenez. I'm really digging this guy's work and, like I said before, I hope he sticks around for a good while.

Cover Art - 5: I love this cover. Fantastic likeness of Alison Mack and just lots going on otherwise. Good good. It's too bad the faces of Tess, Lois and Clark Luthor reflected in the facets of the Mirror Box are really only visible when viewed on a proper computer as opposed to a tablet, but I was loving it before I went to my Mac for a second look (a new "best practice" I implemented after "Haunted #1" and my discovery of just how much can get cropped for tablet formatting).