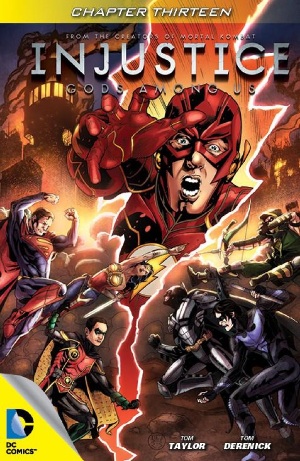 Injustice: Gods Among Us - Chapter #13

"Injustice: Gods Among Us" - Chapter Thirteen

Click to enlarge
The Flash is running across Australia's Nullarbor Plain and trying not to think about the state of the world. He comes to the 90 Mile Straight, a "speedster's nirvana," and just wants to run.

He doesn't want to think but he can't help himself. He remembers the protest, two hours prior in Melbourne, at which local superhero Galaxor (a.k.a. Mitchell Davies) tried to turn the tables on Wonder Woman and Superman, who had threatened to force the protesters' dispersal to their homes and businesses, but was severely overpowered and ended up with multiple broken vertebrae while the Flash just stood by and let it happen.

As the Flash leaves to get an ambulance, Batman contacts him on his communicator and tells him that an ambulance is almost already on the scene and that he should go instead to the Advanced Sciences and Genetic Testing Laboratory in Canberra. Once there, Batman says he hasn't "given up" on the Flash, who is otherwise "on the wrong side of this." The Flash then meets Doctor Norris, who intimates that Galaxor was engineered and shows the Flash his room. Davies, it turns out, is a fanboy who even has an autographed picture of himself and the Flash over his bed and pictures of other heroes elsewhere on the walls.

While the Flash reflects on his inability to remember having the picture taken, Batman on the communicator says, "How do you think he felt in that moment, Barry? When his idols broke him?"

And the Flash is gone again. He encounters a dead kangaroo on the road, killed by a road train truck whose driver "couldn't have slowed down" and "probably barely noticed." But the Flash has slowed down now, and he sees Galaxor's broken body in the kangaroo's place. "What the hell are we doing?" he asks, bent to one knee, overcome.

So he runs. And tries not to think.

Story - 3: Quick, what does a straight road symbolize? Further, what might the emphasized desire of the "fastest man alive" to run but not think stand for? And where are we in all of this?

The fact that I'm even asking these questions is a good sign, I think, but, honestly, try as I might, I can't help but see that road and Flash's desire not to think as Injustice imploring us to do the same - we're in the home stretch, I guess, the shortest route between two points: the comic and the game. Just pre-order the damned thing already!

I'll pass on the not thinking, thanks, but nor am I going to dwell on too many details, such as the S-shield burned into the ground at the protest. (Nor am I going to get into a comparative analysis of Injustice and Dante's Divine Comedy, which, in Inferno [and I'm afraid it's been too long since I read it to be able to say I recalled this naturally], has a straight road to "virtue" and "heaven," to go astray of which can lead you to "hell," but I encourage you to do some of that kind of thinking for yourself. It's good for you.) Wonder Woman and Superman are now altogether locked into their "benevolent dictator" roles and my position continues to be that this story has devolved into a pretty conventional coup d'état kind of narrative. It hasn't surprised me in a long, long time and I'm sort of getting anxious for it to just be over already.

But the straight road stuff did present a saving grace, idiosyncratic to my own biases though it surely is, and it's this:

It dramatizes the most common problem I have with the way the Flash is frequently written, namely the constant thematic emphasis on running. It's a small thing, but when the operative verb is run (rather than the more general move, or something), the implication that he's maybe running away is never far behind. Injustice makes that overt here, and in a way that highlights the moral dilemma at the heart of the story.

Because in this case, Flash is running away. (Or he's running to heaven. You decide.) We may see him confront the truth in a forthcoming issue, but for now he is morally ambiguous. And that's pretty useful in an environment that has become even more polarized (and, thus, for me, more boring) than usual.

Know what I mean?

Art - 4: Yeah, this is good work. I'm partial to the Flash, even if he is treated sometimes as a bit of a doofus. Miller does nice work with the speed force visuals and the facial expressions of Flash and Galaxor in particular. The sequence where the kangaroo "turns into" Galaxor is also powerfully touching and allows you to mourn Injustice's world for a second, despite all those thoughts in your head.

Cover Art - 4: This cover makes me think we're definitely coming up on the climax and conclusion to the series. The faction lines are literally drawn, with Flash literally between them and it's all rather classic, suggestive of finales and other celebrations. Official solicitations would suggest we've still got rather a ways to go, however, so I guess I'll just leave with "nice composition, the guys on the right haven't got a chance."