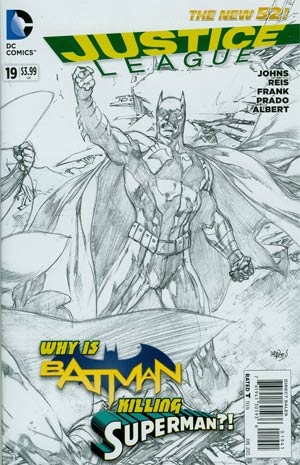 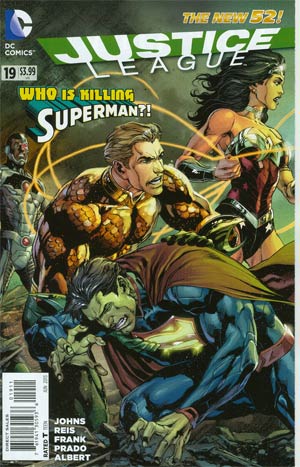 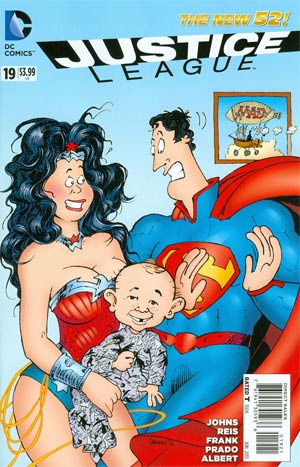 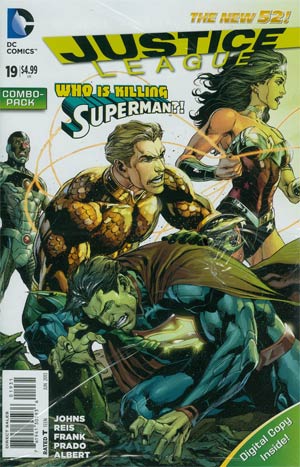 At the Batcave, Jason Todd (the second Robin, who served right after Dick Grayson; and who is currently the Red Hood) speaks with Alfred Pennyworth. Alfred is mourning the recent death of Damian Wayne, the latest Robin and Batman's son. A costumed intruder suddenly arrives. The intruder uses a taser to incapacitate Jason, and then knocks Alfred through some plate glass. The intruder then uses biometrics (computer identification via handprint and retinal scan) to gain access to additional secure chambers in the Batcave. The intruder approaches a series of containers; each one marked with the insignia of one of the superheroes. The intruder opens the box marked for Superman, and removes a piece of Kryptonite.

Rhonda Pineda, the new Atom, appears to be riding on horseback, leading some troops in battle against an army of demons. An alarm goes off on her smartphone; and she decides to leave. We learn that the battle is really a computer simulation that Rhonda is running, probably for training purposes or merely for recreation.

Atom and Firestorm have arrived early for a meeting at the Watchtower where they will be certified for membership into the Justice League. The original members are nowhere in sight. Ronnie Raymond and Jason Rusch (the two persons who unite to form Firestorm) are bickering; but because Ronnie is the dominant half of the Firestorm matrix (and Jason is the suppressed half) it appears to Atom that Firestorm is talking to himself.

In Kahndaq, a Middle Eastern nation, the Kahndaqi military are in a standoff with the terrorist group, the Sons of Adam. That terrorist group is responsible for the recent bombings at the US embassy in South Africa. The US has been denied permission from the Kahndaq government to enter the country and confront the radicals. The Sons of Adam have taken eight hostages; but they now have ten because Superman and Wonder Woman have gone undercover and joined the group. Once confronted, the two heroes unmask and join the fight against the armed terrorists, thus helping to save the hostages.

Back at the Batcave, Batman has arrived and is surveying the damage. Jason is apologizing because he did not hear the intruder come in; so he was not prepared to defend Alfred. Batman is just glad they are both OK. Batman says the Justice League will help find who attacked them.

Cyborg and Aquaman brainstorm with Batman and search for clues to determine who got in, how it was done, and why it was done. They are having no luck so far.

A TV report comes on stating that Superman and Wonder Woman crossed into Kahndaq without permission from the government there. They successfully rescued the hostages; but are now being accused by the local government of spying. By association, the Justice League and the US government are being accused as well.

Batman wants to talk to Superman and Wonder Woman, so Cyborg teleports Batman to them.

Wonder Woman is asking Superman why they don't intervene in the Kahndaq civil war. They could prevent suffering by bringing food, water, and supplies; and by stopping the violence. Superman says he made the decision a long time ago to use his powers to inspire, not interfere. Wonder Woman makes the point that if they did intervene, nobody could stop them. Batman is within earshot, and is not happy with her statement. He says that super-villains talk that way.

Batman is critical of their actions. When Wonder Woman says they had no choice because lives were at stake, Batman suggests they should have come to him and planned a stealth mission instead of revealing themselves publicly. Batman says the Justice League has now been implicated. When Superman says that it was only himself and Wonder Woman acting on their own, Batman replies that when Superman and Wonder Woman act together, they represent the Justice League and have to be mindful of the consequences of their actions.

Batman brings up the fact that Superman and Wonder Woman are in a relationship. Feeling she is being accused of something, Wonder Woman starts to get defensive. Batman says that when the two most powerful beings on Earth form an alliance, many people will be suspicious or fearful, and may act adversely.

Batman reveals that someone broke into the Batcave to get to Superman. Wonder Woman becomes furious, and wants to know what was in the Batcave that can hurt Superman.

Atom and Firestorm are wandering the halls of the Justice League satellite looking for food and bathrooms. They are suddenly attacked by the dangerous Justice League foe known as Despero.

Story - 4: There is much to discuss this issue.

First of all, who is the intruder who broke into the Batcave and stole the Kryptonite? What does he want? I have one theory, but it is far-fetched. Whoever it is, he dresses somewhat like Batman, wears a utility belt, is trained and athletic, knows his way around the Batcave, and can pass the security defenses that have been installed. For me, this all points to a former resident of Wayne Manor: Dick Grayson a.k.a. Nightwing. Recall that Nightwing was in the Watchtower last issue; and I considered him as a suspect in the theft of critical Justice League data. So maybe this is all related. But if it is him, I have trouble believing he would ever take a punch at Alfred. So perhaps Grayson is under mind control by Despero, which would explain everything, including why he stole the Kryptonite.

But that is just a theory, and could be way off base.

For those who have not read my earlier reviews, let me reaffirm that I am a huge fan of the Superman/Wonder Woman alliance. Because they are so similar in power level and world view (relative outsiders; symbols of hope, truth, and compassion; champions of justice) their strong friendship and desire to work together just make perfect sense to me. Yes, their upbringings are radically different. But their many similarities should outweigh their differences, and continue to allow for a strong bond and a working partnership. (My opinion.)

By the way, I thought Batman's criticism of the Superman/Wonder Woman romance was harsh and unfair.

The next topic is one that I have thought about since I first became a fan of Superman comics. If you had the power of Superman (or Wonder Woman), and could pretty much do anything you wanted; with all the strife and tyranny in the world, when would you jump in to "correct things," and when would you hang back. This moral dilemma would face you every day. With all the dangerous and oppressive regimes in the world (I won't list them here; you know which ones they are), when do you take charge? And if you don't jump in, for fear of abusing your power, how would you handle the guilt when genocide happens in the world and you do nothing. And if you *do* choose to intervene, how do you justify it? Where do you draw the line? What is your answer when people accuse you of abusing your power?

I have seen this topic touched on in at least one notable comic book. I am thinking of the oversized classic, "Superman: Peace on Earth" by Alex Ross and Paul Dini. If you have never read that one, you really need to try and get your hands on a copy. Just a magnificent book!

Anyway, in this story, Wonder Woman is implying that they should consider changing things; not just in Kahndaq, but in hot spots around the globe. Superman is making a strong case for declining to intervene, avoiding any possibility of abuse of power. Batman shows up in time to express his opinion; siding with Superman. I found this to be an interesting exchange. Superman's comments show great wisdom. He implies they should always make sure they are not imposing their judgments on the world.

I am looking forward to things heating up next issue as the Justice League faces off against Despero, a very dangerous foe.

Art - 4: The artwork is strong. Everybody is drawn well, from Wonder Woman to Atom to Alfred.

Billy Batson and his siblings continue to attempt to find a way from the subway train to the Rock of Eternity to see the Wizard. Billy hears a supernatural young woman named Francesca, who tells him to say the magic word to find the Rock of Eternity. Francesca continues to speak to Billy, and then appears in an iPad.

Francesca tells Billy that once somebody is given the magic lightning, it cannot be taken back. This means that Black Adam cannot be depowered; only defeated by Billy.

Francesca shows Billy images of the young boy who was given the magic lightning and became Black Adam. Seeing this, Billy draws the mistaken conclusion that Black Adam can be reasoned with. Billy finds Black Adam while he is Billy, not Shazam. Billy tries to talk to Black Adam, and realizes immediately that he has made a grave error. Black Adam covers his mouth so that Billy cannot speak the magic word.

Story - 3: We still have not seen any heroism or good judgment from Billy Batson. He only makes bad choices so far. This time, he has made an especially bad choice.

I continue to enjoy this backup feature; and wonder when Shazam will get his own book.

Cover Art - 4: Superman is crumpled over in pain due to the Kryptonite that Batman is brandishing. This is an effective cover, well drawn. I like the fold-out effect.

Cover Art (Black & White Edition) - 2: This image of Batman does not work at all in black-and-white. The image, without the Superman/Aquaman/Wonder Woman portion on the left, is definitely missing something.

Cover Art (Variant Edition) - 5: This tribute to MAD Magazine had me laughing out loud. Wonder Woman holds their infant son, who is the spitting image of Alfred E. Neuman. Superman looks on in horror. The style is simplified and cartoony. I couldn't stop laughing.