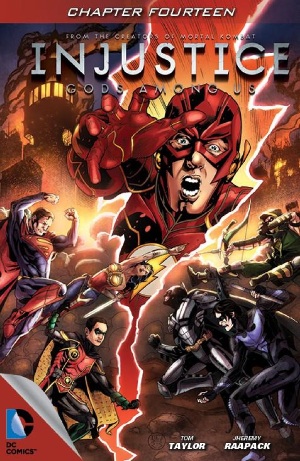 Injustice: Gods Among Us - Chapter #14

"Injustice: Gods Among Us" - Chapter Fourteen

Click to enlarge
Batman says he's abandoned again, that his son is dead. Cut to Two-Face crashing a local Gotham Channel Two news broadcast, featuring twin anchors addressing a nation divided - he couldn't resist. But Superman arrives and vision-melts Two-Face's coin mid-toss, nullifying the situation effortlessly. He then asks the news anchors if they're ok and ends up staying to be interviewed on-air, during which he says he's in Gotham to rid the city of its sickness, that he will no longer allow its villains to "kill and maim and terrorize and then be 'treated.'"

Meanwhile, Batman, Nightwing and Robin are watching from the Batcave and Batman realizes that Superman and his supporters are heading to Arkham Asylum, possibly to kill all of the inmates. Robin doesn't see why they should try and stop them, and Batman gives up arguing about it once the insults start; he and Nightwing simply fly off in the Bat Plane, leaving Robin behind. En route, Nightwing plays a bit of Devil's Advocate for Robin's position, but ultimately he agrees with Batman.

At Arkham, Wonder Woman is explaining to the admitting doctor that they're not there (Superman and Cyborg are with her) to return Two-Face so much as to move all of the inmates to a more secure location. The doctor tries to protest that they don't get to make that decision, and is backed up by Batman, who appears ahead of them with Nightwing.

But Wonder Woman is more impressed than surprised - they're exactly where Robin, who was bringing up the rear, said they'd be... Robin, who figures the two of them, Batman and Nightwing, shouldn't give them any trouble.

Art - 3: Raapack is a bit hit and miss for me, balancing a fine line between appropriately chaotic and merely sloppy. When the story is putting me to sleep, though, this quality doesn't help.