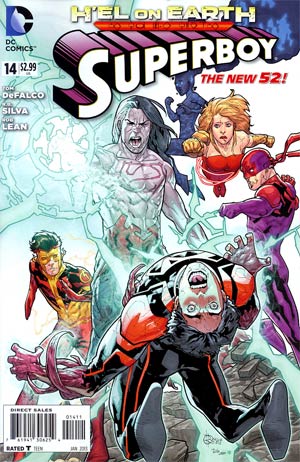 Click to enlarge
Jocelyn Lure is struggling to keep up with a moody Kon-El as they soar through the city. After the events of Legion Lost #14-16 Superboy has finally realized that he is a genetically engineered weapon created by Harvest. He also has a hidden trigger to activate a mindless rage mode of which he has no control over. Kon refuses the help and support of Lure accusing her of being one of the many that has tried to manipulate him.

When Kon arrives back at his apartment he discovers Miguel/Bunker, a fellow Teen Titan, and opens up about the past few days. How he hooked up with The Ravagers and finally felt like he belonged. Lure arrived and with a hidden agenda whisked Kon into battle with Harvest and some time lost Legionnaires.

With Superboy unable to resist Harvest's commands Kon feels like he can't even trust himself anymore. Bunker urges him to put the mess behind him and just hang out in the city for a while. As they do Dallas spies on them from across the hallway. Realizing her tenant is a metahuman Dallas wonders if Superboy is a genuine friend or a spy.

Bunker offers some advice to his pal, return the stolen money, give up the expensive apartment and move into Lex Towers with the other Titans. Superboy points out his original mission was to kill the Titans and as a result they hate him. Bunker shrugs it off as all in the past. As Kon knows his real name, Miguel asks if he can call his friend by a name rather than an identity. Kon tells him his Kryptonian name and just as he's about to translate it, a voice from nowhere yells it out:

"Abomination in the House of El!"

H'el is able to tell straight away that Kon is a clone and wonders how Earth, with its limited technology, could carry out the cloning procedure on a complex Kryptonian. Kon doesn't want a fight or even care who H'el is, requesting to be left alone but H'el wont allow it.

While Kon and H'el confront one another Bunker makes it clear that he can't see H'el and worries that perhaps Harvest has flipped Superboy's 'switch' again.

Somehow H'el is able to pull Kon from the ground and with a burst of energy from his fingertips he smashes the teen into the ground and smashes cars and rubble into the fallen hero. Miguel sees the devastation and using his 'block' power constructs a giant 'T' in the sky in hopes the Titans will see it, which a bored Wonder Girl and Kid Flash do, while discussing Bunker and his idea to add Superboy to they're housemate roster.

Meanwhile, now in the sewers H'el and Superboy duke it out. H'el is clearly far stronger than Kon and proves it with blast after energy blast, but Superboy uses his TTK to hurl debris at his opponent. H'el is unimpressed and uses his own TTK to hurl it back before it hits him. Unfortunately Kon isn't so lucky and is smattered with it.

Superboy lets his anger take over and attempts a fist fight against H'el but is soon snared in a vice grip by the throat, electrocuted by H'el's energy powers. Solstice, Bunker, Kid Flash and Wonder Girl arrive at the crater and hear Kon screaming. They arrive to see a now revealed H'el disassembling Kon's body. H'el is curious to know Kon's genetic make up, he is both human and Kryptonian and at the same time neither. H'el vows to discover the clone's secrets after he rips him apart at an atomic level.

Kon is a screaming mess of flesh, bone and sinew and as the Titans arrive to aid him, he watches as H'el's TTK blast hurls them through the sewer tunnels. H'el realizes that perhaps Kon's unique genetics might aid him in his mysterious plan and while blathering Kon uses his strength to break free with a flying knee to H'el's chin.

H'el continues that if he hadn't arrived, given time, Superboy would have doomed the Earth and its people. But so that Krypton can be brought back from the dead that can't happen. Recovered from their slap aside the Titans race back to the fight, they might not like Kon but they'd willingly help him as he had helped them in the past despite his 'programming'.

H'el decides to spare the Titans and teleports away with a captive Kon, leaving the Titans alone and bewildered.

Story - 3: The story was sparse but where it excelled was Superboy's internal and long overdue turmoil. I find it frustrating that something like a secret killing switch in his head was utilized in a guest appearance elsewhere given that it's a pretty major twist for Superboy but it's only referred to in his own book...

The character drama was nice, however sparse with some clear and relevant dialogue from Dallas and the Titans that help the overarching story move along. Bunker even became likable instead of the stereotypical token he was previously.

H'el is confusing, his powers odd, I say TTK and teleporting in the review but it's unclear if that's even the case. One minute he's invisible, the next not. The fist fight too was unnecessarily drawn out and H'el loves the sound of his own voice, unfortunately I preferred him as the strong silent type.

As the first proper chapter of "H'el on Earth" it's not great. He quietly watched Superman and Supergirl in the Prologue and found Superboy while he was in disguise as a civilian. How? I hope elaboration comes soon...

Art - 2: The art was messy. More specifically the inks, they were so scratchy and excessive in places the art lost its usual charm and made be keep thinking, why overcomplicate it?