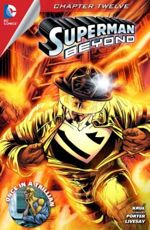 "One in a Trillian"

Click to enlarge
A young Trillian boy learns the truth of a savage attack from a bizarre alien that all but ravaged his planet. The strange alien appears to have been a gnome-like Superman. With the resulting war still being waged, the Trillians aim to seek justice against the alien responsible. A Trillian mission is underway to seek out and apprehend Superman.

Late on Earth, Superman investigates unusual power surges at Metropolis Light & Power. Simply a ploy to lure the Man of Steel, the Trillian missions pounce upon their quarry. The triumvirate of Trillians surprise and confuse Superman, but are unable to contain him. In the scuffle, one of the generators is damaged, forcing Superman to rescue his would-be assassins. Beaten, the task force uses its technology to escape, leaving the Last Son dumfounded about the accusations of his attack upon their home world.

Back at their ship, cloaked in a field outside Metropolis city limits, the Trillians lick their wounds. The leader contacts the one who seems to have given them the goods on Superman's whereabouts. The Trillian embraces his failure and is ensured by his acquaintance that Superman can be taken out. Who else is tough enough to go head-to-head with the Big...er... Black Boy Scout as long as the price is right? That's right! It's fraggin' Lobo!

Story - 4: First things first: massive apologies for the dilatory submission of this review. More importantly, Happy New Year to all us Supe Heads! Peace, prosperity, and happiness for 2013.

And now the review:

This one sailed by. It's a brisk read but it tells so much story and sets up so many questions that its brevity is compensated by its quality. The back story concerning the attack on Trillia, a prosperous planet, is particularly intriguing. Just who is that twitching, gaunt, pestilent, vampire of a Superman? Bizarro? Doesn't look like him. Curious...

Furthermore intriguing is the role of Lobo, the second most awesome tertiary character in the DC Universe. (The first is Kilowog, of course. Ya poozer). It's doubtful rugged ol' Master Frag has anything to do with the events that led to disaster on Trillia, but just how Krul plans to incorporate the Main Man into the entire plot has me very excited for future issues.

A final note concerning the Trillians themselves: they aren't villains. There's a genuine sense of sympathy for them, more so when we consider that they've mistaken Superman for the one who attacked Trillia. All they want is justice for those who died and for the tearing apart of the livelihood they collectively worked to establish and maintain. In chasing Superman, they're being lead astray from obtaining that justice. And that's something Superman definitely wouldn't dig.

Once again we're delivered a compact installment full of slick pacing, digestible dialogue, and believable characterization. Can someone send this to Scott Lobdell? ... I jest! I jest!

Art - 3: Porter hits more right notes this time around. It's still not up to snuff when we look back through his catalogue. We can see a semblance of the great work he did drawing for Grant Morrison, but there's still a lethargy that resonates far too loudly. The backgrounds and the characters plopped in there suffer most. Nonetheless, it's a continued improvement over the lackluster work he was mailing in during the first arc.