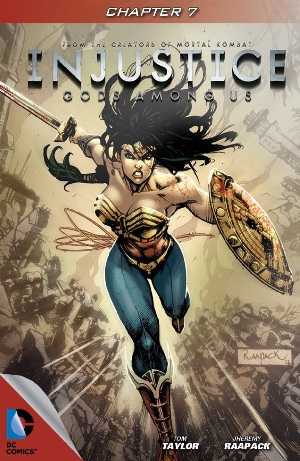 Injustice: Gods Among Us - Chapter #7

"Injustice: Gods Among Us" - Chapter Seven

Click to enlarge
Operators of Drone Command in Nevada prepare to strike a Middle Eastern target but Superman intervenes and destroys the missile in the air. U.S. military officials discuss the situation and conclude that Superman's actions constitute treason and that he must not be allowed to continue. A plan is conceived: abduct Jonathan and Martha Kent. In go "independent contractors" led by Mirror Master, who imprisons the Kents in his mirrorverse before having the farmhouse burned down. Superman arrives while the house is still burning and finds a mirror on the table, in which Mirror Master appears to explain that Superman will never see his parents again but offers assurances they will live as long as Superman stops unilaterally interfering in world affairs.

Story - 3: Near as I can tell, there are three unassailable modes of objection to this book, as follows:

1. Disapproval of the premise - Superman doesn't kill, this isn't Superman, why not use Ultraman, etc.

2. Disgust (to varying degrees) at the raw commercialism of this kind of story being told in an extended advertisement, in some ways forcing us to consider the extent to which specific developments are chosen to serve story or marketing objectives.

3. Disappointment that, structurally, it is hugely in debt to Kingdom Come and The Killing Joke - to the former in terms of the emergence of mixed (traditional hero/villain) factions based around shared alternate understandings of what it means to be "super" (i.e., between "might makes right" and "right makes might"), to the latter in terms of the Joker's motivation to drive Superman insane being the whole thing's driving force.

These objections are unassailable because they come down to personal preference and opinion, to which we are all entitled. In my case, I am not much bothered by (1) and (3), though my views on (1) are easily subject to change if, in the end, what we get was just an "evil" Superman or another Superman vs Batman romp instead of a kind of inverted examination of what "truth, justice and the American Way" really mean(s).

As for (2), well, I can't deny that I would be more interested in (even though possibly less forgiving of) this thing if it was a proper Elseworld or other "imaginary" story. (Standard continuity wouldn't likely work without some kind of deus ex it-was-all-a-dreamica at the end.) And while no one would ever accuse DC Comics of being inexperienced at using the threat of long-term repercussions on the DC Universe for short-term financial gain, to go to the extreme kinds of places that this story has gone just to sell a video game seems to me, well, crass.

(I mean, assuming you differentiate between comic books where the craftsmanship not only comes first but is the value proposition versus those where the craft is secondary to the objective of selling something else. Otherwise, they're all commercial.)

But territory like this in standard continuity would at least force you to consider the consequences (however short-term they may end up being), and thus examine the implications, of fundamental change.

Ironically, however, in the case of Injustice: Gods Among Us, it's precisely because this is a video-game tie-in/extended advertisement that it can exist at all - beyond the obvious of these events not having any impact on standard continuity, it's a third-order bet that literally aggravating our collective awareness of what these "multi-media properties" are like in their primary medium will compel us to pay attention to their subversion here (when they are subverted, anyway - so far, Mirror Master, other than working for the government, seems on point), including spending money for the (in some cases probably perverse) pleasure of seeing just how far they will go. They don't expect the book to be a train wreck but have a built-in means of capitalizing on some additional video game sales even if it is:

There's also the fact that alternatives to Superman like Ultraman simply do not have the "household name" status required to reach an audience bigger than just the comic book readers/collectors.

At the end of the day, I choose not to lose sleep over these market-based realities, as it were. Concerning this story broadly, I have one principal complaint: that while the Joker was acting completely in character back at the outset, Superman - too slow to the scene of Lois's abduction and too rash in response - was not. Everything was made possible in those moments of Superman not being himself before the real complications designed to transform him had even occurred.

In terms of what happens in issue #7, we have logical forward motion flowing directly from Superman having outed himself as Clark Kent last week, which, since Lois is dead, wouldn't have much mattered if Ma and Pa were also dead (the way they are in the New 52, say), but was in fact the first clue that they were very much alive and would appear soon. And here they are, in another classic super-hero nightmare scenario - the assault on the loved ones. If the pattern holds, they'll be dead in a week or two and Superman will be pushed to a new height of dictatorial overreach, where what will mostly be left is to see how the rest of the universe lines up, whether behind or against him.

I know you can't wait.

Art - 5: I liked Raapack's work from the start and only wish he had stuck around throughout.

Cover Art - 3: Sure. Whatever. Good work on Wonder Woman but no immediate relevance to the story. I guess she'll play an important role over the next two weeks while this cover is still in rotation.