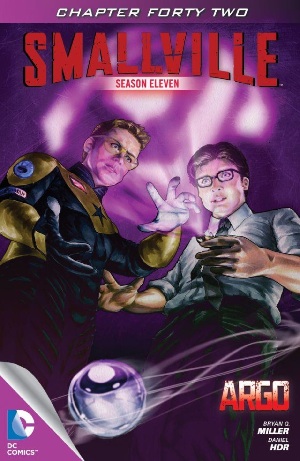 Click to enlarge
A group of men is running across the Antarctic tundra - running from some thing. They are stopped suddenly in their tracks by a hovering robot, who tells the men it can't say what's chasing them but the "Bossman" can handle it. That Bossman turns out to be Booster Gold, who arrives on the scene amidst a flurry of fireworks... to the men's disappointment: they were hoping for Blue Beetle, "the kid with the bug on his back."

Booster, all smiles, asks what the problem is and no one can get an answer out before an abominable snowman kind of creature makes its presence known in the background, closing in. Booster flies to intercept the beast and is startled when his Legion of Super-Heroes ring suddenly recognizes that it is being worn by a non-Legionnaire and shuts down, causing Booster to plummet to the ground. The beast is on him in an instant, picking him up in a crushing grip. And just as Booster thinks he's about to die, calling out to Skeets to "tell the world [his] story," a blue energy beam strikes the beast, which runs off - Blue Beetle has arrived to save the day.

Booster is neither impressed nor all that happy about this turn of events, but what's really made him upset is the failure of the Legion ring. Skeets doesn't know what "Legion Protocol Six" is, but Booster thinks he knows someone who does.

In Metropolis, Clark Kent and Lois Lane are showering together and Lois is exulting in Clark's performance... washing her hair. They revel in their newfound "domestic bliss" and discuss Lois's pending trip to Africa to investigate the "Angel of the Plateau" (see the parallel story, "Valkyrie"). Clark says he feels he should be involved, but Lois insists that he needs to make up for lost time away from his reporter job at the Daily Planet. She's also a little concerned about him being alone after Bart's death (see "Haunted" chapter 11). He says he'll be fine and wonders how many more they'll lose. At that moment, Clark hears a distress signal, finishes putting on his Superman costume, and flies off through the window with a "Love you!" shouted over his shoulder.

Later, at the Daily Planet, Cat Grant is not happy that Clark hasn't returned any of her calls - she's been trying to let him know that Booster Gold has been waiting for him. Clark and Booster head to the roof to talk, Clark annoyed that Booster is finding him at work. Skeets is happy to meet "Mr. Superman" and Booster admits he knows about Clark's "hiatus" but is eager to discuss the Legion ring. He tosses it to Clark, whereupon its "voice" is heard again, declaring "Authorized user present. Prepare for mandatory recall." There is a lot of purple light, neither Clark nor Booster knows what's happening and then, with a "Pop," they are brought forward in time to the 31st Century, leaving Skeets behind and finding themselves standing before a giant - and toppled - statue of Superman.

Story - 5: You know what? Great issue! No unnecessary exposition, good characterization (including requisite irreverent humor) on Booster (much of it via Skeets, which I dig), I even enjoyed the shower scene - largely because, unlike the last time we saw these two in this kind of situation it was poorly timed: here, it makes perfect sense. Yes, the hair washing gag is a bit groan-worthy, but I'll take it over critical developments happening "off camera" or nonsensical and unsatisfactorily explained Batman assault greetings any day of the week.

There really isn't anything else that needs saying: good, fun, engaging, leaving me wanting to know what's coming next. Nice.

Art - 4: New pencils but no obvious fall off in quality. That's refreshing. Not saying this work is the best the title has seen, but it's very good. Booster's character is captured best of all, in both facial expression and overall posture. I'm glad this character is back - he's always fun.

Cover Art - 4: Pretty much classic, not really a spoiler (always a plus in my book) and not a bad job of Tom Welling's likeness (if less so Eric Martsolf's), even if I am seeing a bit of Cillian Murphy in him.