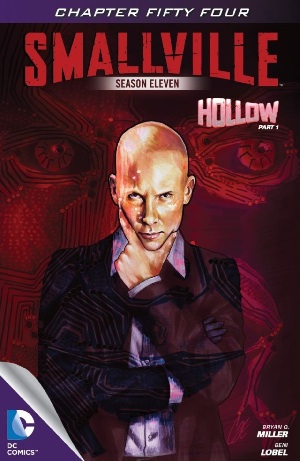 Click to enlarge
Waking up from "standby mode," the newly digitized Tess Mercer immediately is met by Dr. Emil Hamilton who begins to ask her a series of questions, including if she dreams. Tess pulls up some memories of her life before her "death" and some of Lex's memories as well. Being interrupted by Watchtower's Seattle team of Black Canary and Speedy, Tess moves her attention from Hamilton to them to help them with their predicament.

Once the heroes have their situation under control, Hamilton resumes the conversation by presenting Tess with some upgrades, including one to make her look more human, to which Tess believes she is no longer.

At LexCorp, Otis wakes Lex up from his own sleep to show him some new information the R&D department learned from the failed Guardian Platform launch. Otis shows Lex that a spaceship, which is actually Earth-2 Chloe's Queen Industries ship, crash landed during the launch. Lex orders Otis to get him a meeting with the R&D department as he rushes out the door.

Back at Watchtower, Tess is having a conversation with Superman about some place that he's scoping out. However, Clark has to leave as a situation develops on both ends of the line. Tess sees Lex and Otis walking out of LexCorp Plaza as she stops the revolving door on Otis, only letting Lex out. Lex is immediately met by ex-LexCorp employees who are upset about their termination and decide to beat him up. Watchtower's computer asks Tess if she wants to dial 911 for help, to which she replies, "no".

Story - 4: I actually really enjoyed this chapter of Smallville. One of the challenges with me, personally, and this book, is that it doesn't always feel like Smallville. That is to be expected, and is fine, however, because Smallville was the journey of Clark Kent becoming Superman and of the other elements of the Superman mythos being put-together in this universe. That's why I was totally fine with how "Detective" and "Argo" went, because they are more-so Superman stories than Smallville stories, but they did have a nice Smallville feel for the most part. "Hollow" is starting out to be a more "Smallville-like" story right off the bat, just like "Valkyrie" was, just based off of how Tess, Lex, Emil, and even Dinah Lance and Mia Dearden were handled.

Going off of that comment, the one big issue I have had with the Smallville: Season 11 comic from the second (digital) issue until now is CorTessa aka Tess Mercer. Do not get me wrong here, I LOVED the character on the show and I really like where they went with her in the "Finale" as she sacrificed herself to save Clark and allow Superman to exist, I really liked that. BUT I do not like her still being "alive" in Season 11, either as a memory or as an AI. Maybe this is just me, I know it's not, but I feel that Tess' arc on the show was completed at the end of the series, and I never needed to see her again. Quite honestly, I'm not a fan of how it was explained in the book either. I mean, I would have been cool with Tess being a ghost haunting Lex (a ghost that was not actually her by the way) like his mother did to him in the Season Five episode "Lexmas," but that's sadly not where the story went. My main fear for this comic is that it's going to try and dive too far deep into the supporting cast and not focus on the main character here, which is Clark Kent. Now, for the Specials, I'm totally fine with other supporting or guest cast members getting some highlights. I absolutely LOVED "Effigy" where Batman teamed up with Martian Manhunter, but I hope that the main episodes like "Guardian", "Detective", "Haunted", "Argo", and now "Olympus" will stay on track with Clark's story, as we waited ten years for this.

But aside from my dislike of Tess' current situation in this book, I really did like this chapter. I liked her dialogue with Emil and I'm happy that he's at least still involved with her and the not-yet-Justice League showing that S.T.A.R. Labs doesn't take ALL of his time. Also, that upgraded look that Emil showed Tess, I'm about 100% positive that she's going to take it by the end of this arc, and if it makes her look less like she's from a Halo game or TRON, then I'm happy to see it.

Another thing I really liked in this chapter was that both Dinah Lance aka Black Canary (last seen in Season 10's "Collateral") and Mia Dearden aka Speedy (last seen in Season 9's "Disciple") returned, and I loved Speedy's costume, that got me excited. It was also nice of BQM to make them be based in Seattle, as that is (in the Post-Crisis comics) where Green Arrow and Black Canary were actually based for a while in Mike Grell's Green Arrow run and is also where Green Arrow is currently based in the New 52 continuity. Love me some DC Universe Easter Eggs!

I did also like the Lex Luthor stuff in this issue, but is it just me or is Otis waaaay too involved in Lex's personal life? It's actually border-line stalker status, just a little bit. Now, I always enjoy the way that BQM writes Lex in Season 11. For a guy who never got the chance to write the character for television, he can sure make it seem like we're watching TV! Props to Bryan on that one.

Overall, this was a good chapter of Smallville and I'm interested to see where this story goes. I'm also interested to see if Tess may be leaving soon, as her not saving Lex (even when Clark has done many times both on the show and here in the comic series) is going to be unacceptable to the Man of Steel. I'm also anxious to hear Clark's side of their conversation in a week or two when "Olympus" starts...

Art - 4: Solid art this week. I like how Mr. Lobel draws Lex. He draws him a lot like Michael Rosenbaum and that's exactly how he should be. I also liked his take on Tess and Otis as I thought he did a nice job with them. Plus, who doesn't like Black Canary and Speedy in their uniforms? I mean, come on!

Cover Art - 5: I've said it before and I will say it again, I love Cat Staggs' artwork on this book. It's fantastic. I generally never have any problems with it and this image of Lex was stunning. Great work!