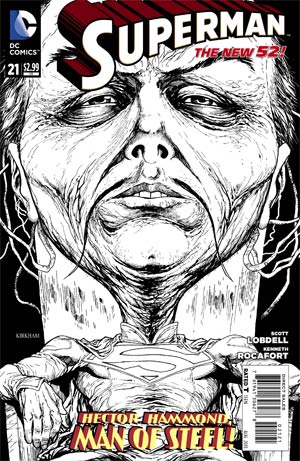 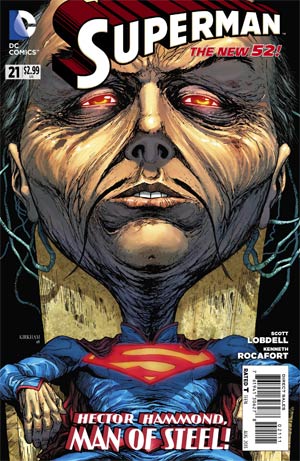 Click to enlarge
The Holistic Integration for Viral Equality aka H.I.V.E is abuzz. The Queen bathing in Techno-Plasmic waste (slime made from negative emotions of everyone in Metropolis - Ghostbusters II anyone?) and her attention has been drawn to Hector Hammond after the events of the past few days. With the level of power he has, and stuck in a coma no less, H.I.V.E would have the ultimate tool to accomplish their goal... that is, to save the world... from itself.

In moments the Queen's orders are carried out. S.T.A.R is infiltrated by a kind of psychic virus and seeks out Project: Mindstorm. The team are only just recovering from the attack by Orion (Superman #19/20). The scientists chat amongst themselves when one admits that until they find the meteorite that supercharged Hammond they are at a loss. After that tidbit of information the virus takes hold and begins infecting all the Mindstorm staff.

Over in Gotham City, Chinatown, blogger, Clark Kent enjoys a steaming bowl of noodles while waiting on a source that is being very slow at revealing themselves. Just as Clark is about to give up a gun cocks at the back of his head. A man in a strange hooded soldier type garb appears and asks him what he knows of 'The Twenty'. The title is familiar to Clark but he is unimpressed at having to come to Gotham to follow an urban myth. He uses his X-Ray vision to scan his source and is surprised to find a young Chinese woman masquerading underneath.

The source hands over a grubby and stuffed folder for the blogger to read through and Clark is surprised to see a photo of Senator Hume slide out. Hume was one of the most vocal against Superman and his Fortress secrets. The source points out that Hume is one of many identities Hume has and that a vendetta against Superman is the least of his catalog of crimes.

Back in Metropolis, S.T.A.R realize that Mindstorm is being stolen by their own staff and sound the alarms. A flight transport begins powering up to leave the facility and the remaining staff decide Mindstorm is better off dead if he is out of their control and proceed to destroy the ship. The security team are unaware that Mindstorm and the infected staff had slipped into the sewers with the transport as their decoy. The Queen appears as a psychic message demanding the delivery of her prize and the infected reply that her will be done in just 12 minutes.

Clark is on a flight back to Metropolis pouring over the research from the source. His thoughts flow to his own life and how he needs Clark Kent as part of his life, now and forever, if nothing else so he doesn't lose himself to his powers and abilities. Luthor and Hume may have a hatred for him, but Clark is just as much human as they are.

In the sewers, in the hurry to return with Hammond, the entire group neglects to see a loose live wire as it drops silently into the water, Mindstorm is activated and Hammond connects with everyone in Metropolis just for a few seconds. Even in the sky, Clark and all the passengers feel the mental jolt. Realizing everyone but him is suddenly very disorientated Clark races out of the plane at superspeed and dons his armor.

Immediately he is drawn to Lois. Miss Lane races into traffic and feeling a sense of invulnerability waits for a speeding bus to hit her. Superman rescues Lois and questions her about why she would do something so reckless. It leads to a dead end and Superman suddenly gets the urge to seek out Jimmy Olsen. Jimmy is overwhelmed with a feeling of loneliness. His parents have recently died leaving him a billion dollars.

After consulting the poor guy Superman is drawn this time to Perry White where his former boss rips in about to open his shirt. Clark isn't stupid and realizes the rebounding mental attack has been seeking out the sources in the area.

In H.I.V.E the Queen grows deeply impatient waiting for Mindstorm and despite their lateness Hammond appears. He isn't in a coma nor in the Queen's service, instead Hector demands the answer to his questions...

Story - 4: Agggh! This is the big bad? Forgive me but over in Superboy, H.I.V.E has been pushed as one of the deadliest organizations in the DCU. Imagine my disappointment that what we are actually get it a boring rehash of Insect Queen/Queen Bee with a psychic twist. That aside the rest of the issue was pretty good. The scenes with Clark in Gotham and the exchanges with the Source grow threads that have been dormant until now which go a long way towards expanding the Superman story and his corner of the DCU. I'd overlooked the Olsen family death so it being looked into further and the revelation Jimmy is a billionaire was great. I wonder if this is where his 'Beyond' depiction grows from? The Lois and Perry scenes also served us with an insight into Clark and the lengths they are taking to keep Clark Kent alive. After this issue I view it as a filler before the Mindstorm crossover, as opposed to a proper continuation from the story with Orion. I do think however it works as part of the expanding story.

A growing pattern I can see with the recent issues are that as single individual issues they run very weak and seemingly hit and miss. However as part of a larger tapestry they begin to form a well crafted long form.

Art - 4: The only scene I couldn't fathom was the Chinatown restaurant scene when the green clad hooded soldier toting a gun and robotic voice synthesizer popped by to see Clark and nobody freaked out about the over the top garb. Then again it IS Gotham! Elsewhere the art is growing to fit in with the same feel as I mention growing in the writing. I hope Rocafort stays on the title.

Cover Art - 2: Hammond looks as odd and creepy as ever in the book, but on the cover, as the primary 'advert' to sell the comic, it just doesn't fit. It's not a bad drawing, in fact it's very detailed and thought out, but as a reason to pick up the book, I find his ugly mug a tad off-putting.