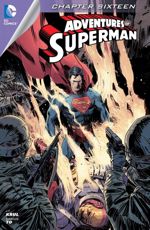 Click to enlarge
In the upper atmosphere of Earth, Superman battles alien ships whose intentions seem to be to attack the planet. Not on Superman's watch. After tossing the would-be invaders out into space, Superman travels to the Fortress of Solitude and consults the AI hologram of his biological father, Jor-El. Jor-El tries to convince his son, yet again, that he needn't be a savior to the humans. Jor-El sent his son to Earth to be protected, not to be a protector.

Elsewhere in space, the pilots of the thwarted ship return to the warmonger they work for - Mongul! It looks like the pilots were on a reconnaissance mission of sorts. Troubles a-brewin'.

Superman contemplates his father's words. He believes he can be of help to humanity and sees no harm in lending a hand when people need it. Perhaps Jor-El is wrong to be suggesting Kal-El not make use of his powers. Just then, a strange new AI hologram appears in the Fortress. The figure appears to have some dark secrets about Jor-El, and he's keen on sharing those skeletons with Kal-El. It's not surprising considering this new AI is none other than General Zod!

Story - 3: This issue seems to be a hefty set-up for the events of the next two issues. If that's the case, and Krul does a good job on the follow up, then I may retroactively up this issue's score. For now, it feels like the waiter brought out my order, and while the dish looks pretty scrumptious, a real opinion will have to be reserved until I take a bite.

There is a lot of homage going on here, and it's all for Superman: The Movie. The Fortress, the crystals, and Jor-El are all lifted from that film. The only glaring difference is Jor-El's attitude toward Kal-El's powers and the use of them. Instead of Jor-El sending his only son to light the way for humanity, he prefers his son to not get so involved, insisting Earth was to be a place where Kal would be protected rather than a place for Kal to protect. Considering that Zod has some dirt on Jor-El, we'll see if that ties into the latter's demand for Kal to remain neutral.

Mongul. Who can hate Mongul? While he isn't my favorite villain (that would be Lord Darkseid), he has been a central component of some of my favorite comic stories, including my top pick for greatest Superman tale, "For the Man Who Has Everything." If Krul can write Mongul half as well as Alan Moore did, then we're in for an awesome treat.

Art - 4: The art is mostly great, nicely rendered, slick and well placed. I like Marcus To but he draws certain characters in a way that doesn't agree with me. His Superman is one of those characters. I can't quite put my finger on it, but like his pencils on the Flash, I don't entirely like how he draws heroes. His villains look great, though, and his Mongul here is top shelf.