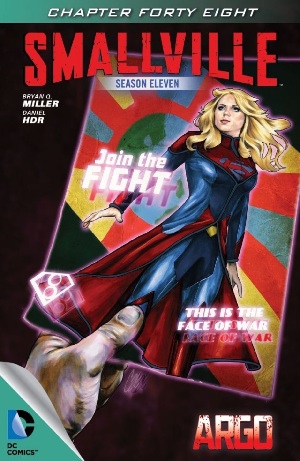 Click to enlarge
Booster Gold wants his flight ring repaired. He reckons he isn't quite the same without it, less worthy. And Brainiac is only too happy to mock him for it - for having stolen the ring to begin with and for being less than heroic without it.

On New Krypton, Superman - the "Liberator" - is getting a history lesson from Chancellor Pa-Vel, where he learns that these Argo-Kryptonians do not worship Rao the way that the Kryptonians that appeared on Earth had. They worship a god that Superman himself once knew.

Meanwhile, a discussion between Saturn Girl and Brainiac on peacekeeping status leads to the suggestion that they might eventually need to activate Legion Protocol Six, recalling Legionnaires from all corners of space and time - the same Protocol that brought Booster and Clark to the 31st Century.

Cosmic Boy reveals to Supergirl that he and Saturn Girl have become amorous, but Rokk is more interested in what Supergirl has to say about her time infiltrating EarthGov. Just then, Superman appears and says he knows what's going on. New Krypton is searching for a burial site.

The tomb of Faora.

Story - 3: I'm just glad they weren't looking for Lana's body, ok? What with it having been Saturn Girl who told Lana she would be known for more than her relationship with Clark. That would have been wretched. Faora makes sense (apart from the "god" business to begin with), though I'm just going to admit that that's about the only thing about this issue, other I suppose than the scene with Brainiac and Booster, that made sense to me. None of the "history" talk about the origins of New Krypton computed in my head - what that green light and "Flamebird" were supposed to be; why this supposedly "proud, enlightened people" refers to the actual remains of one of their own as their "god" - I can only surmise that maybe her child lived, despite all previous evidence to the contrary; why on TV (I think) I would have heard rather dramatic music at the concluding reveal that the "god" is Faora (though, because it happened in my head, the music was bells and chimes and summer birds singing: Thank Faora it wasn't Lana!). There was also the return of Legion Protocol Six and, with it, possibly, a paradox, which is cool and all but I've got no idea where, if anywhere, it's going. (Most likely it both came and went right now and then.)

So because this is a middle act, set-up-the-main-conflict kind of chapter, I'm going to be gracious, give the thing a correspondingly middle-of-the-road 3 (.5 if I could), and agree for the time being to wait a bit and see.

Art - 3: Equally middle-of-the-road, with no particular lows or highs. All around competent work to be sure, but not especially memorable, either.