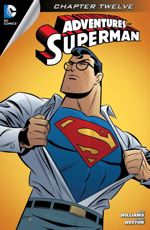 Clark came home today. It wasn't a long visit, as usual. He stopped long enough to fix the clothes line. I was hoping he'd stay for supper, but of course he couldn't. He had to rush off somewhere to save someone or give some nasty invader a little lesson in manners. I worry about him almost as much as I wish he could stay. I know he can't though, and it never fails - I fix his supper anyway.

He has important work to do, and I know that. Still, it's hard sharing the entire world - even the galaxy, at times - with your son. There's just too much trouble going on that needs his attention. Although it makes me a little sad to see him rush off the way he does, I'm very proud of my boy. I know Jonathan would be, too. Why, just today he found Sally Berkoff, the little girl that's been missing. Who wouldn't be proud of something like that? I can only imagine how Clark's heart melted with joy when he took that poor little thing back to her parents. It turns out he saved Ms. Lane, too. She's a troublemaker, that one, but she and Clark seem to make a good team. It seems Ms. Lane had found the little girl first, got herself in a spot with the filthy kidnappers, and hollered her throat sore until Clark swooped in.

Yes, I worry about my boy. It's not the bullets or bombs that have me fussing, though. It's not even so much the strange monsters and other odd slimy things he tends to attract. No, what worries me most about Clark is he never stays. He never rests for a moment with those who make him happy. I'm sad for him about that. He wishes so deeply to be able to save everyone, but even with his powers, those amazing abilities of his, he can't save everyone. That haunts Clark. It breaks his heart. And my heart breaks right along with his.

Now and again, I step outside of the house at night and just look at the big wide blanket of stars tossed across the world. We can see comets pretty well out here, and when one shoots across the sky I think of my boy, and of his heritage - both of them. I always make a wish on those shooting stars, and sometimes, now and again, the wishes come true. And when that happens, it's always a good thing I prepared his supper anyway.

Story - 4: I have an honest question: who wouldn't like this story? Okay, I know there are plenty of people who wouldn't, but I'm sticking with the question anyway. The entire story, minus a couple minuscule cracks, is freshly heated porcelain. Yes, I thought of my mother while reading it. And no I didn't cry...

Anyway, like I mentioned before I usually like it when Superman stories are told from the perspective of the supporting cast. Last issue's calmly manic tale of the slick madness of Lex Luthor was brilliantly monstrous. This time we get the deep sincerity of Ma Kent, a gentle elderly widow who has to share her only child with everyone. What makes this portrayal so heartwarming is that she shares her little boy, Superman, with grace. This could be among the best portrayals of Martha Kent in the history of Superman comic books. Simple, endearing, strong, wise, and humble, all within twenty digital pages.

I make it no secret that I sit in the camp that supports one of the Kent's being dead. I won't blather on about it here since I've spoken at length about it on the Homepage before, but there's an added pathos to Superman when at least one of his adopted parents is dead. Jerry Siegel recognized that when he created the first stories seventy-five years ago. I'm not opposed to both being dead, as it is in current continuity, but this story clearly shows how significant one parent being alive can be as long as the character is written well. I don't like the idea of Clark going home all the time for some good ol' country advice from Pa and some mighty fine apple pie from Ma. That doesn't mesh with how I see Clark. This story, though, displays beautifully how I would imagine Clark's relationship with his parent(s) would be. He'd drop in as often as he could, fix things around the farm, but he wouldn't be able to stay long. The times that he could stay, though, would be far more endearing. I don't know about you, but my mother's walnut cake tastes a whole lot better when I know I'm going to have to miss it.

The rest of the cast is pretty well showcased, save Perry White. I like a hard-nosed Perry, but does he have to yell everything? Chief's portrayal here is over the top. Brainiac's dialogue felt a little stale, as well. Lois, on the other hand, is captured picture-perfect. Telling an armed kidnapper to "stick it his ear" when you're treading sludge in a lead-lined tube and being (albeit failingly) heroic at the same time has Lois Lane written all over it.

There is one thing that had me a little head-scratchy. After Superman defeats Brainiac, he puts the supervillain on a comet heading away from the solar system. Now, why would Superman do that? With the hubbub about Superman killing Zod in Man of Steel still pretty loud across the internet, I wonder what the opponents of that think of Superman's actions with Brainiac here. I'm not stating a case either way, but isn't it a little irresponsible of Superman to just release Brainiac back into the galaxy away from our solar system but surely toward another? Brainiac does have level 11 intelligence, he's bound to find a way to get back on his conquest of knowledge and destruction of worlds. Superman didn't have to kill him, but isn't it just as bad to simply let Brainiac go? Where's the justice in that?

And one last thing: yeah, it is a giant, bald robot. Why would Lex do that? What a nutcase.

Art - 4: I really dig what Weston has done here. He's done what a few artists have been doing recently and that's imbuing the art with a mix of old and contemporary. I particularly like how Smallville is the representative of the old and Metropolis, the new. Superman himself looks great, with obvious nods to the later work of Curt Swan.