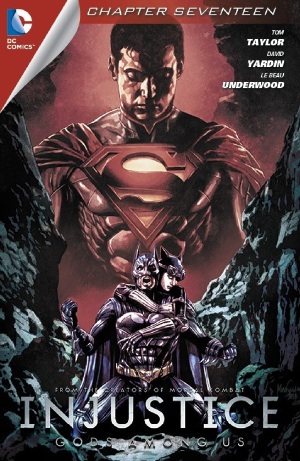 Injustice: Gods Among Us - Chapter #17

"Injustice: Gods Among Us" - Chapter Seventeen

Click to enlarge
Catwoman is on the prowl. She comes across a petty crook, Joey Guiton, dead, in an alley, and reflects on the fact that there are more of these guys around these days. But they're nothing next to the "manicured and suited criminals who ruined them." Joey may have stolen bags and purses, but he'd always leave the credit cards. He had a code. Small-time criminals like this have always lived in fear, Catwoman reckons, but it's gotten worse now that Superman has changed. Since Joker's death, more criminals are turning up dead every night. And Catwoman blames Superman.

She breaks into the penthouse apartment of a man who "takes houses away from people." This, she says, is "the true face of evil." She empties the safe but has failed to notice that Superman has appeared. He startles her, and then they are both startled when the man who owns the penthouse turns up, gun in hand. Catwoman dives out of the window, thinking to escape them both, but Superman is fast. He flies down and catches her mid-fall but is suddenly weak. Catwoman wears Kryptonite earrings.

Escaping this time down into the sewer, Catwoman thinks she may have gotten away until a searing pain in her ear compels her to stop in order to pull out the earring and toss it into the sewage. Heat vision will do that. Superman says he just wants to talk. He breaks the news about Nightwing's death and asks her to be there to console Bruce, that it's too late now for his friendship to have any effect. Catwoman scoffs at this, calls them "idiotic, stubborn, scared little boys" and says she will go to him but demands that Superman save some of his wrath for the corporations and banks.

It's dark at Wayne Manor, and locked, and no one is answering the door. But that doesn't keep Selena Kyle out. She finds Alfred in a chair, red-eyed and booze-gripped, and reassures him that he needn't fix any tea - she's going to be looking after him for a change. Down in the cave, Batman is bloodying his fists against a punching pad, vacantly trying to empty his grief.

"You can fall apart," Selena tells him, taking off his mask. "I'll hold you together."

Story - 4: Something funny happened on the way out of this issue... I got teary-eyed. Seriously. In spite of itself, in spite of Catwoman's all-too-topical insistence that the real evildoers in a world are corporations and banks, in spite of a Superman who doesn't seem to have any idea what his remorse might signify, I still teared up big time as Batman punched out his anguish and Selena Kyle was there to catch him as he fell.

Big time. So that's something.

Because this was otherwise a pretty clunky and sanctimonious bit of social commentary. Catwoman says to Superman, "Punish all the supervillains and governments you want but save some wrath for the evil people who truly rule the world." Really? This world, one of superpowers and magic and all the rest of wonderful comic book fare (like a Joker who successfully nukes Metropolis in a two-step plan that first requires Lois Lane's heart to stop beating), is actually run by bankers? Just like a lot of people think our real world is? Please. And what about Bruce Wayne and Oliver Queen? Aren't they supposed to be a part of that high-finance set? But they're pretty good guys, right? Maybe it's gotten a little hard to tell.

And that's my beef here. In an alternate dimension tale that has so far basically hidden the fact that not only is this happening in an alternate dimension, it's an alternate dimension that the DC Universe we otherwise know is able to access (the game apparently makes this very clear, as in "Ooh, cake! Can I eat it, too?!"), we have a situation where allegiances have become murky, where the line between right and wrong has been dotted or blurred but where finance professionals and the über-wealthy as a group - capitalists, really - are still clearly scum. Does anyone doubt that Catwoman's voice here is the voice of the "narrator," dare I say of the author, given that she makes the point at least three times? It easily stands as the very theme of this chapter. I don't have any special love for bankers, but this a kind of "relevance" that I could easily do without (and not simply because of the perverse irony of this story being told in an extended advertisement for a separate product in a separate medium. Boo, capitalism!)

Art - 4: Great work on the art, though. Loses a little oomph at distance (Selena crossing the threshold of Wayne Manor, for instance), but the close-ups are terrific.