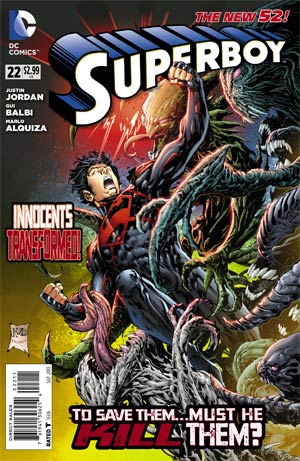 "HIGH SCHOOL and Other Assorted Horrors"

Click to enlarge
Jocelyn Lure attempts to break into Superboy's apartment. Before her very eyes the door handle fades out of existence, further proving her theory that Superboy is somehow altering time with his very existence. Lure kicks down the door but is surprised to find the apartment covered in dust sheets and ponders where he might have vanished to.

For some reason, after encountering the H.I.V.E agent previously, Dr. Psycho is confident that another might be hiding out in McDuffie High School. Superboy watched as a student from the school is carted off to hospital muttering about visions. Psycho notes that six student had also suffered this exact type of paranoid episode, it might be drugs but something about the symptoms and pattern remind Psycho of techniques in H.I.V.E.

Superboy immediately integrates with prompting and telepathic goading. He meets a young girl named Coop and Mr. Levine the guidance counsellor who reveals that the new student will be called Conner Kent. Superboy seemingly lost of all his years of training comments that High School is nowhere near as scary as he thought.

Coop it turns out was deliberately flirting so her boyfriend would be jealous. When he turns violent Psycho reminds him to retain his cover leaving Conner to take a punch to the face and smashing into the lockers. Conner can't resist using his TTK to secretly rip down the bullies trousers and mockingly reveal his polkadot emblazoned boxers. In doing so Conner automatically makes himself unpopular with the in crowd.

This in turn makes the indies take notice and a young girl named Eliza befriends him. The weirder his backstory (which is his actually quite honest) the more Eliza gets on with him but as they mingle with other students Conner is stunned to learn he can see past the cloaking of some students and that monsters are at the school.

Superboy can't do the secret identity thing and during a class he corrects the tutor and embarrasses him by offering up the correct explanation. This in turn now turns his tutor against him and Conner has to see the guidance counsellor... who after hitting a brick wall passes him onto... the principal who after hearing his attitude... passes him onto the superintendent... who sends him back to class!

During another class with Eliza, the class is startled to hear the bully from earlier losing his mind and scream at students to stay away from him. So when the bully, named Hunter, grabs and almost kills Mr. Levine, Connor leaps into action and slams Hunter into the lockers so hard he becomes a whimpering mess before falling into an almost catatonic state. Connor might have succeeded but he did so before the entire school who now think him to be a major freak.

Psycho appears and Superboy reveals he has somehow developed the ability to see his psi powered friend. Psycho is curious to that effect and speculates that these attacks are definitely psi in nature and all roads right now lead to H.I.V.E.

Connor admits to himself that he isn't much of a detective but his only lead or one that would speak to him is Eliza and so he tries to rebuild bridges with her. He is suspicious that the popular students in McDuffie High are the ones falling victim to these strange attacks. Eliza it seems is not broken up at all, in fact she acts like they deserve it for turning the other students into freaks and outcasts.

Superboy pushes the issue more and more until Eliza and the unpopular students decide to reveal the truth... They are all monsters! They try to attack but Connor uses his TTK to push them back only for a psionically deformed Krypto to leap in and attack him. And Psycho to apologize that he is helping Eliza too.

How can he defend against a threat like his friends?

Story - 1: The ingredients for a great story are all here but, wow, the inconsistencies are glaring and serve to ruin it, it's just a mess all round. Superboy WENT to high school it was virtual reality with Rose Wilson but he did actually attend so for him to act like he does with deliberate comedic effect doesn't fit. I was thrown by Psychos initial choice of stalking high schools but in the later dialogue it began to make sense though tenuously. Next which girl actually IS Coop? If it IS the girl in the blazer, WHY did Hunter manhandle the redhead cheerleader?

Next we have the out of the blue naming of Connor Kent. I made up the bit in the review about a psionic push as it was the only thing I could think of... Next orphaned Connor has been in school for at least three days but HOW exactly, even with psi push to mask his arrival, a paper or digital trail had to exist for him to be enrolled but none of it is ever explained.

Then Superboy gains psionic plane vision... At least it is vaguely referenced as an oddity in story but maybe the team were watching too many episodes of Grimm? I like the nod to Dwayne McDuffie by naming the school after him so I'll award a point.

Art - 1: Is Mr. Levine the same age as his students? Which girl is which? Is Hunter an old man or a teenager? Why is the art a messy mass of globby inks and scribbles? Why, if Connor is trying to prevent people from discovering he is Superboy, is he drawn WEARING a tee with the El family shield every day at school? So many questions.

Cover Art - 4: Aside from Connor being impossibly muscular... this cover was pretty slick. The monsters look far cooler here than inside and Superboy looks like he's genuinely facing a major threat. The composition is only detracted by the invading text obscuring the action.