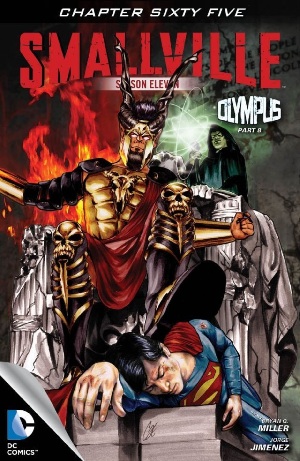 Click to enlarge
In a parking garage, Lois complains to her father about the D.E.O. arresting Diana, names her "Wonder Woman" and gives Steve Trevor grief for trying to appear as though he was defending a woman who can "take down" a tank. Meanwhile, D.E.O.'s underwater headquarters are under attack from Faust, the sea monster and armed SCUBA divers. Bones recognizes that Faust manipulated him and rushes off to face him while at least one celestial specialist takes a bullet, further contributing to a weakening of the D.E.O.'s defensive magicks, allowing Diana to break free of her restraints. Bones and Clark confront Faust, who is able to both keep Clark at bay and kill Bones before taking the jewel from the trapped Hippolyta's tiara and summoning Hades, who promptly remarks on the beauty of the stars. Diana then punches Faust in the jaw and Clark tries to slow him (or something) with heat vision but Faust escapes in a swirl of mystic energy. As the sea monster closes in for the kill, Clark asks Diana to decide quickly whether she's going to help him as Superman flies (and/or swims) up, up and (using his heat vision again) through the sea monster on his way "topside" to confront Hades.

Story - 4: So much for the scary sea monster. Superman FTW! Kinda harsh, though, too, no?

This issue was ok. I'm trying to think of something to say about how the classic damsel in distress narrative is sort of being flipped on its ear here, what with the main quester in search of the imperiled damsel also being a woman. Except technically Clark finds Hippolyta, meaning that ultimately Diana didn't (not couldn't: don't be like that) actually complete the rescue herself. And she, too, is captured, after having willingly submitted to the bondage. (Classic, or what?) So I guess that's all I really have to say about that.

Having Lois be the one to name Diana "Wonder Woman," meanwhile, seems to me like almost a cliché, a bone tossed to a character who is supposed to be pivotal but who has mostly just been pivoting from one scene after the other in which almost everybody but her is more integral. She's in character, certainly, but just sort of there and not really having any impact on events.

Farewell to Bones, though I doubt he will stay dead and hope he doesn't. (We actually don't know for sure that Bones is dead, but that does seem to be the impression with which we're supposed to be left, with that panel in which he's shot all in red to convey the sheer bloodiness of Faust's magical attack.)

All things considered, some pretty significant forces - probably the most dangerous yet other than Darkseid - are being lined up against Clark and company, and I admit I'm intensely curious to see how Miller draws this one to a close. Despite my repeated acknowledgments that I haven't found this storyline to be particularly interesting, I also want to be clear that the arc has been well executed (except, of course, for knuckle-cracking hacker Martha).

Art - 5: We're all agreed that Clark/Superman no longer looks anything like Tom Welling, right? I mean, just look at that chin Jimenez has put on him! That's fine by me, as long as the art is consistent. But I'd like to hear from you about what you think. Do you want to see a return to cast likenesses when the book's format changes? Meanwhile, shades of Star Wars: A New Hope in the corridor gun battle, and everything else is just strong, solid work.