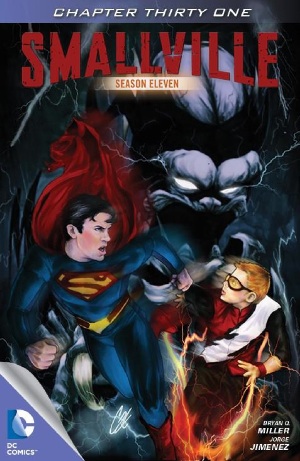 Click to enlarge
Lois Lane, eating take-out with Superman on the Daily Planet rooftop, informs him about the Lexcorp employee who was aged to death by the speed force and that similar incidents have occurred all around the world in places, Superman deduces, where Bart has been. He needs to talk with an expert. Lois's intern then arrives, scaring Superman away, and reveals that handwriting consultants have determined that the "Help" note Lex Luthor wrote and passed to Lois in his office was written by Tess Mercer.

Over at S.T.A.R. Labs, Oliver Queen and Emil Hamilton prepare to attempt one of Lex's "mind dives," using Chloe and the corpse of Chloe-2. The idea is that they're going to see whether Chloe can access any of her counterpart's memories in their efforts to come to terms with what the "Crisis" is.

Superman and Impulse, meanwhile, go to the Justice Society of America headquarters/museum, currently under the care of Ma Hunkle, to begin a search for Jay Garrick, the original Flash.

Back at S.T.A.R. Labs, the mind dive works and Chloe is witness to deceased Chloe-2's startling memory of seeing Lois-2 disintegrated by the laser from an alien spaceship hovering about the city.

Story - 2: I wish I could say this was a dilly of an issue, but alas I can't. So let me not dilly dally and get right to explaining my objections.

(1) Lois and Superman on the roof of the Daily Planet. I get that forcing these two characters apart alters the long-established and central dynamic of their relationship to this narrative, but it wasn't my decision. If it had been, I'd have abided by it. And this isn't the first time that little inconvenience has been ignored to service the plot - I distinctly recall Supes super-speeding Lois into the Planet offices back in "Detective" after their rendezvous at the Fortress for purposes that defy my understanding. Beyond simply putting them together (presumably for the self-described "Clois" fans), here it's logic and characters be damned in order to update both Superman and all of us to the global phenomenon of the crackling speed force that instantaneously aged and killed that Lexcorp worker a couple of weeks back. Given the context of the radiation tag, this is pretty much exactly like all of those scenes where characters spend untold hours driving between Smallville and Metropolis for two-minute conversations when phones and email and Skype would have done perfectly well. Big fail, Smallville, then and now. You can't write yourself out of a corner you constructed by pretending the corner isn't there.

(2) Turns out Lex-as-Tess writes with Tess's objectively distinct handwriting, despite weeks or whatever of not even being able to type coherent words into emails to Oliver. Talk about a lazy way to fast track progress on this storyline. Do I really have to get into this, or into how preposterous it is that the Daily Planet staff gets paid by physical cheques signed by the Publisher or Editor-in-Chief or whatever role Lex and then Tess were supposed (insanely) to have played at the paper after Lexcorp bought it? (As though that's how newspapers work - I swear, it seems all of comic book creatordom has precisely no idea what news is or what reporters actually do. And here in a story featuring putative journalists! It's just bewildering.) The technology in this universe has been shown to be analogous to our real world only up a notch or two, but they don't have direct deposit payroll? How convenient. Also, I mean, I'm no handwriting expert, but... you know what, really never mind. I forgot: fake science. How #@&%-ing convenient. (Yeah, I find this little development truly insulting.)

(3) Fake science. The "mind dive" with a dead Chloe being "made up as [Emil] goes" and actually working perfectly? Convenient doesn't even come close to describing this one.

(4) Scene of Chloe undressing and examining herself in the medical gown. Girl didn't get this kind of sort-of-sexy sequence when she was portrayed by a real live woman on TV. What's it doing in here?

(5) Chloe's big, just-as-campy-as-when-Darth-Vader-did-it-in-Revenge-of-the-Sith "Noooo!" at the end. As much as I won't be surprised if this turns out simply to have been Chloe's vocalization of the memory of Chloe-2 crying out, I'm past exasperated at Chloe's attachment to Earth-2. It was only logical that she would be somewhat traumatized by the encounter with her doppelgänger back in "Guardian," but after everything she's been through over the course of this series, she should really be functionally over that by now. In this case, she's reacting to the death of Lois, but it's not really Lois and she should damn well know that. Besides, she and we have known since issue 11 (let's call it a month in story-world time) that all of Earth-2 is "gone." Was anyone expecting Lois to have somehow avoided that fate? I appreciate there's a difference between being told something happened and being shown it happening, but all things considered (and no, I don't as yet have anything to say about the obviously alien ship whose lasers are what kill Lois-2) this strikes me as altogether arbitrary drama.

How Smallville, Smallville. At least there weren't any of those redundant character name labels.

Anyway, enough ranting. The scene with Supes, Impulse and Ma Hunkle (cool) was mostly perfect. The only thing that rankled me was the expositional dialogue where Superman explains to Impulse that the JSA was a family - it just clunked a bit, mostly because I already know all of that. And anyway, does anyone get the impression that the JLA has been trying to follow that cozy model in the intervening time? It doesn't to me. Take Impulse's snide response, for instance: "Thanks for the history lesson, but how's a building full of knick-knacks going to help me?" Real brotherly warmth and respect, dude.

But, oh, I can sense another rant ascending so let's call it. Or just about. Need to let y'all know that I won't be continuing with reviews (cue the fingertip violins) of the so-called parallel stories that have started to fill the old three-week-gap when the print edition is published. Those duties will pass to Michael J. Petty, aka Mike-El here on the site. Michael is a member and administrator of the Across the Airwaves (ATA) Podcast Network, where he co-hosts the DC Nation Podcast covering the DC Nation block on Cartoon Network and Smallville: Season 11. He's also been a regular commenter on my Smallville reviews, which I appreciate, and I'm happy to give him the reins once a month. So, please join me in welcoming Michael to the Superman Homepage writing staff. Over to you come Friday, Michael. Look up in the sky!

Art - 5: I believe I'm on record heaping praise on Jorge Jimenez. Same goes for this issue, though I'm questioning whether he replicated the section we see of the JSA group portrait or if that was digitally inserted. Because, if replicated, replicated pretty much perfectly. (The Jay Garrick segment was clearly replicated; I'm talking about the larger section we see earlier.) I could have done without the Chloe disrobing scene, but that probably wasn't up to Jimenez. Plus he executed it well, which is what matters in this section of the review, amirite?