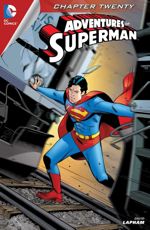 Click to enlarge
Frank (aka NotAnS): What just happened?
Sal (aka L0c0m0tiveF8): I...'m not sure. Everyone's going inside.
Frank: Looks like a few others are confused, too. This doesn't make any sense. We were ready to show Superman his destiny. Why's everyone backing out?!
Sal: There's got to be a good reason. Check the SMS's, see if there's any info.
Frank: Yeah, wow. The Blah-Blao Talk thread is on fire!
Sal: What's the deal? Are we... not doing this?
Frank: Oh, man. Superman had a fight with Metallo! It's just on the other side of the Planet.
Sal: Man, how'd we miss that?
Frank: Look! There's smoke coming up from the street! I can't see anything though.
Sal: But why's everyone going inside? Superman beat Metallo, right?
Frank: On the thread, LackingO2 says Superman got his butt handed to him. He's out cold on the street.
Sal: So... Supes is KOed? He won't be able to save any of us then.
Frank: Yeah. We won't be able to show him his destiny. Not today anyway.
Sal: Yeah. Let's just... Let's just go in.
Frank: How about heading to a pub? We could talk about this, make some sense of what to do next.
Sal: I don't know, man. I'm pretty bummed. I think I'm just going to head home.
Frank: Okay, okay. No worries. Let's get in touch later, though.
Sal: Okay, Frank. Talk to you later.
Frank: Sal. Praise Superman!
Sal: Whatever.

Story - 3: I'm going to go easy on this installment. I think I may be giving too much benefit of the doubt, but there was an overall charm to this entire story that I liked, even though it's ultimately a cop out.

I thoroughly enjoyed Superman's "pesky neighbor" undercover investigative reporting. That came across smoothly and was quite humorous. Establishing that the Church of Superman was a sham, not unlike some actual supposed spiritual institutions, was integral to the story. I'm just not so convinced by how Superman actually stops 900 people from leaping to their deaths.

I understand that having Superman seemingly defeated by Metallo was the catalyst that led to the Church's decision to not go ahead with their collective nuttiness; after all, if Supes is chewing on dirt in the middle of the street, how can he possibly save everyone? I'm just not so comfortable suspending my disbelief that every single person in the Church had the mental capacity to not jump. We're left with a lot to assume, and since there isn't much implied, the inference isn't exactly valuable. If you've burrowed yourself so deeply into a cult that you're willing to drink the punch for access onto the Mother Ship or plunge from a building to show someone his destiny, chances seem good that you've lost all semblance of rationality and any attempt to sway you back to the side of reason, even from the root of the cult, would fail. Sure, Superman's speech didn't stop the one guy from jumping, but I'm not entirely convinced that all 900 members would simply turn away, even with Superman spitting out pebbles. This was a deadly quandary for Superman, and while we always want to see Superman succeed at saving everyone, the path to that should be a little bumpier. In the end, "Saved!" just played it a little too safe.

A couple points of contention: Did Superman's voice boom over everything else in Metropolis that was making noise - over traffic, sirens, airplanes, the atmosphere - making it possible that every single member of the Church could hear his plea? Did everyone have a view of the fight with Metallo? I just assumed that with modern SMS and media access, Superman's message and fight would have spread quickly between Church members, but there's no clear indication of that. It's not a nitpick, either. There's a quality added to storytelling via attention to detail. Seeing the Church members sending messages to one another, in very simple paneling no less, would have added some such detail, and the story would have been better off for it.

Overall, "Saved!" was a bit of a letdown, but I like what it tried to accomplish and I give it kudos for that.

Art - 3: The quality of the art from last issue carried over here. The edges are still a little rough, but it mostly does the job.