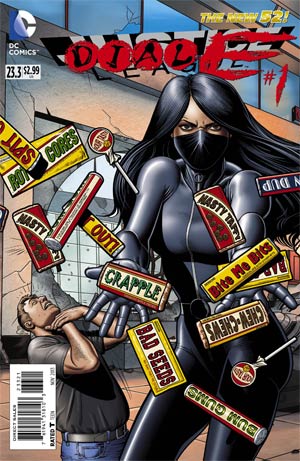 Click to enlarge
In a little town called Littleville (pun intended), a bunch of kids crowd around a dial which they found. One of the kids, named Gwen, turns the dial and becomes the super-villain Suffer Kate. Changing into many different forms, Gwen steals some cash and takes off with her friends. In an alley, they are encountered by some thugs, one of them named Tibb, who wants the dial back. One of the kids, Al, takes the dial and transforms into a few new villains to face these thugs. Eventually the cops show up and Al takes them all on too. But suddenly, a sniper shoots at the kid and the dial flys away from him and into the arms of Ben. Ben takes on the SWAT team single-handled as he transforms into a few new super-villains. Shortly after, a man named the Centipede cuts through reality to take back the dial. He and Ben fight until finally Ben is beaten. One of his friends picks up the dial to fight off the Centipede when she realizes there's no Q on the rotary dial to allow her to transform. This is explained as being because she, unlike her friends, is not "bad enough". The Centipede shows her how it works and just as he turns back into his normal self, he is knocked out by Rescue Jill.

I was really excited for the Villain's Month titles, especially the Justice League issues, as I thought they were going to shape the next few years of the New 52, so imagine my surprise when I read this! Darkseid, Lobo, Dial E, and the Secret Society. At least three of those are interesting, but sadly, Dial E is the one that is not.

When I read this I did not understand it the first few times. It was only when reading the book again, so I could write this review, that I finally understood it, and even now I'm not so sure I do. Let me make sure you all understand me so that you don't go and make a mistake, YOU DO NOT HAVE TO READ THIS BOOK! Dial E has NOTHING to do with Justice League or really the DC Universe at all (although it does at one point mention Metropolis, but that's it). They should have really just made Dial E the Villain's Month issue for Dial H if that book is still around, and if it's not then this story had no point or relevance at all.

I wanted so hard to enjoy this story, I really did, but I just hated it all the way through. It didn't help that each page was done by a different artist, which messed me up a bit while reading as I was trying to remember who the characters were (still don't by the way).

And just to clarify, the villain you see on the cover of the book, she doesn't even appear in the story. Not once.

Art - 2: I have to admit, I liked Jeff Lemire and Jock's art in the book, but all the other art felt... I don't know, too sporadic.

Cover Art - 4: I'll admit, I did enjoy the cover art, and the 3D version looked especially cool! Good job Brian Bolland (I wish you had done the interiors...)!