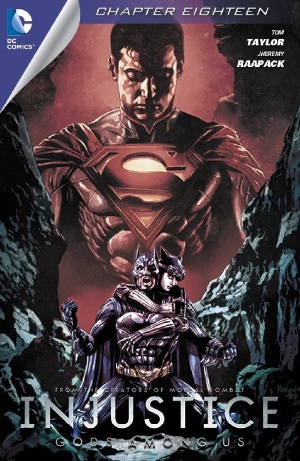 Injustice: Gods Among Us - Chapter #18

"Injustice: Gods Among Us" - Chapter Eighteen

Click to enlarge
Batman and, a little more reluctantly, Catwoman are on their way to a rendezvous, the Bat Signal lighting their way through the Gotham night. At Gotham Police Headquarters, they find not Commissioner Gordon but the President, who doesn't want Catwoman involved but relents at Batman's insistence.

Inside, they discuss the Superman threat - the whereabouts of the taken Arkham inmates are unknown, peace between Israel and Palestine has been imposed under threat of heat vision, Wonder Woman has led a force into Burma, Shazam and Green Lantern have put on a "massive show of force" in Syria, and Raven "literally terrified" the "warring nomadic tribes of Sudan... into submission" with a full-on Trigon apparition.

Everybody agrees that "stopping bloodshed" is good but not everybody agrees with Superman's methods. Batman tells the President that he can take Superman down if it comes to that, but Catwoman confesses that that's not what they came to say. They tell the President that he "needs to be a better leader" and name a number of social issues that the government has been neglecting (health, education, gun control, poverty, the environment, marriage), which Catwoman says is why so many people have been supportive of Superman - they are "disenfranchised and disheartened."

The President takes offense at the suggestion that he simply trade one set of costumed dictators for another, but Catwoman reassures him that they're not telling him what to do so much has "asking [him] to do better." He says he'll try and hands Batman a dossier of candidates to join the resistance. Batman says he has his own intel, and he and Catwoman split up to recruit some teammates, including Aquaman, Batwoman, Black Canary, Black Lightning, Captain Atom, Green Arrow and Huntress.

Green Arrow says he said he'd listen but hasn't agreed yet to join the movement. Captain Atom, however, is more clear, asking bluntly: "What's our plan of attack?"

Story - 3: Now that I have spent the nearly two hours required to watch all of the game's cut scenes, I can tell you this: that story, though fragmented and formally repetitive in all the wrong ways when removed from the context of the game's actual battles, works in a holistic sense much more effectively than the comic tie-in can now hope to, post game release. But this isn't a review of the game's story, so I won't expand on that here (though requests for such a review might not go unheeded, so find some way to let me know if you'd like that and we'll look into it) beyond making these two associated observations:

The holistic success of the game's story is dependent on the audience being let in on the alternate dimension conceit from the very outset.

The comic's story would have fared much better (in my eyes, all other things considered), had it reached the point where Luthor discovers the alternate dimension before the game was released.

The second of those observations, which I have made before, is most germane to us. The comic's plot is clearly leading up to the discovery of the alternate dimension, a development that would have been reached far more convincingly in a surprise reveal at the appropriate time had we had no good reason to expect it. At this point, that is spoiled - certainly, it's conceivable that some people will have managed to avoid all of the promotion for the game, but that could not have been the marketing strategy, or, if it was, the people responsible should be sacked and fed to the llamas on Monty Python's farm.

As for this issue, we get two things: continued introduction of characters (though I don't know how many of them are, or will become, playable) and further expression of a liberal socio-political agenda, with which I am perfectly comfortable admitting to be more aligned than not in this life while also being completely turned off by its inclusion in this story. It just doesn't ring true under the narrative's prevailing conditions, and while it's surely intended to cast (I think specifically) ongoing government gridlock in the US as similarly symptomatic of the corruption of the powerful, that's also the reason it fails.

What once might have been described as allegory (or close enough) has become just another piece of too-topical didactic fiction whose relevance is questionable at best. This stuff was awkward when Denis O'Neil and Neal Adams were doing it back in their Green Lantern/Green Arrow team-up. At least then it had the virtue of being revolutionary. Here it's just kind of sad - not for the sentiment, which is still honorable, but for the ham-handed way it's injected into the story.

Art - 3: I do enjoy Raapack's pencils, though, especially their roughness in this dystopian context. They were especially rough in this issue, though, like an unwashed bayman at the Taj Mahal, and not necessarily the best foundation for the "Ikari Studio" colors.