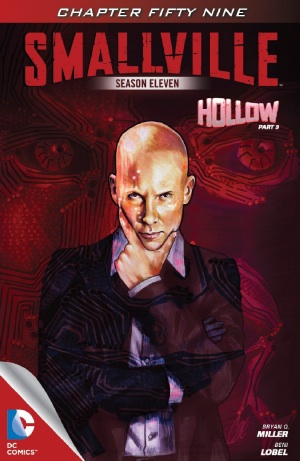 Click to enlarge
Franticly entering S.T.A.R. Labs, Tess Mercer initiates a conversation with Hank Henshaw, who is currently a disembodied head. Tess begins to vent to Henshaw about what her obsession with revenge is doing to her, to which Henshaw reminds Tess of his doings as the Cyborg-Superman. Henshaw then tells Tess to remember that she can still move about and see the world, and that she is also doing right by herself and those who she cares about.

Elsewhere in the complex, Dr. Emil Hamilton speaks with some of his employees about new "Zeta Beam" technology when Security contacts Emil to let him know that there has been a breach. Outside, a group of men enter the compound and it is revealed that they are working for Lex Luthor himself, who assures Otis that he controls his own destiny. In the control room, Emil has his group encrypt and transfer all of his files on Superman and his team to a beta site.

After they're finished, they head for a panic room, but on the way there Emil takes on a guard, which results in him getting shot at point-blank range. Tess's panic turns to anger as she puts herself in control of a robot to face the intruders and avenge Emil's pain.

Story - 4: Again, not very fond of CorTessa, but I really did like this chapter. I really enjoyed the conversation between Hank Henshaw and CorTessa as I think it makes perfect sense that they would talk, as they, more than most, can really relate to each other.

Now, I still am a firm believer that the Cyborg-Superman should always be completely evil. I guess reading Return of Superman, Sinestro Corps War, and Superman vs The Terminator recently had a hand in that... But I actually like how Hank Henshaw is written here and it seems like this is what they had possibly wanted to do with Metallo after "Upgrade" in Season 9. I thought the flashbacks to "Guardian" were also nice, and it reminds people who Henshaw is after not seeing him for over 50 issues/chapters, unless you only read the print and then it's only been about 9 or 10 (the Specials are its own print series as opposed to the normal Season 11 comic).

Like I said last time that I wrote a review on "Hollow," I like that CorTessa is able to control robots, vehicles, and any sort of technology, it gives her something to do and makes her different from Chloe's version of Watchtower at the same time. I really look forward to seeing her take on the soldiers in the next installment of "Hollow" and hopefully having a scene with Lex as well.

Finally, I really liked the line Lex said to Otis about destiny in this chapter. Destiny is the main theme of Smallville; it always has been since even Season 1. I'm really glad that Lex sees his destiny the way he did before the mind-wipe in "Finale" as he sees himself as a [evil] businessman who is above the law. That is the embodiment of Lex Luthor. Even in the Christopher Reeve "Superman" films and in the Silver Age of Comics, Lex Luthor always saw himself above the law, and better yet, he saw himself as the good guy. That is when Lex Luthor is the most dangerous, when he sees himself as the righteous one and Superman as the villain. The psychology of Lex Luthor, in my opinion, is just as interesting as the psychology of the Joker. A villain in which I would really like to see Lex either team-up with or meet sometime in this universe. Because as much as I like Batman and Superman together (see my Batman/Superman reviews for more), I love me some Lex Luthor and the Joker interaction.

Anyway, enough of my rant on that, I enjoyed this chapter. Still not a big fan of this story (give me a Hal Jordan/Barry Allen "Special" please!), I have to hand it to BQM; he is keeping me entertained and waiting for the next chapter!

Art - 5: As usual, I liked the art on this book a lot. I usually do when it comes to the Smallville: Season 11 books. However, I swear there was one panel of Hamilton's face that looked more like Henry Cavill than Alessandro Juliani... But hey, nobody's perfect!