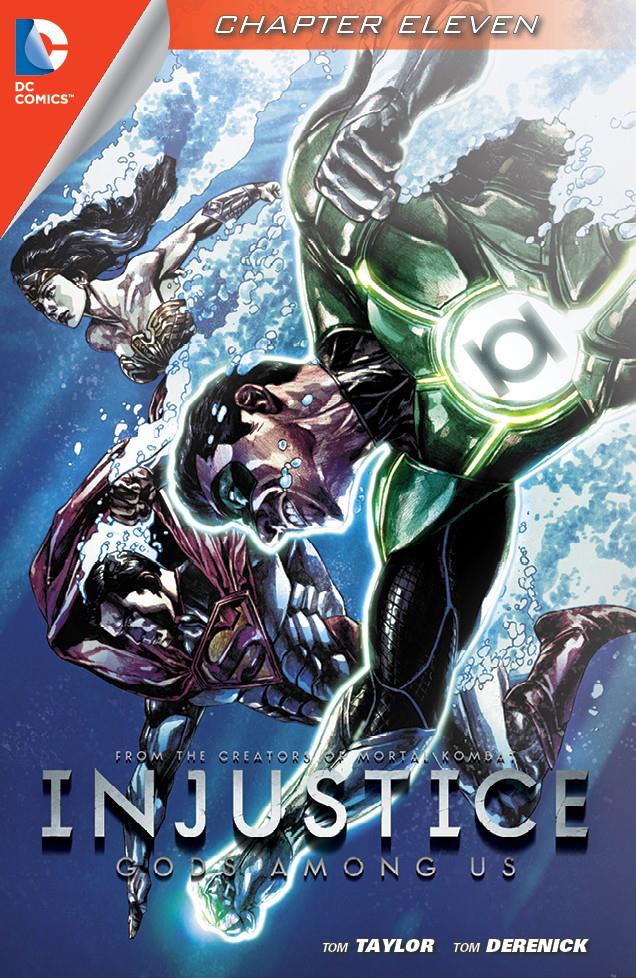 Injustice: Gods Among Us - Chapter #11

"Injustice: Gods Among Us" - Chapter Eleven

Click to enlarge
Aquaman is getting down to underwater business, telepathically summoning some deep-dwelling sea creature to aid the Atlanteans in battle while, topside, battle rages on between the Atlanteans and the Justice League. Suddenly, Aquaman reaches up through the water and grabs Wonder Woman by the ankle, pulling her down into the ocean. But not before Captain Mar... excuse us... Shazam takes note.

Meanwhile, back at the Batcave, Superman challenges Batman on his reasons for never having killed Joker, suggesting it's based on a kind of love Batman had for Joker and the games they'd play. But when Batman denies the accusation, Superman turns on him in a rage and screams "Why did you let him do this to me, Bruce??"

Back in the Pacific Ocean, Wonder Woman is struggling to free herself from Aquaman's attack when Shazam intercedes and flies off and out of the water with Aquaman. Shazam tells Aquaman that he and his army are outmatched and that they should stand down but Aquaman says it isn't only surface dwellers that have weapons of mass destruction.

Superman confides in Batman that he lost more than a wife and child; he also lost another Kryptonian, "someone who would have made [him] feel less alone." He then proceeds to accuse Batman of being a poor father to Dick and Damian, which prompts Batman to strike Superman across the jaw.

The Atlanteans, meanwhile, have begun to retreat. Green Lantern is first to spot the coming tsunami, while Hawkgirl spies something beyond the tsunami's waves. Shazam can't believe what he sees, calling it "impossible" and "a myth."

Superman wants to see Batman's hand - the punch caused a hairline fracture to the third finger and some ligament damage. Then an alert about the battle in the Pacific Ocean comes across the Bat Computer, prompting Superman to leave. Batman tells him to wait, and then tries to reason with him once more about the global cease-fire, telling him "You're a better man than I am" but refusing, just the same, to follow him. As he's leaving, Superman tells Alfred (who had addressed him as Master Kent) he doesn't have to call him "Master," to which Alfred replies, "Good. Let's remember that."

Back at the Pacific, bad has gone to worse: It's the Kraken.

Story - 2: Phew. So. What tack do I take this week? Talk about the overall narrative or focus squarely on the Man of Tomorrow (an epithet I think I have to use more literally here than I ever have before)? Well, we are the Superman Homepage, not the curiously and sort-of-frighteningly gleeful Forbes: "To sum up why you should buy this issue: Batman punches Superman, Alfred verbally slaps Superman and Aquaman summons the Kraken. What else do you need?"

Uh, is that a rhetorical question?

The Man of Steel, in this issue, has officially become unrecognizable to me and it's not because he doesn't "punch" or "slap" Batman and Alfred back.

(By the way, I'm not interested one way or the other in whether you will or will not buy this issue. You have my word on that: I will not try to sell you anything in this review. Editor's note: But I will! Need a break from yet another garrulous Marc Pritchard review already? Go on and check out the Superman Homepage Online Store, the one-stop-shop for all your Superman merchandise! - Supply-Side Steve)

You could maybe get past Superman's (conveniently) panic-induced failure to locate Lois and to stumble mindlessly into Joker's little trap. That that trap then worked out so utterly perfectly according to Joker's plan was just so comic book, you maybe reasoned. He didn't know it was Lois! And even the retaliatory killing seemed like it had to happen, given where we know this thing is going and considering it was no less a Big Baddie than the Joker (though here you were probably really losing your marbles, especially if you are an active member of this site). But Superman's complete and total failure to take any responsibility for his actions, instead pinning it all on not only the Joker but also, and so much worse, Batman? With one line of inane dialogue - "Why did you let him do this to me, Bruce??" - Injustice has finally wrought the full-scale transformation to our boy's character that we of course knew was unavoidable but which I personally feel would have been much more effective had it been saved for nearer the proper climax of the whole series.

And which I further suspect even Injustice, at this point, still thinks isn't complete.

Because, really, we are still talking about an extended ad for a combat-based video game. I'm sure a much more "action-oriented" exchange (read, in the context of the game and that Forbes review: a fight!) between Superman and Batman is still to come, and it might even occur at the actual climax of this story, but you and I will know that, for Supreme Leader Superman (or whatever), this was the defining moment, the point of no return, when he had finally blamed somebody else for his own actions (remember at the UN back in Chapter 6 he was all about taking responsibility, even if it didn't necessarily belong to him, a mid-stage foot over the line) and crossed over into villainy. He is now the victim who figures he's owed recompense from the effectively innocent.

Of course, he'll also remain blind to this truth - another hallmark of the villain - and because there's still a game to get through, any effort in the remaining pre-game pages Bruce might make to reason with Clark are certain to fall on increasingly deaf ears. I'm sure palpable heightening of the stakes will continue, and the Kraken is clearly a move in that direction. Not really much of a fight for Superman, of course, but representative of the potential for significant destruction.

But the difficulty that remains for me after I take off my Superman Forever lenses is how is he going to be able to tell whether to side with Aquaman or Wonder Woman when he arrives on that scene? Because aren't they all operating on the same basic principle? Go ahead and beat the crap out of those who defy you if that's what you think you have to do? With great power comes great ability to use that power! We came here to do two things: have a conversation and kick some ass... and we're all out of conversation!

Seriously, Aquaman's motivation is identical to Wonder Woman's and Superman's, except that Aquaman extends his aggressive, example-making brand of protection to non-humans. If Aquaman ends up in Batman's faction, it will be one of the most arbitrary things I'll have ever seen.

(BTW, that was me who inserted the "Editor's note" earlier. Funny gag, right? Steve is nowhere near that shameless. I just really needed to build my own comic relief into this one, all things considered. Honestly, crafting that had me killing myself, ALF-style. Because if we don't laugh we cry, right? I'm also not at all sure whether Steve would hew to "supply-side" economics, but I had to have alliteration for that comic book editor's note authenticity and "Savvy Steve" just wasn't cutting it, so, you know...)

Anyway, 2 of 5 on the anti-climactic closing of Superman's moral arc, one whole point of which is thanks to Alfred's character- and context-appropriate remark to Superman on his way out.

Art - 2: This is another backslide in overall quality. At times, these pencils looked like they belonged in a children's coloring book, not a professional comic book, even on that is more advertorial than usual. And figures at a distance? Forget about it. The two close-up panels on Captain... sorry, Shazam's and Aquaman's faces just before the Kraken appears were both pretty good, though.