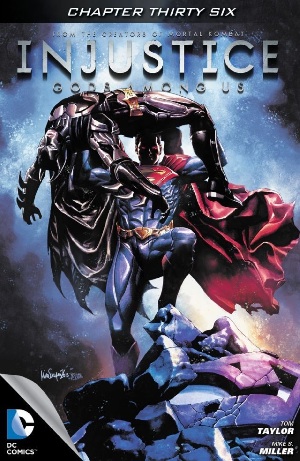 Injustice: Gods Among Us - Chapter #36

Click to enlarge
Batman screams in agony as Superman breaks his back. Superman flings Batman to the floor and proceeds to retrieve the "super-pill". However, Batman won't stay down. Superman forces him to the ground, only to discover that Batman was distracting him to allow time for the analysis of the super-pill to be uploaded. Superman tries to force Batman to tell him where the data was sent, but Batman guilt trips Superman into stopping, calling him a "torturer" and a "thug". Alfred, who has taken the super-pill, head-butts Superman and beats him into the ground of the Batcave. Alfred then retrieves Batman and escapes to places unknown. A day later, Superman addresses the United Nations, promising to safeguard the Earth from the "terrorist" Batman and all like him, as his super-police force is unveiled for the first time, and so ends year one of Injustice: Gods Among Us.

Story - 2: What happened?! There was so much promise after the last two installments, that there was every expectation for an excellent closeout to Injustice before its hiatus. Wrong. Wrong! This issue was hackneyed, trite, and wrapped in a cliché. Is Superman evil or not? We were shown a Superman who was efficient in his badness, and willing to break Batman to get the job done, but he flinches at torture? If Batman is that much of a threat, why is he allowed to live, where Green Arrow, who was no threat at all, had to die? The dialogue between Batman and Superman isn't just bad, it's unnecessary. Batman is your enemy, take him out. Stop making half-steps and remove the problem as you've done with all the others. Faster Superman! Kill! Kill! If not, the scene is just so cheap, as Batman uses his Bat-Popularity to escape once more, unharmed. Superman's inability to keep up with his property is also suspect, as he didn't need to defeat Batman so much as he needed to retrieve the super-pill. Once again, he's a dunce, whereas Batman has the luck of popular merchandise. That Batman is conscious after being handled as Superman does is ludicrous, and it makes Alfred's entrance less worthy, that Alfred's actions defy any sort of reason that has been established in Injustice.

For Alfred to accomplish what no one, not Kalibak, Martian Manhunter, or Captain Atom has been able to do, goes to the substance of the super-pill. Strong enough to hold Superman's arm for a wee bit, as Martha Kent did is one thing, but to beat him into the floor is something altogether different. Why would Superman make a pill that would enable someone to beat him silly? How could he accomplish this even with Lex's help; the world would be teeming with potential disasters if the pill is given to the wrong person? All those queries aside, are we really supposed to believe that Alfred can accomplish this even with the super-pill? Superman has shown just how resilient, durable, and powerful he is. To have Alfred headbutt and beat him into unconsciousness is laughable. Nothing short of a 10 megaton bomb can do it, and even then for a few seconds. The line about not hurting his family anymore, is way off, as Superman's argument is with only Batman, not Damian who Alfred seems to be all right with, in spite of him killing Nightwing. It's shock value and it is selling, hence Injustice going on hiatus and not ending.

The popularity of this series is surprising to me, and not because I disagree with the premise and having Superman be made into a killer. No, it's the execution; the fact that the story contradicts what it establishes and what has been established in the game that it was created for. In the video game, it's made pretty clear why Batman needs to bring other-dimensional counterparts to handle Regime Superman: he's too strong to beat, super-pill or not. Alfred's scene makes aforementioned false, and if Batman could reproduce the pill, which is the case, why did he need Superman to take on Regime Superman? Just send in Alfred again. However, with all that noted, the shock value and seeing just what new travesty will happen, is enough to make up for the spotty plot and circuitous dialogue... I suppose. It's also a reminder of why the proper superheroes of the DC Universe are still struggling, despite the New 52 reboot. Injustice: Gods Among Us has enough faults to define hamatria, but it's entertaining. For someone who wants to be entertained, and isn't concerned with continuity or the integrity of the characters, or the consistency of the plotting, Injustice is a weekly treat that has sadly come to an end... for now.

Art - 3: Derenick should have finished out what was left of the series. Miller's art isn't bad, but when he draws Superman "surprised", Superman looks like a total fool, or worse, an impotent bully.

Cover Art - 4: What was that about a book and its cover, again?