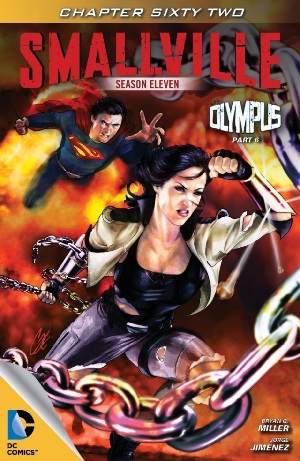 Click to enlarge
Superman sees smoke in the distance at Steve Trevor's apartment and knows that's where Diana is; he also sees that the DEO and the military have her surrounded. And off he goes, Lois in hot pursuit on the road below. For her part, Diana is impressed with that tank's craftsmanship but still sees it as a beast that must be slain, which she promptly does, using a pair of chain lengths to snare and flip it end over end as Superman swoops in to clear the soldiers inside from the ensuing blast. Trevor emerges from the apartment and refuses a direct order to hand Diana over, earning himself a "burn order." A sniper opens fire but our boy is there to catch the bullet inches from Trevor's face. Superman is not impressed with any of this and says as much to General Lane, who urges him to choose his battles. Diana gives herself up on the agreement that she will be taken to see her mother. Superman tells Trevor he should run, given the burn order while, off in one dark corner, Felix Faust bleeds to strengthen his magic and, in another, Diana's mother, looking every inch a Wonder Woman, is trapped behind glass.

Story - 3: I'm just going to admit it: I haven't got really any idea what I'm supposed to care about in this story. Diana is searching for her mother, whom we last saw, apart from a framed photo, carting young Steve Trevor off to his presumable death; Lois is just kind of there; Trevor is just kind of there (because he'd have to be if Wonder Woman is in it, I guess - he's even had a that's-so-Smallville shower scene!); Superman is just always kind of there (though that's as it should be, notwithstanding that he no longer resembles Tom Welling in any way whatsoever that I can suss); Faust is evil, magic and cliché; and Bones is weird, off-putting and ultimately cool... but he's not sympathetic. I think it's supposed to be a mystery, but it doesn't feel very mysterious. It's not bad, per se, just kind of bland. I don't know. This issue was heavy on action, obviously, and was mostly free of goofy little pull-ya-out-type errors and/or inconsistencies, too (which if you've been reading these reviews for any length of time you know I looooove when that happens). It's also, visually, anything but bland, and it's hard not to appreciate Diana's little trick with the tank. I'm not sure what caring less about Faust would look or feel like, and I'm somewhat beside myself with facepalmery to see yet another "iconic" costume locked up in a display case. Who knows where that will go? I was hoping Diana would just get to keep the costume she has, but then I never really much cared for Wonder Woman, either. Eh.

Put it this way: Jimenez is driving the moped of my interest in this story. Whatever that means.