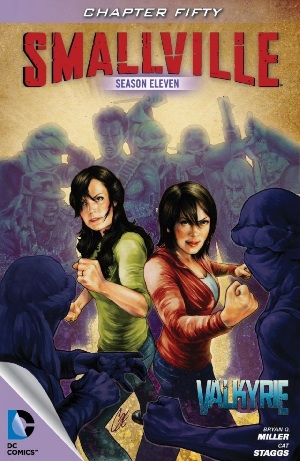 Click to enlarge
Catching their breath from the last cliffhanger, Lois Lane and Lana Lang are relieved when they see US Air Force helicopters headed towards John Corben aka Metallo. However, instead of them taking out Corben, he uses his new-found nanites powers to add the helicopter blades to his body, making him even more of a threat.

Chasing after Lois and Lana, Corben taunts the two with threats that after Africa, he will take Superman head-on. Some soldiers come to the rescue allowing Lois and Lana the chance to slip away, only to have their own guns added to Metallo's arsenal. Corben shoots at the two as Lois, wearing her bullet-proof vest, jumps in front of Lana, taking a bullet or two for her.

Hot-wiring a truck, Lana runs over Metallo as a distraction for Lois to get a bazooka ready to fire. But instead of firing the weapon, Lois allows Metallo to take it only for her to shoot the warhead causing an explosion right in Corben's face, knocking him out. The "Dynamic Duo" then proceed to take Corben's Kryptonite heart out of his chest in order to prevent him from being a threat.

Later, D.E.O. comes to pick up Corben and take him to an undisclosed location. Lois reassures Lana that the "Angel of the Plateau" will be put in good lighting in her article. Lana tells Lois that she is indeed happy for her and Clark and that she has found her place here in Africa with people who need her, even without her superpowers.

Story - 4: What else can I say but scream in joy that Lana did NOT get her powers back! Like I have said many times before and will repeat here: Lana should NOT be Clark's equal! I'm not saying that love interests or females cannot have super-powers, as I love Kara Zor-El aka Supergirl, but I was not a fan of how Smallville portrayed Lana Lang for the most part, especially in Season 8 when she should have just been done at the end of Season 7 like the actress originally wanted to be. All I can say is that a lot of the issues I still had with Smallville when the series ended have slowly been being solved with Bryan Q. Miller's Season 11 comic, whether it's the main book or the Season 11 Specials (the chapter that I review once-a-month). Lana to me has always been this character who could never find true purpose in her life. I mean, she ran off to Paris and yet she was still drawn back to Smallville (it's because she wasn't in Kansas anymore...). I think being in Africa with orphaned children who need her is exactly where she should be. She's away from Clark, she doesn't have anything holding her back, and she can do what she was called to do while starting her own new family. My question is, whatever happened to Aunt Nell?

I really liked the Metallo stuff in this chapter once again, because BQM writes John Corben just like he was written on the show. Not only that, but my one problem with Smallville's Metallo, my ONE issue, was that he was TOO human. Season 11 has made him so much more, and now that he can add technology to his body, there's no telling what he can or will do when he decides to go after Superman again! That's what always makes super-villains so interesting! We don't understand their mindset and we don't know what they're going to do. Metallo isn't always like that, especially on Smallville, but I have a feeling that the next time he appears in the Smallville-verse, he'll be back with a vengeance.

I liked the inclusion of the Department of Extranormal Operation aka D.E.O. This organization has appeared countless times since its initial appearance in 1998 in Batman #550. Arcs like Superman/Batman: Public Enemies and films like Green Lantern have included this agency in many metahuman affairs. However in the New 52, A.R.G.U.S. has taken over that role which is why I was glad to see D.E.O. in some sort of DC Comics comic (say that three times fast) recently. Although I have been told that D.E.O. has appeared in the New 52 Batwoman series, but I cannot confirm this as I do not read the book and probably never will.

Finally, Lois was much better in this conclusion to "Valkyrie" than she was in the first chapter, especially when she blew up the rocket launcher, I mean come on! That was just cool! The one thing that bugged me still about Lois in this issue/chapter was when she said to Lana, "Go! Avenge my boobs!" Now, that was kinda uncomfortable to type as I'm sure you can all imagine, especially since it seemed very out-of-character for Smallville's Lois Lane. I could see her saying something like that in Seasons 4-6, but now, after all her character development in Seasons 8-10, really? Oh well, I still really enjoyed this conclusion, and over-all I did like "Valkyrie". It wasn't the strongest Smallville arc I've read, but it definitely tied up loose-ends, both literally and figuratively.

I will see you all in two weeks when I review the first issue of the new New 52 ongoing series "Batman/Superman" and in four weeks with the next Smallville: Season 11 Special "Hollow"! Thanks guys for joining me for "Valkyrie"!

Art - 5: Pretty much out-standing artwork all around by Cat Staggs, I really like her work a lot, especially on Smallville: Season 11. I have no issues with in, in fact I laughed when I saw how short Lana was compared to Lois at the end. Continuity for the win!