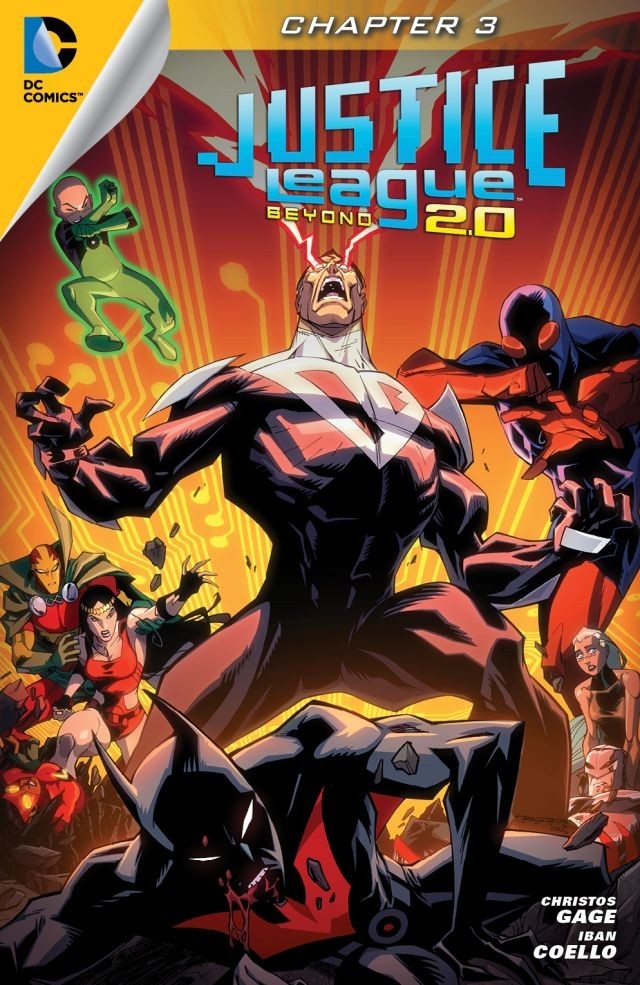 Click to enlarge
Kal Kent (Superman) and his firefighter colleague, Rita, are trapped inside of a burning building. It seems grim, but they're able to jump to safety, which leaves Superman remarking at how he didn't need to be Superman to get the job done, and neither did the firefighters. He resolves to go on a date with Rita, but solicits the Justice League for help, as he hasn't been on the scene for some time. He's given different advice from each member, but Captain Marvel, who is "old-school," gives Superman the advice he needs and Superman takes Rita for a time at the city fair. The date is going well, and Rita is about kiss Kal, when they're attacked by a giant robot, pre-empting any osculation before next issue.

Story - 3: Again, solid story, but the time between the release of this installment and the last leaves a wee bit to be desired. Superman is one of the few superheroes that can be put in a date night situation, a first date at that, and still have it make sense and suitable story. However, it's been over two weeks since the last issue, and the time elapsed makes the story feel like filler when it shouldn't. Still, the development of Kal Kent and the assorted personalities of the Justice League Beyond are still handled well.

The humor and comedy of Batman and Micron is hard not to smile at, as if one could imagine Superman saying, "Schway". Barda and Mister Miracle reveal a great deal of themselves in fewer than five panels, which is a Golden Age feat. The best is reserved for Captain Marvel, who has his correct moniker and not "Shazam!". How exactly it is that Superman gains entry to the Rock of Eternity is beyond this reader, which should be a more difficult feat than accessing the Fortress of Solitude. It seems that Shazam transformed into Captain Marvel, which can't be right, but as Captain Marvel begins his existence and is a Superman analogue, who better to dispense advice to the Man of Tomorrow?

The date itself meanders until Rita decides to up the ante, which is fine by me. It's always easier when the girl takes the lead, IMO; Less chance of misunderstandings and embarrassment. What I didn't notice was that Rita is pretty much Lana Lang. She's attracted to Kal Kent straightaway, a green-eyed red-head, and definitely the aggressor in this party of two. It will be interesting to see how it all plays out.

Art - 3: There's little for Coello to render here in the way of dynamic action, and we don't give high marks for stills of stills.

Cover Art - 3: Have you sorted it out yet? You've got until next issue before I let it out.