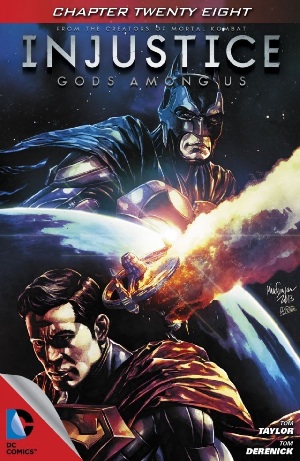 Injustice: Gods Among Us - Chapter #28

Click to enlarge
The League now knows that Batman has been spying on them, using the Martian Manhunter to pose as Hawkgirl to get the job done. Robin alerts the League that Batman will strike preemptively, using all the data at his disposal about them, including family and friends. Superman decides that he's had enough and makes an announcement on all emergency broadcast systems across the world. He alerts the world that Batman has abducted Hawkgirl, and nearly announces Batman's secret identity, but Batman initiates "Protocol Icarus" and crashes every computer system, and knocks out the Watchtower as well. Superman forges ahead, determined to complete his transmission, and with Cyborg and Lex Luthor's help, does exactly that (though Robin had to tell them what to do!). Batman informs Alfred of the situation, who has all ready prepared a list of things for Batman to take, with Alfred being on top of the list.

Story - 4: This issue couldn't have come at a better time, not with the big reveal at SDCC regarding a certain Man of Steel and a Dark Knight. The reaction of the League to Batman's betrayal, and this being additional perfidy to add to his earlier actions, is stock up to the point of Superman's reaction. The League seems dumbfounded that Batman could do something of this nature, though they know and have worked with the man for X-amount of years. That's the Meme of the Bat: Batman pays attention to everyone, but no one pays attention to him; only he notices the daily things that people do. No one, not even the people he works with realize what he's truly capable of... because they're super-powered fools. Superman finally banishes that stock reaction when he tells the world what Batman has done, and it's a fitting situation to show that the smartest man in the room isn't all that bright. Superman has the world, the world, on his side and Batman has moved against him with a foolish notion of impunity. One announcement is all that it takes. One announcement is all that it's ever taken. The niggling aspect is that none of this seems to be clear until Superman crosses the line into "evil". Superman has killed and that means he can do things that he hasn't before, like use common sense and realize that Batman is just a man like everyone else, with a secret to protect like the rest of the League. He also seems to finally understand that Batman's actions cross the line as well. Batman spies on the League, abducts Hawkgirl, placed a virus with Cyborg the first week he met him - None of the aforesaid rings of heroism.

Protocol Icarus is part of the Meme of the Bat. Somehow Batman has created a protocol that can co-opt the transmissions of every system on Earth to protect his secret ID. The notion reeks of selfishness to the Nth degree. Think of all the applications Batman could be placing his vast fortune and wealth towards, but instead we're shown Protocol Icarus. The time and money and effort to do one thing, maintain the Meme of the Bat. Batman's the smartest lad in the room, even if it doesn't make much sense. Protocol Icarus is the mark of a supervillain, not a hero. You have to wonder if Taylor recognizes this. The counter is effective, if not flattering. The League makes it through the Protocol only because a non-superpowered teenage boy (unless he did take that pill) reminds them that they're the bloody Justice League of America. Superman could have accomplished it himself (there's a no-prize in it for you if you know how), but Cyborg and Lex are a suitable alternative. No matter how much writers or fans may want the rivalry or the badass moments with Batman, he's just a regular guy dealing with people who can overturn his years of planning a Protocol Icarus in seconds. The fact that he's able to take down the Watchtower is ludicrous. Batman shut down Cyborg with a virus he implanted when he first met him. Cyborg's response? Check none of the Watchtower systems for the same. It's telling how much you would have to swallow to believe that Batman is capable of all of this, and that the League is simple enough not to take their own precautions against someone who is clearly against them as any rogue would be.

So call it a half-step forward on the slow plod to wherever Taylor is taking us. It's also a reminder how much enough has to go into making The Batman a contender with those who so clearly overmatch him. It's a two-step tango, where both the reader and the League have to lower their IQ to soup to suspend disbelief. Still, a much better read than what we've been treated with for the last 3 weeks.

Art - 4: Derenick. Say it soft and it sounds like praying. He's the artist of this series. Check out his Superman. Notice the difference in Superman's facial expressions as compared to everyone else? It's as if under Derenick Superman is slowly taking on the visage of a villain a la Doctor Doom or Lex Luthor. Fun stuff to watch.