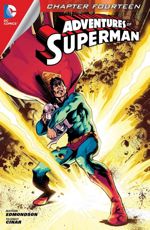 Click to enlarge
Superman continues his struggle to not only keep an infant princess alien from being killed, but also from bawling her lungs out. Superman soars around, trying to entertain the tyke. It's no use though, and he soon discovers why - someone made a stinky. The Man of Steel has singlehandedly taken on gangs, galactic despots, supreme interstellar beings, massive destructive robots, and the greatest criminal minds of our time. But when it comes to poopy diapers, Superman needs help.

Superman goes to a church where a nun agrees to help the baby. Just then the baby's pursuers strike, blasting Superman across the churchyard. A battle ensues. Superman confronts the leader of the kidnappers, where after some fisticuffs Superman tosses the leader out into the far reaches of space. Swooping down from the upper atmosphere, Superman is just quick enough to save the nun and the child from a blast from the alien craft.

With the gang subdued, Superman leaves the child in the care of the nuns. He decides not to bring her back to her world. Someday, he postulates, someone will come looking for their princess.

Story - 1: Well, that didn't go anywhere. I feel stranded. This story turned out to be a big dumb punch-up with a cute baby to tug the heartstrings. We didn't find out where the child is from or why she was pursued, though it seems there was an attempt to collapse the throne of her world. However, if that was the implication, the inference is a little hard to grasp.

Superman is a bit of a knucklehead in the story. His idea of a safe place for the baby - a princess whose pursuers want to kill her at any cost - is a church. A church. Not a police station or a military compound or STAR Labs, but a wooden church watched over by a nun. The outcome of that dumb decision was easily foreseen. Even after the church is destroyed, and the threat thwarted, Superman continues his boneheadedness by leaving the baby with the nuns. What makes post-seminarians experts in the care of alien babies with inexplicable mental powers? I know what you're thinking: what made the Kent's experts in raising a superpowered alien? Well, they didn't exactly know at first Clark had powers, or that he was an alien. Besides, Clark looks human. The ankle biter in this story is purple. We have a lot of wonderfully diverse skin tones among our species, but purple isn't one of them. The nuns couldn't say, "Oh, this is my cousin's little girl from Hare Bay, Newfoundland." It wouldn't work. And besides, that would be lying. What is most strikingly dull witted about leaving the child with the nuns is the chance that someone else may come for her. Superman says himself that he believes someone will come in search of their princess. What's to stop others from coming to kill her? Superman has put the nuns in potential danger - again.

"Infant in Arms" is riddled with unanswered questions, literary laziness, sketchy decisions, and a deep sense of being rushed for publication.

Art - 4: The quality of the artwork carried over from the first entry in the story. Top shelf stuff.