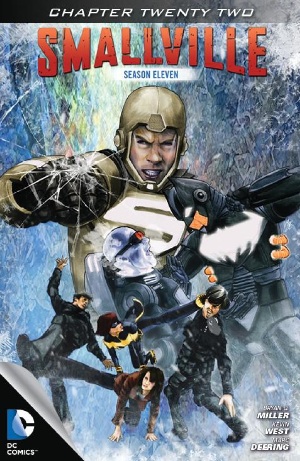 Click to enlarge
Lex reveals to Tess, still trapped in Lex's head, that he's figured out that she's trying to control his body while he sleeps and that he will be taking measures to prevent her from continuing to do so. Clark wakes up from his bullet wounds on Batman's Leviathan, with Lois at his side. They discuss the implications of Clark having outed himself as Superman to Batman and meet Barbara Gordon, aka Nightwing. Bruce and Clark discuss next steps, whereupon Bruce reveals he has built armored suits for himself and Clark. They decide to "step out for a bit," leaving Lois and Barbara behind on Leviathan.

Meanwhile, Oliver Queen is trying to convince the police that he was not aiding a criminal operation but it's not going well until Chloe arrives with proof. Back at the port, a group of thugs descends on Leviathan, intending to pay Superman a visit while, over at Prankster's and Doctor Freeze's hideout, Prankster reveals he has a final prank in store for everyone...

Story - 2: Some people believe that if you don't have anything nice to say about something, you shouldn't say anything at all. It's not a bad rule, but I suspect it's one that most of us have trouble living by, except maybe when it comes to talking about other people. But I'm going to do just that insofar as it pertains to most of this issue, which by and large parked us in neutral as it went back over a whole bunch of stuff we already know. Those ridiculous name labels even made a return, and were underscored this week as the truly redundant devices they are in their use in scenes where the dialogue itself regularly included the names of the people in them. Yikes.

No, I'm going to say it: I really don't think Mr. Miller knows what to do with this Tess-and-Lex-conjoined-in-the-mind thing. I'm looking forward to being delightfully surprised at some kind of pay-off, but honestly I think he's got himself the kind of deceptively simple idea that ultimately demands true fullness of understanding and planning if it's to be executed well. Seriously, as much as I appreciated the evident frankness of his answer to the question I asked him in our Homepage interview about any research he might have done to inform this element of his story (he said he didn't know what "fake science" he could have researched, although I had been thinking maybe neuroscience and/or cybernetics or something like that), all of this shared consciousness business has just been falling extraordinarily flat with me. As someone with a degree in philosophy, I want to be interested in this. Being most charitable, however, I think it's a wasted opportunity.

Apart from the odd line or two geared to advise on some plot development (like Lex telling Tess he's going to start having himself strapped down to his bed in a locked room), no genuine forward-motion really occurs until the final pages, beginning with the scene between Bruce and Clark. I'm going to spare you my ruminations on the special suits that Batman breaks out not only for himself but also Superman, especially as they might pertain back to the fight that seemingly never happened and just what the hell has been going on in Batman's head. Now that Joe Chill is dead, it's like that never happened, either. I mean, Batman has a suit of armor, complete with insignia, ready for both of them? He really does have every angle covered, doesn't he? Next time I'm looking to make a new friend and trusted ally, I think I'll start by socking the person in the jaw and hope they never ask why. But I think I've moved past really expecting this to go in anything like a direction that would both interest me and satisfy my desire for a more self-contained Smallville, so I'm just going to let it drop from here on out. No need to thank me. Heh.

Finally, the build-up of suspense right at the end was reasonably strong, but it would have been stronger had we ended on the thugs sneaking up on Leviathan, rather than switching over to the bit between Prankster and Freeze, principally because those panels tended to muddy the clarity of the danger that the group of thugs represented. While it's obvious that Prankster has put one over on Freeze, it wasn't at all apparent to me what the repercussions for everyone else might be and just what the prank is going to be.

But maybe that's the point.

In the end, I've noticed over the weeks that the best chapters in this story, for me, are the ones that are oriented more toward action than exposition. That's not my usual disposition, but it holds true again this week.

Art - 2: I think the last time pencils switched hands they coincided with a loss in quality, but whether I remember that correctly or not, this time new pencils and loss in quality coincide for sure. With the exception of that one splash panel where the thug kills the dock worker by snapping his neck, the characters and really everything around them feel lifeless and dull here. In certain character instances, I'd replace dull with dumb. The colors, however, are strong as usual and otherwise keep the whole more or less afloat.

Cover Art - 4: Cat Staggs' work on these covers has usually been top notch, but, in this case, I'm a little underwhelmed. For one, it features a story beat that hasn't actually happened yet in the story (never mind this issue, like one of those covers featuring some twist or other on what actually does happen in the issue). I know the covers are supposed to stand for three of the weekly installments at a time, but this is the first time they've effectively shown something before we see it in the story. They didn't show much and this is more about basic chronology than the betrayal or whatever of some covenant, but just the same, covers set expectations. And this one, this week, set the wrong ones.

For the other, there's something missing in the figure work on Batman and Doctor Freeze. Superman in the center of the page works fine, but Bats and Freeze are both flat and stiff, lifeless in a way that's different than the lifelessness of the interior pencils but really just not very compelling. Very surprising, all around.