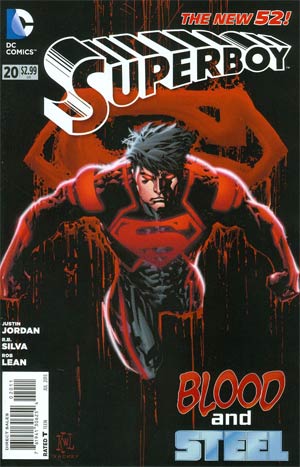 Click to enlarge
Superboy is powerless with only Krypto offering protection from an unknown assailant. Unfortunately both of them are subdued by an unknown force. This is now and we jump back to the recent past where Dr. Psycho is following Superboy around the city.

Superboy has decided to own up to his crime of robbery, when he ransacked a bank.

Via cellphone, Bunker, reminds him he returned the majority of the money and that this is a foolhardy gesture. Superboy refuses to listen but is distracted from his goal by Dr. Psycho.

The pint sized psionic tries to reach out to Superboy, offering the hand of friendship. He is more than ready to brush off his stalker when Psycho reveals he knows the secrets of his past. Using a burst of T.T.K Superboy hurls Psycho away only to be hit himself by a car thrown at him with force.

The powerful force that threw the car is none other than H.I.V.E.'s strongest warrior, Dreadnought. The target, not Superboy, but Dr. Psycho! Cue a fist fight between Superboy and this huge purple powerhouse. Using the fight as cover Psycho notices a psi signature of someone controlling Dreadnought and follows it to its source, only to find a little green man named Psiphon on a nearby rooftop.

Psycho advises Superboy psychically that Dreadnought is being powered by Psiphon's mental charge. If he cuts that off Superboy and Dreadnought can have a fairer fight. Psycho knows that Dreadnought and Psiphon were drawn to Superboy's power and Psycho has no intention of giving that up.

Dreadnought smashes Superboy through the sidewalk, face down into the sewer, while Psycho fights Psiphon physically which the little creature is defenseless against. Superboy now savvy to Dreadnought and sensing his power source dwindling grabs a chunk of the sidewalk and blindsides him into the river. Next he rendezvous with Psycho and knocks out Psiphon.

Psycho tells Superboy that the duo were part of an organization called H.I.V.E. and they will stop at nothing to capture Superboy. However as luck would have it, Psycho can help him and if they strike up a friendship then they could take down H.I.V.E. together. Expertly manipulated, Superboy agrees to Psycho's plan.

Elsewhere in the 31century future, Jocelyn Lure is working on a proton gun pistol when it literally fades out of existence from her hands. Consulting her computers for timeline aberrations she realizes Superboy has done something that has altered the future and not for the better...

Story - 3: I'll overlook the swearing, as long as it's sparingly used and so too with the awful character names. Aside from this the issue was a good solid read but relied a lot on visuals and very little on actual story. It was obviously a necessary evil to ensure Psycho and Superboy solidified a friendship but there was far more fight than mental stimuli which is odd considering the storyline. Still it is an interesting arc and I am keen to see where it goes.

Art - 3: The art was just good, but you know when you watch a series and they without warning or explanation recast a character? This is how I felt when I read the issue. The change in art is so drastic it is difficult to focus.

Cover Art - 5: Using his own words, Superboy looks pretty pissed. Perhaps for a teenage boy - even a superpowered one, a little overdeveloped on the physical side but soaked in blood Superboy does look like he really means business.