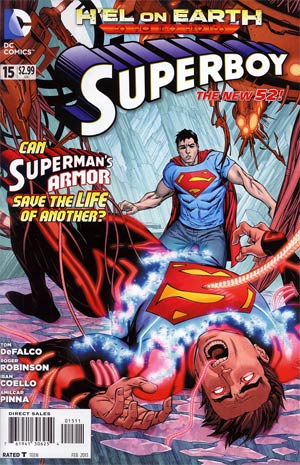 While his body is falling to pieces, his mind is having an out of body experience and he relays (to us, the reader) his origin and the past chapters of "H'el on Earth" through his monologues.

A Hazmat Team, led by a Lieutenant Stern examine the site of the El family ruckus and prepare to contain the body of Superboy while he is incapacitated. The team wonder why Supergirl and Superman ran away from the site, it's very out of character for Superman to turn chicken.

Superman, it turns out, is not far, confronting H'el in Suicide Slum. He looks up at his twisted floating 'brother' and H'el reveals he is going to resurrect Krypton with Kara's help just as he teleports away. Superman's hearing shifts back to the site of the battle, he hears Superboy about to pass away and races to beat the clock.

Defying the law, Superman enters the crime scene and, despite the protests of Stern, picks up Kon and flies away to the arctic Fortress. Strangely Superboy's mind is monitoring everything, seeing and hearing everything around him. Superboy is also having an inner conflict. He knows Superman is trying to help but since his fertilization he has been bred to hate his rescuer.

Superman activates his Fortress computers and scanners to examine the boy and resorts to a microscopic vision scan to find out what H'el has done. He discovers Superboy has a bizarre three strand DNA complex compared to the two strand all other living things have. The more shocking discovery is that H'el has set in motion an unravelling. The DNA is literally falling to pieces by the second. His thoughts turn to Kara and deep in Supergirl's Sanctuary, on cue, his cousin stirs.

H'el greets her and he tries to convince her that the vile things Kal told her were because Earth had corrupted her baby cousin but he will protect Kara from Kal's evil influence while bringing Krypton back to life. He neglects to tell her that it was a falsity created by him masquerading as Kal. Kara stays silent as H'el sets his plans in motion but confusion, suspicion and regret wash over her as she sits alone.

Superman, meanwhile has enlisted the expert help of confidants Cyborg and Dr. Veritas to try save Superboy. Neither of them seem to be able to help, the DNA unravelling is something that can't even be analyzed unless it is in an environment to contain it and hold it in place, like a cast over a broken bone. A flash of inspiration hits the Man of Steel and he shuts off the communications.

Deactivating his armor, it retracts into the shield fabric, he then places it onto Kon's chest and watches as the armor begins activation. As it reasserts itself onto its new host, it wakes him up. The suit works but as a side effect it has altered Kon's TTK, where he could previously use it in an aura-like fashion on the environment and himself, the suit seems to have shut it off, leaving him seemingly powerless. Superman stares at the shield, once bonded it should change to the family crest of its current wearer, it didn't, meaning that Kon is definitely a clone of him, at least partially.

Over in New York Jimmy is on a story, he and Lois exchange information on Superman, Supergirl and the two new metas, one a possible 'Superboy' and a new unidentified addition. Jimmy meanwhile is working retroactively and has been investigation the night Dallas was attacked at a nightclub and Superboy intervened. Two innocent bystanders were hospitalized by Superboy and Jimmy tries to intercept them as they are discharged.

The two smash Olsen's camera as they speed away in a limousine. Undeterred, Jimmy snaps a few shots on his smartphone and smirks that the bystanders were anything but innocent.

Superman, now in his T-shirt and jeans combo, tries to question Kon about his origins and his connection to H'el. Superboy is ungrateful for the help and snubs Superman. He refuses to get more involved in the fight with H'el and Superboy lashes out with stunning effect. Kon's TTK isn't gone but rather amplified and concentrated internally on himself, making him faster, stronger and more powerful than ever before.

Kon refuses to be forced into 'Big Muscles' and playing 'Super Bully' and tears the S from his chest. His pig headedness has dire consequences as he realizes the armor is the only thing keeping him alive. Without it, his body would unravel, effectively, committing suicide.

It is then as he places the shield back on himself that Kon finally warms to Superman, but he guffaws at Superman's assurance to hunt H'el and defeat him. Even more surprising is that H'el has silently teleported into the Fortress and promptly hurls them out and seizes control of it!

Story - 3: The monologues grew tiresome this issue and were a terrible plot device, as it makes no sense that he could chit chat mentally, as he does, if he is literally dissipating at a microscopic level. Still the issue threw some new elements at you. Much like the pre DCnU Conner Kent, Superboy's powers were altered, and a device, much like the perpetual youth disease he suffered in the 1990s, we now have Superboy unable to ever live without his suit, much like Iron Man and his shrapnel problem back in the old days.

Overall this reads more like an issue of Superman rather than Superboy, more owing to his predicament than poor writing, but this issue certainly felt like Kon took a back seat. His power alteration makes him a closer match to Superman, which is welcome but I really wish they could alter his whiney baby personality, especially after Superman sacrificed his reputation with the police and his armor suit.

Art - 2: Past readers of my reviews know I really dislike mix and match art chores. That opinion still holds, sorry. The art seems further unfocused by jumping back and forth randomly. There are some fantastic panels for sure but they are overpowered by the jumps. Also, just to make it clear, Superman is in his late 20s, Superboy in his mid teens. It would be good if more effort were made to make their age clearer.

Cover Art - 2: So much to dislike. Superboy beaten to a pulp yet again and some despicable typography and spacing (from a graphic design perspective). This was a poor offering as a cover, which had some great scenes inside it could have depicted. Very disappointing.