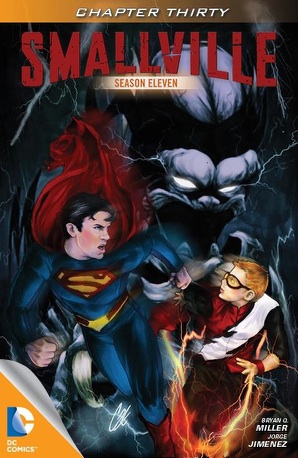 Click to enlarge
Lex continues to threaten Tess. It's all in his head.

Emil is unsuccessful in securing the after-hours help of his S.T.A.R. Labs associates and Superman and Impulse are on the way in for help investigating the Speed Demon/Black Racer.

Lois, in blue collar disguise complete with baseball cap, infiltrates Lexcorp and snags Otis's keys, which get her into Lex's office. But not ahead of Green Arrow.

Bart flirts with one Sivanna of the research team, then he and Clark mount specially-designed treadmills in an effort to confront the Demon Racer (or whatever) together. They push the limits of their speed until Clark finds himself alone (in the Speed Force, possibly) and face to face with the Demon Racer, who tells him his speed is not pure.

Then suddenly knocked back into his normal reality, Clark tells Bart he'll find some way to save him, adding "I have to."

Story - 3: If I say it here, it won't be the first time: this was a lot of running in place, and it's comically appropriate (though in an ironic sort of way) that the issue featured some actual running in place with those two treadmills at S.T.A.R. Labs.

Let's break it down using the new information metric - i.e. is there any?

Lex and Tess: Not really. The faint degrees by which this brick of a story has been dragged along the dry earth hardly count. Now he finally knows exactly where in his brain she is? Like her "soul molecule" like Sandman has over in the Marvel Universe? Maybe I'd care if I thought there was any chance we might be treated to some consideration of what it's supposed to mean for her to "be" anywhere in Lex's mind - isn't it just those dark corridors and the rooms?

It isn't possible for me to care less about this situation.

Emil/S.T.A.R. Labs: This one is hard to say, maybe because the "new information metric" isn't perfectly applicable. We get Emil characterization, that much is for sure, and while it plays as appropriately humorous given all the televisual precedent, it's really too bad he finds it so easy to rationalize the plan to steal technology from Lex. Not exactly heroic, not if the motivation is to "benefit" whatever "re-application" is planned for Watchtower (since they've already got the moon base under construction and everything). Otherwise, this scene is largely a "the story so far" kind of thing, and I'm not going to mention the apes, either.

Lois (and Chloe): Otis really is an idiot, after all. That's not exactly new information. This scene totally feels like a Lois scene, I must say, though to me it's of the "annoying Lois" variety where she's gotten herself in ridiculously over her head (for no reason, note, what with Arrow having seemingly just been there) and yet talks on the phone about "the story so far" much of the time. Anyway, best to reserve judgment on the purpose of this bit after it's been revealed whether it has a pay-off, like if Arrow's note for Lex has something to do with what Lois is doing. Because right now it just seems like contractually-obligated air time for Erica Durance's vague likeness.

Clark and Bart: Well, first you gotta love the indirect nod to the Cosmic Treadmill. This scene also provides the indisputably both new and important information that Superman can indeed contact Bart's demon. The scene's conclusion, however, and thus the issue's conclusion, is awkward, with Superman ignoring Bart's repeated question and saying he "has" to find a way to save Bart. It's supposed to be dramatic, suggesting he knows more than he's letting on (and that we just saw) and whatever it is is horrible indeed, but as a cliffhanger it just doesn't have the force of the good old car about to go off the bridge or the sun about to explode - which is to say, a kinetic, physical threat with immediate consequences, such as in this case the demon doing his "You'rrrrrrrre not purrrrrrre" thing and then launching himself at Superman. Then next ish you give us a bit of a tussle before Supes is tossed back into the lab. I'd also have liked it if Clark had managed to fit in a direct "Yes" to Bart - it's peeled baby potatoes for sure, but still it bothered me.

So, kind of an average outing. Last week I had a couple of big problems with small details and kept the grade high. This week is much more middling, all around, thus 3 of 5.

Art - 5: Jimenez continues to deliver, especially in the almost Rob Guillory-esque comic posturing among the S.T.A.R. Labs scientists. The fidelity with TV-cast likenesses is pretty good, though not hugely more consistent panel to panel than the earliest issues, when the importance of this design feature was already at its peak.