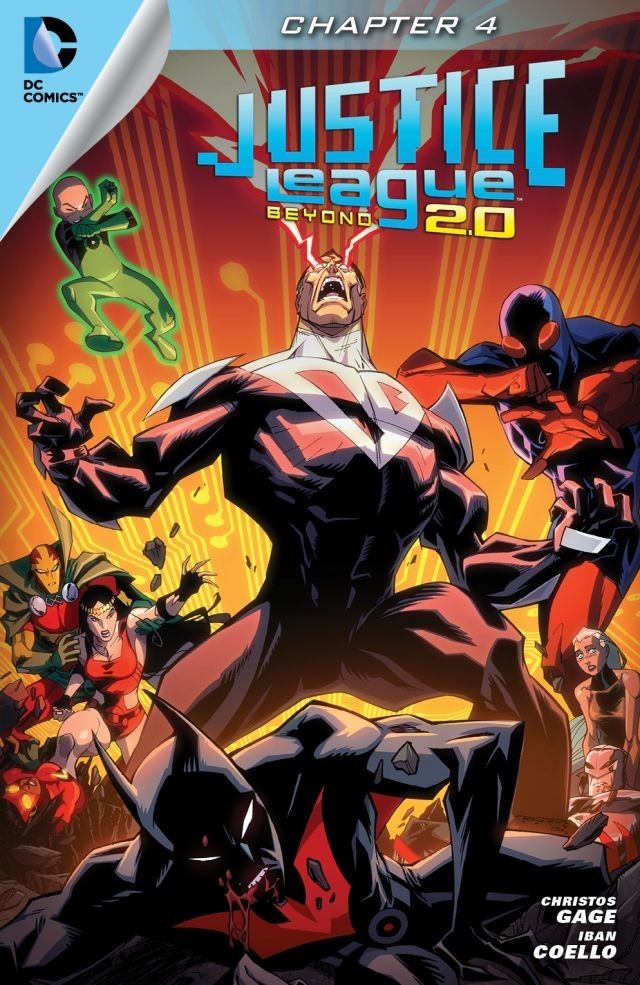 "Power Struggle: Ghosts of the Past"

Click to enlarge
Kal Kent (Superman) and his date, Rita, have their night out interrupted by a giant robot, but a powerless Superman is rescued by the timely intervention of Captain Marvel and the Justice League Beyond. Superman recognizes the design of the robot, and returns with the League to the Watchtower to further investigate. Superman alerts the League that the UFO which impacted the sun and caused his power fluctuation is from Krypton. He reasons that it could only be fomented by the activity in the Phantom Zone. Instructions are given to the League, and Superman enters the Phantom Zone. There he finds the cause of his problems: a young boy who can manipulate technology outside of the Phantom Zone, and he just happens to be the son of Jax-Ur.

Story - 4: This installment is a much better one, which returns us to the action and the conflict, without sacrificing the Kal Kent side of things. The humor of having Superman be rescued by Captain Marvel, an analogue of himself, and a Superman robot, is probably without great purposeful weight, but it does remind one of the ubiquity of Superman throughout comics in general. The characterization has been spot-on, in as much that each character delivers when they get their light, regardless of how limited it may be. The Flash is a comic zip; Barda is a brickhouse of wreck-shop; Warhawk is a bruiser both physically and verbally, and Captain Marvel is... well, that jury is still out. The fact that he switches places with Shazam is very curious, especially since he does it to use magic against the Kryptonian warsuit, when Marvel has magic abilities of his own. Superman comes across very well, as he's kept to his core in that: 1) He helps others. 2) He never gives up. He's willing to put his body on the line to protect Rita, and doesn't hesitate to go into the Phantom Zone to investigate the cause of his "power struggle".

The opening scene of the Phantom Zone is excellent, and one can only hope that other writers take note. Superman is accosted by criminals within the Phantom Zone, and they back down when he says:

That scene is what so many get wrong about Superman. He doesn't have to be a glowing, red-eyed fright to be effective. The reputation of the Man of Tomorrow is enough of a deterrent to sort out the chaff from the real evil he has to chase, and the snarl on his face, almost like Elvis about to croon to an audience of anxious teen girls, is priceless. It shows disinterest and disgust, without Superman having to go overboard and look like a frothing mad villain. At the end of the day, he's still Superman, an incredible force to be reckoned with, and anyone with sense knows that.

The positives and pleasure of this read do give way to the use of Krypton in yet another Superman story. In one year's time we've seen Krypton in every medium of Superman, and we're still getting more. I love the science fiction aspects of Krypton, and the Phantom Zone is high on the list. When you think about it, the Phantom Zone projector is one of the most powerful weapons in the DC Universe. No one can resist it, and it's never been fully explored to surfeit my interest. However, we're on Krypton overload between its usage in JLB 2.0, the Adventures of Superman, and the coming Return to Krypton crossover in the New 52 books. I can understand why, as Krypton is always fresh territory for stories regarding Superman, and free of certain continuity inhibitors that some writers may feel, but there's just too much mining of it right now, for my salt.

Art - 4: The design of the Phantom Zone, with its hellish red color and demonic, wraith-like inhabitants isn't exactly new. Page 15/Panel 1 gives the impression of an angel entering hell on a mission, or, if biblical imagery isn't your taste, Dante entering Inferno to begin his sojourn, which is pretty much the same thing. ;) Good stuff nonetheless.