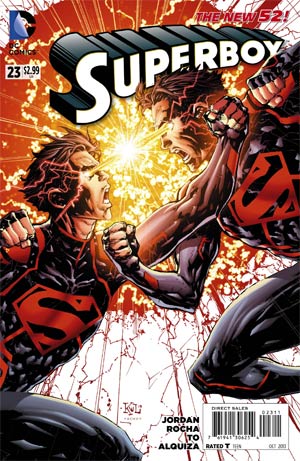 Click to enlarge
Krypto, Psycho and the students attack Superboy. He in turn attacks the manipulated Krypto slamming him with TTK into some lockers while knocking back Psycho. The crowd closes in and then suddenly without warning turns away and runs in fear.

The creatures beg for Conner to stop but Superboy uses his TTK to knock all the runners off their feet. It works but he senses fear and a sense of wrongdoing for his actions. This is accentuated when the monsters revert to human form and run away screaming.

Conner closes in on Eliza and soon realizes he has been faked out. His frightened former friend is not to blame and using his new psionic detection vision he decides to scan the crowd. He spots the aura around a typical young student who uses the scared crowd as cover to escape back into the school.

Superboy instructs Krypto, now normal again, to use his 'supersniffer' powers to track down the runaway. Krypto dashes after his prey with Superboy in hot pursuit. The crowd in the halls presents another challenge but Krypto steps in again and uses his 'superwoof' to knock all of the students down.

Krypto sees the girl lock herself into a closet and knocks the door off its hinges. Superboy nears the closet and is shocked to see Superman's best friend thrown through a wall with tremendous force. Aside from Superman himself, only a few people on the planet could do that to Krypto and since Superman isn't a student at McDuffie High, Superboy is shocked to see... himself!

Being a clone there is a good chance there are multiple Superboy's out there but after all the weird mind games Conner is almost relieved that he has something to hit. A fight ensues all over the school, through walls, ceilings, until a temporarily beaten Superboy finds himself full circle next to Dr. Psycho's body. Eliza is also there but when Conner sees her and her intense fear he realizes there is something else she's frightened of, not evil Superboy, not Conner her friend... something else. Seeing a reflection he notices evil Superboy is not really there. Conner asks to borrow Eliza's cellphone and uses the camera on it to trust what is fooling his eyes.

The camera reveals the student using psionics to disguise herself but before Superboy can do anything someone knocks out the girl, named Shift, before revealing himself as the villainous Psycho Pirate.

Story - 2: A mess of a story. More annoyingly a fake out. I saw the cover and given that just weeks back we read a story about Superman and Lois' baby being kidnapped to become an evil Superboy in the future, I foolishly took the cover as an indication that this meeting was going to happen. Instead we had yet more mind games that stumbled around with poor direction. Are the students attacking? They threatened to but the next moment they are racing away in fear. Next we have Superboy abandon his identity of Conner and Krypto suddenly having the powers of super sniff and super bark, more of a silver age thing I guess but a lack of cheese would be appreciated. Then we have a non villain named Shift being the evil mastermind from taking over her... wait what IS the point of these elaborate machinations? The Superboy/Dr. Psycho/Krypto team stumbled onto the school last issue for no good reason and now it just so happens yet another H.I.V.E escapee is the mad evil manipulative genius. Motivation: none. Am I watching Pokemon suddenly because that is what the title has devolved into. Also if Superboy can see a mirror revealing evil Superboy isn't real, why does he need to borrow Eliza's cellphone to reaffirm this, moreover why would Eliza even hand it over? To top it off the 'big villain' is Psycho Pirate and he reveals himself just to boast? Really? Lame.

Art - 3: I am not sure the coloring works very well with the first half of the book's pencils. The pace of the story means you don't get to concentrate too much on the art, so the lack of consistency is manageable to read. I like the art more so in the second half though, a nicer clean style.