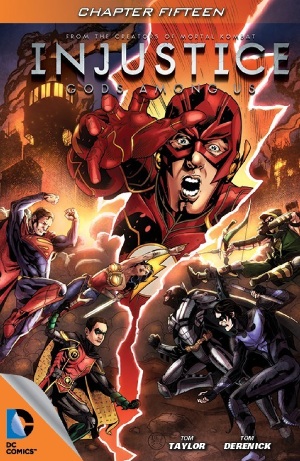 Injustice: Gods Among Us - Chapter #15

"Injustice: Gods Among Us" - Chapter Fifteen

Click to enlarge
Show-down at Arkham Asylum. Batman and Nightwing stand between Superman, Wonder Woman, Cyborg and Robin, trying to prevent them from moving the inmates to a more secure location. They begin with Zsasz: his cell door opens at Cyborg's command and before he can say more than a "Yes" in response to Batman's exclaimed "No," he disappears, taken by the Flash in a flash. Mad Hatter is next but he says he is content to remain where he is. Not that that matters. Poof. Batman warns Cyborg not to open any more doors and, when Cyborg ignores the warning, activates a computer virus that electrocutes Cyborg and shuts him down. No one is happy with Batman about this, but Nightwing urges calm.

Meanwhile, Green Arrow has arrived at Arkham, Harley Quinn in tow, intending to admit her. When the security guard points out that other super-heroes are already on site, he leaves Harley in the guard's custody and runs off. Harley knows the guard by name, asks him how many times she's broken his nose (three times) and proceeds to break it again, knocking him out. Then she locates one of the asylum's special prisoners and communicates with him that she plans to release him.

Back at the show-down, Cyborg determines that Batman's virus was installed the first week the two met and gets especially angry, which even the nearby Killer Croc describes as "pretty evil." Suddenly, a green arrow sinks into the cement at Batman's and Cyborg's feet and Green Arrow shouts for them to break it up. He starts to explain what he's doing there but is interrupted by the voice of Harley Quinn over the public address system. She tells the inmates that Superman is probably going to kill them, just like he killed Joker, so she's letting them out to defend themselves and also sending in some help. Just then the room shakes and an arm reaches up through the floor, grabbing Robin by the head and crushing him in a great, grey grip as he disappears back down the hole, reciting some verse... Born on a Monday... died on a Saturday...

Story - 5: Just to change it up this week, I decided after the second reading of the week's issue to leave aside all of my normal objections about the title's overall arc and the specific plot points and characterizations that have turned me off and just consider it on its own, independent of anything that has come before. That isn't, I don't think, the most intellectually honest approach to reviewing, but it's still better than being promotional of whatever is being reviewed but not revealing that you've been paid to do so. Disclosure is usually better anyway, but in this case it was a decision I made based on the singular (if relative) excellence of the issue simply as a super-hero comic book.

Forget about backstories, canon, truth, justice...all that stuff. Imagine it as an entry in some blind-judged contest, and it almost certainly wins. A lot of it is the art, a fact so total and true it bears mention in the prescribed "Story" section of this review. Twice. Really, the art is a huge part of the success of this issue. But beyond that, the dialogue also conveys small nuances in the way the several characters involved interrelate and just generally presents a reasonably compelling series of exchanges that I think would leave me, if I didn't already have the information, wanting to know more.

Now, fundamentally, it's impossible to truly decontextualize like this - and anyway, the story itself depends on you knowing more than a little about who these characters are and how they know each other. Or it assumes you know this stuff. Either way. So, yes, it's a bit corny that Grundy comes through the floor reciting the nineteenth-century poem from which he takes his name, or that the only bit of dialogue Riddler gets is the truly stale "riddle me this..." It also stands out when Harley says "Mistah J" because she's not otherwise really given the Brooklyn accent at any other point in her dialogue. But otherwise, this was a strong character piece that I'd read again if it weren't for all those other problems I have with the title generally.

Art - 5: This was probably the best art this book has seen. Seriously. Just incredible. The single panel of Mad Hatter when his cell door is opened might have been enough to cinch that distinction, but really, pretty much every panel in this thing is awesome. It's so good, I'm not even going to spend any more time talking about. You have to see it for yourself. (Well, uh, look - ultimately, I've seen better but for this title? For this title - this extended advertisement - the art was totally awesome.)