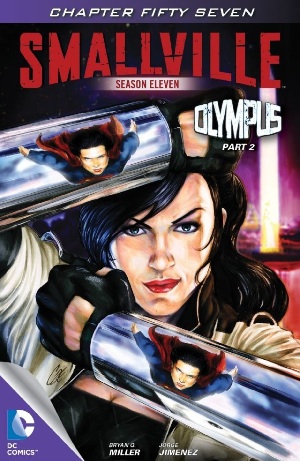 Click to enlarge
Lois and Clark visit Martha in Washington, during which they discuss logistics, the ethics of having had Lionel Luthor forge Clark's birth certificate, the woman who saved Martha from The Cultists (the teleporting guys from last week), and the D.E.O.. Clark also retrieves the teddy bear of a little girl who left it at home in Florida but seems only just now to have realized it and to begin to cry.

At the D.E.O., Director Bones is angry and annoyed but his team stands firm: their response time was exceptional and they extracted Bones and his driver from danger before the authorities arrived, even if The Cultists did manage to escape. A consultant in London is playing games with them and Bones is just generally not impressed with the current state of agent work.

Just then, a certain Kent arrives at the entrance to D.E.O. headquarters. Bones thinks it's Martha, and when he's told it isn't, he says to send Agent 47. For his part, Clark thinks he's in the wrong location, if the pristine inlet he's at is any indication.

It isn't, as the water roils and a lift emerges from its depths, out of which walks Steve Trevor to greet Clark.

Story - 4: A few too many in-jokes delivered via Lois's dialogue for my taste, but on the whole this is a good return from the commercial break. That is to say, this arc is starting off like classic Smallville: last week was the high-intensity, pre-credits opening act and this is the eased off return from the break that widens the angle and sets up pending complications. It's good.

(I really don't want Steve Trevor to end up being a stand-in for Oliver, but for now I'm ready to go with this, handshakes and "friends call me Steve" and everything notwithstanding.)

Notice how I don't talk about the exposition boxes and whatnot anymore? Yeah, seems to me Miller has finally gotten to a happy place with these things. They used to be dreadfully inconsistent, plus there was that self-imposed constraint back at the beginning about presenting the comic the way the show was presented, which meant avoiding exposition boxes and other comic book conventions. I didn't immediately think that was unnecessary, but I came to. Now, they work, which I can tell because I rarely even notice them. Here, with "So very many pies later," it's even naturally playful, because extreme. I am not complaining.

I am complaining, however, about a sequence of dialogue between Lois and Clark at Martha's house. It's either blindingly obvious or genuinely problematic, nothing in between. Either way, I can't follow it:

LOIS: Once those pies have run their course, we need to divide and conquer, Smallville. I'll look into the D.E.O., you look into the woman in -

CLARK: I'll handle the D.E.O. Wouldn't be very smart for that to happen right after Clark Kent has been asking around town about her, would it? Odds are, Superman will wind up dealing with this vigilant at some point. "Plausible deniability," right?

Logic? Really? For what to happen? Does the pies' course end at the woman in - ?

This Bones guy is quite the character, though, amirite? Looks foul but feels fair, all that rot? Yeah, more of him and his electronic cigarettes I could handle. The mention of Conner is also good continuity, whether we see him anytime soon or not, as is bringing Steve Trevor back in before we get back to Wonder Woman.

Yes, all in all, strong second act.

Art - 5: If Dulles International Airport is in Washington, D.C. (i.e. for all intents and purposes the East Coast of the United States), where is Superman going when they show him retrieving the little girl's teddy bear? It looks like he flies between Florida (which we can see on the ID of the girl's mother [presumably] when Clark looks through her purse) and Washington State, way off in the Northwest. Am I missing something? Otherwise, let Jimenez be Jimenez.