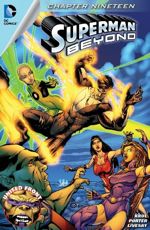 Click to enlarge
The Justice League have joined Superman in the attempt to smooth out the conflict between the Trillians and the Mangals. Although the League makes great effort to get the two enemies to stop their battle, it's all in vain.

After Skirg and his soldiers break onto the bridge of the main Trillian ship, the fleeing Epoq convinces Tyro to launch the aforementioned bomb, an untested weapon that could potentially eradicate the entire planet.

Story - 2: This entry in what has been a superb title was rather flimsy, held together mainly by the excellency of its pedigree.

Things are getting a bit messy, and although Krul still seems to have a handle on the story's direction, the concept of a digital-first comic book is catching up with Superman Beyond. This doesn't mean I'm disenchanted with digital comic books. On the contrary, I wholly support the continued advancement of the digitalization of the industry and find that some of the best comic books your money can buy today are digital-exclusive (see Insufferable, High Crimes and Theremin, among others). However, there is a contrapuntal nature to the sweet music of digital comic books. We can often be treated to compact plots played through snappy panels delivered over many mellifluous issues. Or we suffer through a cacophony when the story can't flow well enough from issue to issue. This may be true of any medium that a comic book story is told, but the limited space and panels that have become the norm for digital comics make the chance for a mind-numbing racket a realer possibility. This issue of Superman Beyond was a doozy of a katzenjammer. Break out the eye-plugs.

Things have slowed down so much that there's little difference between this issue and the last. Just throw in the Justice League and you've got pretty much the same issue we read last month. So, I don't have much more to say. This was just gross filler in a part of the medium that is always dangerously close to overstating plots.

One last point: when Barda suggests it's ironic that she, too, is helping the Mangals save their own lives, it's actually not ironic. I blame Alanis Morissette.