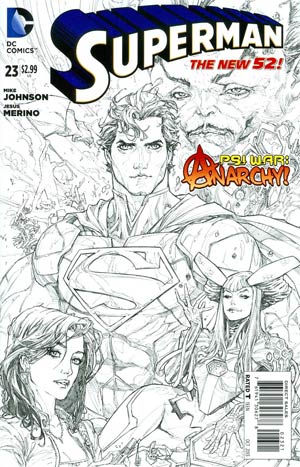 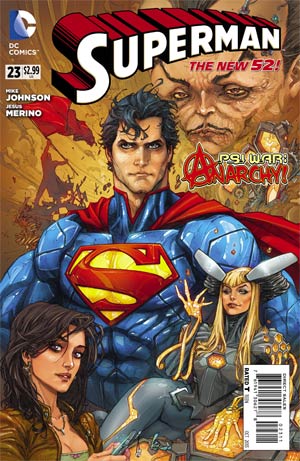 Click to enlarge
Four years ago, a nerd, one of Brainiac's twenty PTI (Psionically Transmitted Infection) chosen runs into the packed Metropolis Museum of Art and picks up the legendary Medusa Mask, puts it on and immediately becomes the Psycho Pirate.

In the present, we rejoin Superman who has been captured by the Queen of H.I.V.E. He is covered in psionic ectoplasm as it is trying to draw him into a H.I.V.E. mind with the rest of the humans on Earth. With all the humans merged they would make a perfect gift for Brainiac's return.

Superman overcomes the slime and attacks the Queen with heat vision. She in turn attacks in Psionic fashion and Superman realizes his limitations against mental attacks. Queen manifests eight psi-clones and they attack the Man of Steel together, overcoming him once again.

Across the city, Lois Lane is now one of the twenty after becoming an unwilling vessel [SeeSuperman Annual #2]. Her boyfriend Jonathon(?) sits by her side while she is in hospital deep in a coma. Almost in tandem with the attack on Superman Lois awakens and screams and mutters his name.

Back with Superman, an angry Hector Hammond attacks destroying the Psi-clones. The Queen is not easily beaten, as she has waves of psi-zombies under her control, including Superman. She sets them upon her attacker.

Hammond flips half of those zombies into shadows of himself and turns the crown upon itself, worse still he is willing to kill and manipulates two policemen to kill each other. Reveling in the chaos he spots Queen's prize, Superman, hidden in the crown and takes delight in turning him into a cranially challenged soldier.

Queen attacks but a smug Hammond reveals he isn't even there, he is back in the H.I.V.E base safe from harm. Queen gives chase but as she does her grip on Superman weakens enough to awaken him. The Metropolitans attack but Superman can't bring himself to fight them and chases down the Queen back to her former base.

Superman wastes no time racing to the heart of the base and is shocked to find it turned to rubble. Hector Hammond is normal again with no powers, broken and beaten. Superman digs him out of the rubble and shrapnel and quizzes him on Queen's whereabouts. Hammond reveals Queen is dead and Superman should run. A puzzled Superman turns to meet Psycho Pirate who scans his mind quickly and asks...

"Mind if I call you CLARK?"

Story - 3: I wish the book titled Superman was more focal on the character of Superman.

Psycho Pirate has his introduction THERE. But HERE we have it simultaneously anyway. Sigh...

The action is decent though Superman is far from the main character, instead presenting a tit for tat battle between two pretty powerful but dull villains. The overall story is a good one if the massive foreshadowing in Superman Annual #2 and recent Superboy/Dr. Psycho stories have eluded to plays out to the promise.

I am not sure about Brainiac's mind infection plot nor why they made Queen (Bee?) out to be such a big deal only to have her die so promptly (I assume she wont be truly dead) but I'm along for the ride nonetheless. Superman had barriers placed to fight mental attacks and control by the New Gods and a Mother Box but they seemingly forgot that here.

Recently the writers went from Jonathan Carroll to JonathOn why is that? A stupid thing to obsess over but it's the virgo in me.

Art - 4: In places, spectacular, in others seemingly rushed.

I am sure this is due to the interpretations of the line work split between a duo. The inks seem a little too heavy in places and too sparing in others though in those cases it's more so the colorist can have some freedom to explore psionic effects I think. I would like to ask for more scenes of Superman please!

Cover Art - 4: I like the cover. Lois looks great, Superman looks a little young but that's a fault throughout the titles - one minute he's a man next he looks like Superboy's little brother. The fault here is the armor. It looks so bulky and less cloth like that it dwarfs Superman. Queen (Bee) and Hector Hammond are decently rendered but no matter what you do with ol' fathead he always looks a bit embarrassing.