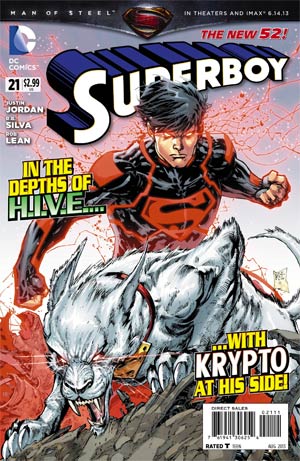 Click to enlarge
In the Arctic, at the Fortress, Krypto makes his way outside and is surprised by two attacking polar bears. Knocking out the pair Krypto begins racing through the soft snow.

Over at Superboy's apartment, he sits upon his throne waiting for Psycho to complete his research. Dr. Psycho has been collating every incident he can find relating to psychic activity in the city. If he's right H.I.V.E will have the same results and be hunting for the same as them.

Psycho explains that though he knows some information from the depths of Superboy's mind, he can't access it all due to powerful mental walls that only H.I.V.E has the power to break down. Using his astral body Psycho travels across the city to a powerful psychic presence and then he comes across a young girl named Sarah.

When Psycho realizes he knows the girl he tries to communicate with her. She recoils in terror and it is at that moment Psycho realizes that it is another psychic force that has her frightened, a monstrous beast named Decay. The next shock is that Decay can touch Psycho even in astral form and when he does he tries to attack him. If not for Superboy waking his body up Psycho would have lost an arm to a H.I.V.E. warrior.

A thump at Superboy's door frightens Psycho but assurances are in order as Krypto has arrived! The two visitors to Superboy are immediately suspicious of one another but when Superboy vouches for each they make their way to find the mysterious Sarah. It's not hard to track the girl down, Sarah is hunting through dumpsters for some food. She begs Superboy to help her to hide from Decay before he comes for her, he agrees and takes her to a Big Burg for some much needed nourishment.

The questioning begins and Sarah reveals her earliest recent memory is being held in a facility where Decay attacked killing those attending to her. The facility was destroyed and all it's occupants escaped. She remembers Psycho being a resident there and he reveals to have been in H.I.V.E and to have been able to see his astral form, she must have some powers. Psycho also offers some bad news. If they could find her so easily, followed by Decay, then H.I.V.E can't be far behind.

Distracted by some bad food, Superboy is taken by surprise as Decay materializes and grabs Sarah. Krypto leaps up and snatches the girl from Decay's claws but when Superboy tries a counter move he is surprised to find his TTK is ineffective, even though it should work on anything with a physical presence. Worse Decay can't be touched by Superboy's fists but his touch can decay flesh!

As Psycho hides Sarah in the Burg kitchen he watches the attack and attempts to help in astral form as he was able to touch Decay when the villain attacked before. To his astonishment even an astral attack doesn't work, so he returns to his body and unleashes a kitchen knife.

The theory is right and Decay races to aid Sarah. It's then that they all realize that Decay is a manifestation of Sarah's powers. When H.I.V.E tried to experiment on her Decay attacked, he IS Sarah. The young girl was unaware of the link and begs for help to stop it all. Superboy looks in horror as Psycho and Krypto launch an attack but knowing they can be hurt and they can do no damage he grabs a teary Sarah and uses his TTK to interrupt blood to her brain for just a second.

It works and Sarah is knocked out. Dropped into a comatose state Psycho opts to repair Sarah's mind and implant happy memories. With Sarah 'happy' albeit with a false memory, Decay cannot manifest again. They allow Sarah to be taken to hospital and head home. Psycho tells his friend that Sarah was the reason he is free today. If Decay hadn't 'saved' everyone he wouldn't be here, so the least he could do was save her in return. H.I.V.E erased her past and he wants to make sure they can't abuse her or anyone else in the future.

So they three now prepare for the next strike...

Story - 4: A great tale, a bit odd to have Krypto arrive/hunt for Superboy for no reason and the overall reveal was rather predictable but as a whole the story was a very enjoyable one that ups the ante for the Blood & Steel storyline. I have never read any Dr. Psycho stories past but I'll admit he's a fun addition to the cast. The throne was a real odd moment by the way...

Art - 3: Ugh! I hate jumping between artists. The exception here though is that the story is a fun fast paced one that doesn't really slow down so the switch is quite unnoticeable unless you really scrutinize it. I would prefer one artist per one issue unless it served the story in some fashion but we can't have everything.

Cover Art - 3: Superboy looks pretty cool here and ready for a fight, his parting has changed odd but I spotted it. The expression is the same the physically imposing stance is saying, "I'm ready" but so did last issue, what are you waiting for kid? LOL! Also though the dog on the cover looks really ferocious, it doesn't look like Krypto at all which is a shame.