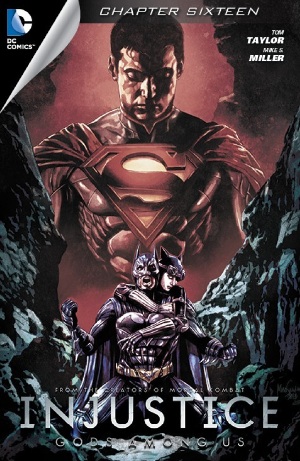 Injustice: Gods Among Us - Chapter #16

"Injustice: Gods Among Us" - Chapter Sixteen

Click to enlarge
Harley Quinn is ecstatic - the inmates of Arkham Asylum are putting up a strong fight against Superman and the Justice League. Solomon Grundy still has Robin's head gripped in his hand and Nightwing suggests that Superman "release some of that tension," so he does... First by using his heat vision to cut Grundy's hand off and then by flying through Grundy in a burst of fists and blood. Nightwing then pries Grundy's severed fingers off Robin's head, freeing the ungrateful little...

Just then, Batman appears, asking Robin if he's ok. They argue a bit and then Batman says he's going to "take care" of Grundy, a method that involves the placement of explosives on either side of Grundy's head, resulting in one headless super zombie and Superman complimenting Batman on the "Nice work."

But Robin isn't keen on putting the inmates back in their cells, per Batman's orders - he doesn't think they can be helped. So he continues to lay a beating on them. And when Nightwing chastises him, telling him "Robin doesn't beat people once they're down," Robin screams at Nightwing to stop telling him what to do and throws his baton, striking Nightwing a fatal blow to the temple.

When Superman, Wonder Woman, Flash and Batman return from finishing with Grundy, Robin is distraught. Tears streaming down his eyes and kneeling at Nightwing's side, he apologies and says he didn't mean it. But Batman is beside himself with shock and grief. He lurches in, pushing Robin out of the way and yelling "Get off of him!!"

Story - 2: I appreciated the way we were pulled back a couple of weeks in this issue to see that Batman's inner monologue (see chapter 14) about the parallels between his parent's death and "his son's" death was effectively about Dick, not Damian, all along. I sympathize. And that's about the only thing about this issue that I enjoyed. Superman flying through Grundy was... well, disappointing. It's not the gore - one of my favorite comics is Robert Kirkman's Invincible, which has to be one of the goriest superhero books going - it's that we only see gore in this book when Superman is creating it. But also - flying right through Grundy and then showing us the big hole through his body? As long as we're not scraping the exact bottom of the theatrical barrel, right guys? Yikes.

I'm also annoyed that Damian kills Dick in a moment of petulance rather than defense or something less... well, unjust... though he's probably the best choice of a character to do so. But it's still a stupid way for Dick to go out, under the circumstances. The accidental nature is fine and thematically appropriate (precisely because it is unjust), except it's not really believable as an accident, seeing as it's Damian Wayne throwing the baton - this is not a character who tends to miss. It also aligns with other precedents already set (Superman accidentally killing Lois), and is dramatically more interesting than having the killer be, say, Calendar Man, but it falls flat for me. And notice that, this time, Superman doesn't stop the baton. He then consoles Damian with an "I know, son." That's probably significant. But why is Harley crying about it?

Seriously, is this thing over soon?

Art - 3: Compared to last week, these pencils were lame. Otherwise passable, with one or two especially excellent panels, such as the introductory shot of Harley and the "splash" of Grundy holding Robin by the head and Wonder Woman impaling Grundy's arm.